Wondering which Octave pedal is right for you?  As guitarists, it’s safe to say that we can never have too many pedals. Octave pedals are a fantastic tool for gigging guitarists and players in a band without a bass guitar who are missing that low-end, and they are also growing in popularity with live-loop guitarists and recording session musicians who want to completely transform their tone too (without needing the addition of a bass guitar).

Commonly know as harmony or modulator pedals, octave pedals exist to elevate your signal to the next level.

If you want your guitar to sound like a bass, or are just experimenting with your sound, then an octave pedal is a fantastic place to start. let’s look at our top 10 picks, and get started with this buyers guide! 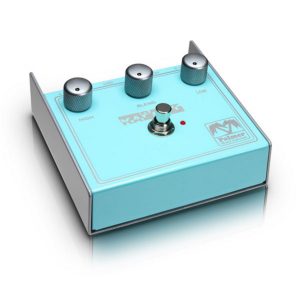 We just had to kick this guide off with this futuristic number from Palmer, the cool blue Kaputt Octave pedal! Palmer like to keep things simple, which is often a good choice when it comes to pedals and footswitches.

The Kaputt pedal comes with both high and low mix switches, with a blend switch to allow you to really get stuck in with creating your own modulated sound. The high-end blend also assists in slightly distorting the signal, so if you’re looking for a sound that’s a little more fuzz than pure octave, then the kaputt can deliver.

Our only criticism is that the pedal is a bit large, so if you’re looking at gathering a compact pedalboard for your live setup then this might not be the one for you. 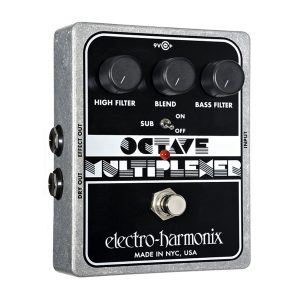 Electro Harmonix can not be left out of any guitar pedal guide. And whether you’re looking for a stompbox for rock, jazz, or experimental music, then the Octave Multiplexer is guaranteed to deliver!

The multiplexer differentiates itself from other octave pedals because of its versatility. This pedal is also favoured by many singers and vocalists who want to transform their voice, which makes it a fantastic tool for gigging singer songwriters, live buskers, and youtube artists wanting an all in one voice transforming solution (without having to stick a tube in their mouth a la Bon Jovi!).

This pedal is much bassier than others, so if you’re wanting that authentic bass sound whilst maintaining the original high-end of your signal then check this one out. 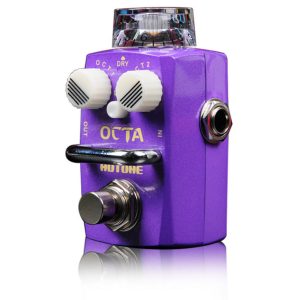 Get a load if this little beauty! A great choice if you’re stuck for space with a pedalboard, or simply want a portable modulation solution and don’t want to be bogged down by a larger multi-fx board. The Hotone Octa is compact, durable, and really does pack a punch.

Ideal for bass guitarists as well as those of the six string kind, the Octa comes with two switch options; octave voice and dry signal control. What does this mean to the everyday player not versed in octave processes? It means that whether you’re playing lead and want an octave backup, or if you’re looking to play chords and don’t want the muddy low-end sound that occurs with most modulation pedals, the Octa can deliver.

If you’re looking for more than the above, then keep on reading. If you’re a rhythm playing looking for an octave pedal, then give the Hotone Octa a try. 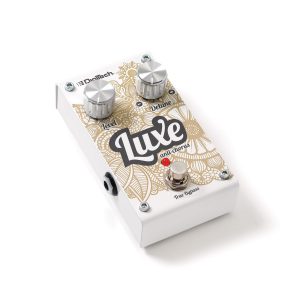 Now, if we were giving out guide medals for the best looking octave pedal, then it would clearly go to this one. This is also much more than a standard octave stompbox, so let’s look at what Digitech have mustered up here, who it’s for, and what it sounds like.

Digitech are famed for their years of crafting revolutionary pedals, from the analog overdrive to the recent re-release of the Jimi Hendrix Experience whammy/wah-wah pedal. The Luxe combines their unique approach and love for going the extra mile when it comes to emerging into a pedal sector.

The Luxe is actually a branch-off from their famous whammy pedal, just taken much further. The ‘anti-chorus’ part of the name refers to the consistent modulation of the polyphonic detuning effect, resulting in a combination of octave swells and modulated tones.

The Luxe is amazing for players of all varieties, but is not necessarily an octave pedal (as octave pedals go). We recommend this for experimental players looking for an alternative breakdown or bridge sound, or even as a supplement to a standard octave pedal for those players who want that little bit more. 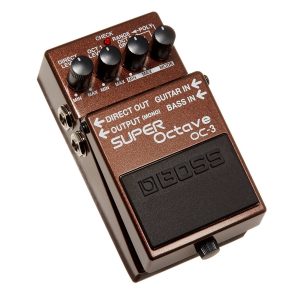 It’s all well and good having a pedal that ‘kind of’ does an octave shift, or ‘kind of’ does a modulation, or even one that specialises in a certain sub-section of the octave world (i.e. the anti-chorus above). And there’s nothing wrong with that, but eventually your musical progression and craving for tonal excellence is going to want more.

This is where the OC-3 Super Octave from pedal behemoth Boss comes in. You’ve probably already heard about this pedal, and there’s several reasons as to why it’s our top pick in this guide.

First of all, the pedal works great for both bass and standard guitars. It also works well with seven and eight-strings, and has the octave range capable of dropping the already dropped tunings of a metal guitar.

The OC-3 is the standard Oc-2 on steroids. With polyphonic octave effects a plenty, the Oc-3 includes octave switches (controlled by dropping octave-by-octave), poly octave for specific tonal ranges, and an overdriven selector so you can add a distorted tone alongside the octave effect.

The Boss OC-3 combines the best of all pedals within this list, so if you’re looking for a pedal that does it all you don’t need to look any further. 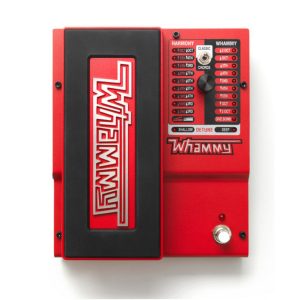 Some may argue that this isn’t a whammy pedal. So may argue it isn’t an octave pedal. And some would argue it’s the best of both worlds. Whatever you want to call it, we love it, so let’s take a look behind the Whammy curtain.

Arguable made famous by metal players such as Dimebag Darrell, the Whammy Pedal is often used most for incredible harmonic dive-bombs and solo squeals which the standard electric guitar/whammy bar combination would never be capable of alone. But this is just scratching the surface of what this pedal is able to achieve.

The 5th Gen version of the Whammy includes tone modulation, pitch shift, harmony, detune and octave settings, and a true-bypass for no tone confusion.

This pedal is awesome for players looking for an all rounder that can drastically transform their tone. Particularly if your whammy bar drops are not enough and you want to drop more octaves when you hit that pinched harmonic! 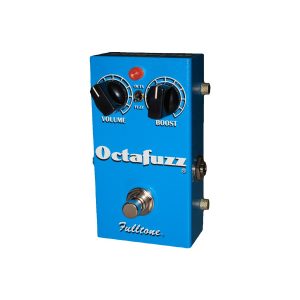 The Octafuzz is truly an octave pedal for the gear lovers amongst us. An exact circuit replica of the Octavio pedal used by none other than Mr. Jimi Hendrix, the OF-2 is incredibly stripped back and packs an octave punch that many would not expect from such a compact pedal. Like many of these old school pedals, the formulas and circuits are tried and tested, so not much has changed… But let’s look at what you can get out of the pedal, and why Hendrix was a fan.

Now that we’ve mentioned it, you may notice that the OF-2 has a similar build to the Dunlop Octavio which was made famous by Hendrix. So what’s the difference? Fulltone have crafted the Octafuzz to operate almost exclusively as a high-end driver, amazing for manipulating lead tones whilst maintaining a crisp, true signal. The simple boost switch means you can keep the modulation to your exact levels, with an octave-up switch for further fuzzy goodness.

Want to jam to some Crosstown Traffic? You know what to do. 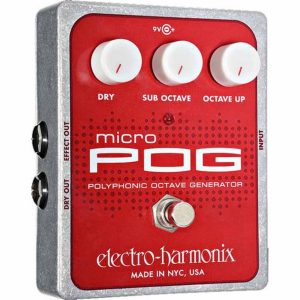 When it comes to discovering a pedal that has the capability of transforming your 6-string into a 12-string, we’ve never encountered one better than the Micro POG. Electro Harmonix are certainly no strangers to the world of modulation, yet the Micro POG stands out from the rest as a unique pedal for manipulating octave tones. Let’s take a deeper look.

The first thing to note is that the POG allows you to control the dry signal, and the sub octave range of the signal, as well as the overall octave options. The POG is an award winning modulation pedal purely based off these capabilities alone, but that’s just the start.

You can transform your guitar into a bass, a 12-string, and even an organ with the available octave controls.

This one isn’t necessarily for a lover of just octave effects; this is a polyphonic tool ideal for guitarists looking to shift their tone into something completely different. 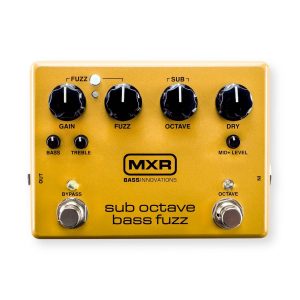 There’s no denying that MXR make some amazing pedals. Mostly known for their distortion pedals, we couldn’t leave the Sub Octave Bass Fuzz from them out of this list. The Bass Fuzz does exactly what it says on the tin, and more besides.

The Bass Fuzz focuses on manipulating low-end tones, combining deep octaves with the thick fuzz of a distorted bass. This pedal is also unique as it has a drive option, alongside fuzz, octave and dry signals. This pedal is built for those players not only looking for a distortion boost but also a complete, thick, heavy low-end transformation. No need to combine with a distortion pedal, just stomp and get going.

We recommend the MXR Bass Fuzz for lovers of bands like Royal Blood, who want that low-end tone with the added fuzz distorted sound. 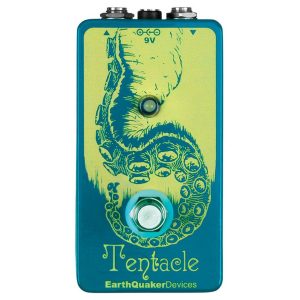 We just had to finish this octave pedal buyers guide with the Tentacle Analog from EarthQuaker Devices. Not only does it look awesome, it’s also nice and compact, so if you’re struggling for room or just want a smaller pedal at a lower price, then the Octave Up is perfect for you.

Based on the vastly-praised Hoof pedal (another EarthQuaker devices winner), the Tentacle is supremely simple with a singular analog switch and stomp option.

The best thing to do is to check out the demos below, and if this pedal sounds appealing to you, then we suggest you snap it up. It’s the least hassle out of all the pedals in our guide, and makes travelling with a pedalboard very easy as the setting can not be bumped around in transit. You get the same sound each time, in a beautiful compact box. Perfect.

We can write about circuit boards and modulation algorithms for weeks… But what do these pedals actually sound like? Here’s 5 of our favourites from the guide so you can see listen to their octave goodness.

Who are octave pedals for?

Octave pedals are primarily used for adding an extra octave to the signal of your guitar. Whether that’s low, high or dry is totally up to you. Many pedals come as a fuzz/octave or modulation/octave combo too, so the world really is your oyster.

This all depends on what you’re looking for. Modulation effects generally combine octave effects with a fuzz and additional modulation, such as making your guitar sound like a 12-string or utilising a whammy effect for extreme octave boosts (both low and high). For the purpose of this guide we’ve tried to stick to octave pedals, however if you’re looking for a modulation effect then the multi-effects and those branded as modulators with an octave selector are the better option.

When it comes to just octave pedals, those like our winner the Boss OC-3 work perfectly, with no distractions or other options to muddle with your octave-driven tone.

Loop and Octave pedals go together perfectly. If you don’t have a bass guitar or just want to lay down a bass rhythm, then there’s nothing better than throwing down an octave bass loop.