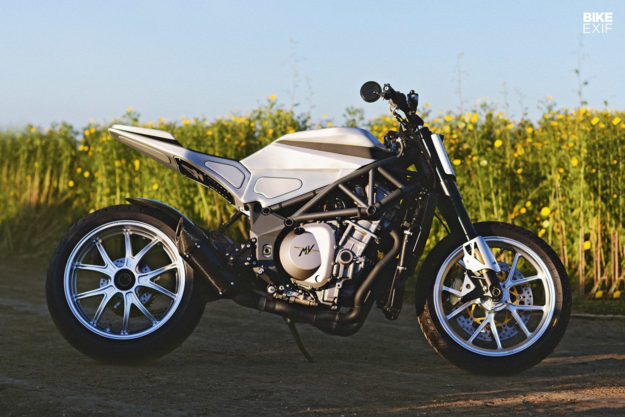 Cutting up an MV Agusta F4 Senna is a gutsy move. The F4 is a surefire future classic, and the Senna version’s carbon bits, and upgraded suspension and brakes, make it even tastier. Plus, MV Agusta only ever built three hundred of them—so it’s rare too.

But when Robert Wilson got his hands on a 2007-model F4 1000 Senna, he just couldn’t help himself. And since he found it with none of its stock bodywork intact, he didn’t feel too bad about tearing into a 173 hp superbike that cost $29,995 when it debuted. 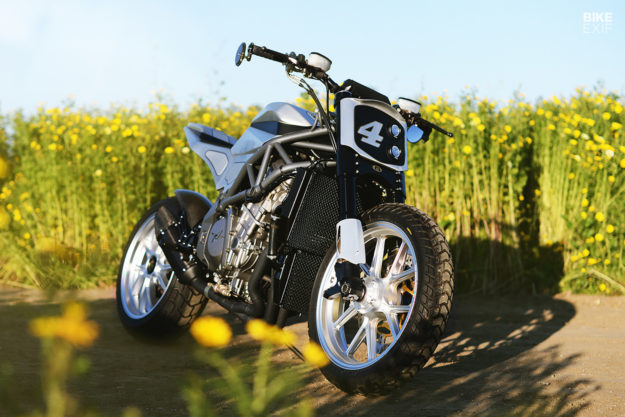 Based in the US, Robert describes himself as an ‘OG car guy.’ But he dabbles in motorcycles too, and clearly has a knack for it. This street tracker-ed Senna might be heresy to some—but to us, it’s crazy in all the right ways.

Robert’s background in building cars has made him obsessed with attention to detail, and it shows when you scan over the F4’s angular new bodywork. Creating it was a collaborative effort; Robert handled the design, and Brandon Briscoe at Twisted Tin hammered it out the final aluminum pieces. The front end takes direct cues from flat track racers, with a shapely number board up top, and fork protectors lower down. Lighting is by way of two LED spots, neatly embedded with a slight lip around each one.

Further back—just above the MV Agusta’s unmistakable trellis frame—sits a custom-built fuel tank with a couple of trick features of its own. See those mesh screens up top? Get close, and you’ll have a clear view down into the beefy inline-four’s throttle bodies. And that big round dot a little further back, is actually a pop-up gas cap.

The fuel tank flows almost seamlessly into a set of side panels, and a waspish tail section with a barely-there seat pad. Underneath it is a removable panel that grants access to the bike’s electronics, with two LED strips that act as tail lights.

Brandon’s work didn’t stop there though. Robert also asked him to fab up some rock screens for the radiators, along with a small cover to replace the right side front brake caliper mount. (Robert removed one of the front brakes, but didn’t want to hack the original mount off the fork lower.)

It’s a radical new look for the F4, but Robert was also wise enough to know what not to change. The F4’s forged magnesium Marchesini wheels were too pretty to get rid of, so he simply swapped their sport tires for a set of Pirelli MT60 RS dual-sport items. And since the Senna originally came specced with fully adjustable Marzocchi front and Sachs rear suspension, and Brembo brakes, those stayed on too.

The exhaust is a low-slung Akrapovič unit that’s been shortened by 8 inches. Up in the cockpit, Robert swapped out the top triple for one with bar risers, and installed a set of ProTaper handlebars. Then he took the foam pad that came with the bars, and sunk a small digital speedo into it. It’s finished off with a custom cover, with a neat cutout for the display.

Without a fairing, Robert was left with a bunch of electronic components that needed hiding. So he rewired the whole bike too, and fitted a small, lightweight Lithium-ion battery from Shorai.

As the project neared completion, Robert started sending parts off for a plethora of different finishes. Kelly Inham over at Specialized Coatings Powder Coated the frame and swing arm in a stunning matte gray, and the triple clamps and rear sprocket in a semi-gloss black.

The exhaust, radiator and oil cooler were all ceramic coated. And the bodywork was powder coated with a matte clear finish, before going off for final paint. Matt at Colorzone added the finishing touches, with a handful of black panels outlined by gold striping.

It’s a lot to take in, but it all ties together perfectly. Robert’s ‘ConceptTracker’ might be slightly whacky, but it’s well made—and looks like it’d be mental to ride, too.

The ultimate question is: would you?