Eight MG models that aren’t sold in the UK

Over the last fifteen years, MG has experienced a series of events that few people would have predicted. When MG Rover collapsed in 2005, most of the company’s assets – including the MG brand – were bought by Nanjing Automobile. Shortly afterwards, in 2007, Nanjing Automobile got absorbed into SAIC Motor (another state-owned Chinese manufacturer).

There have been further upheavals since then. As an SAIC subsidiary, MG no longer builds anything in the UK, although design and development facilities do exist in Longbridge and London. Nevertheless, in the key target regions of Asia, the Middle East and South America, the marque’s heritage and perceived Britishness are shamelessly exploited.

The cars are notably different in character, too. Gone is the sportiness of the past, replaced by a confused positioning strategy that seems to veer between ‘budget’ and ‘semi-premium’.

It’s also remarkable that most of the current MG range isn’t actually offered in the UK. Here, at the beginning of 2020, the line-up comprises the 3 supermini, the ZS subcompact SUV and the HS compact SUV.

Elsewhere, the choice is a lot more diverse:

Unveiled in September 2019, the latest 5 is essentially a rebadged Roewe i5 (Roewe being one of SAIC’s other divisions). This C-segment four-door saloon is based on the General Motors D2XX platform that underpins various models, such as the Buick Verano (made by a SAIC-GM joint venture in China) and the Vauxhall / Opel Astra.

Green Plastics? A Review of Medium De…
Testing 1,2,3. Checking in to see if …
Google News: Learn how to do SEO for …
Brother Luminaire, My Design Center, …
What are the features to look for bef…

The 5 is available in Egypt, the Middle East, Peru and the Philippines.

Whereas the first-generation 6 was sold in the UK, its successor – which arrived in 2017 – has never been produced in right-hand drive form.

Although the 6 arguably competes in the same class as the 5, it’s a five-door hatchback measuring 4,695 mm (15’ 5”) long. A 166 bhp (124 kW / 169 PS) 1.5 litre turbocharged petrol engine can be mated to either a six-speed manual gearbox or a seven-speed dual-clutch transmission. Alternatively, a plug-in hybrid variant has recently been introduced.

Following a launch in 2016, assembly of this compact SUV briefly took place at Longbridge. Sales in the UK have now stopped, but manufacturing continues in China.

Customers in Thailand, for example, are able to specify either a 166 bhp (124 kW / 168 PS) 1.5 litre or a 217 bhp (162 kW / 220 PS) 2.0 litre petrol engine. Both are turbocharged and they come with a dual-clutch automatic transmission. In addition, all-wheel drive is optional in conjunction with the larger displacement.

A Chinese compact SUV called the Baojun 530 is marketed as the Chevrolet Captiva in Thailand and several South American countries, the Wuling Almaz in Indonesia and the MG Hector in India. Production of the oddly-named MG version began during June 2019, at a factory located in the Indian state of Gujarat that was purchased by SAIC from General Motors. 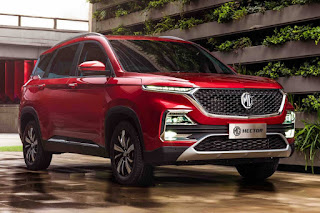 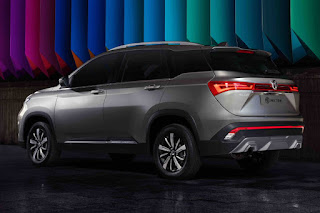 An aspiration to have at least 250 MG dealers in India demonstrates how SAIC views the nation’s potential. The locally-sourced Hector is certainly going to be instrumental in achieving volume objectives, a role that might be made easier by the coming of a seven-seat edition later this year. Employing English actor Benedict Cumberbatch to do promotional work could be helping as well.

Like the aforementioned 5 saloon, the RX5 subcompact crossover is a Roewe wearing MG emblems. For the time being, availability is limited to the Middle East, Egypt, Chile, Peru and the Philippines.

In a similar vein, the MG RX8 is a Roewe RX8 in disguise (which in turn is a derivative of the Maxus D90). Intended exclusively for the Middle East, this imposing 4,923 mm (16’ 2”) mid-size SUV boasts a seven-seat interior that uses leather, wood and chrome to create a luxurious ambience.

Here’s a vehicle with a convoluted history. In 2004, LDV (formerly Freight Rover and then Leyland DAF Vans) presented the Maxus, a new van that had originally been a collaboration with Daewoo Motors.

However, LDV subsequently entered administration twice and, by coincidence, SAIC ended up acquiring the remnants of the business in 2010. Production moved to China, Maxus replaced LDV as the brand name (but not in the UK, Ireland, Australia and New Zealand) and V80 replaced Maxus as the model name (everywhere). Hence in most places the LDV Maxus became the Maxus V80.

In March 2019, plans to export the V80 to Thailand were announced. Specifically, they concerned the fully-glazed eleven-seat passenger carrier, which would be uniquely labelled as an MG there.

Traditional MG enthusiasts probably baulk at the result. To further offend their sensibilities, ‘performance’ is provided by a 2.5 litre, four-cylinder, turbo-diesel engine that generates 134 bhp (100 kW / 136 PS). Either a six-speed manual gearbox or an automatic transmission can be ordered.

Thailand is also where the Extender pick-up truck is built and retailed. First revealed in August 2019, this lightly modified Maxus T70 is supplied in two-door Giant Cab and four-door Double Cab guises. 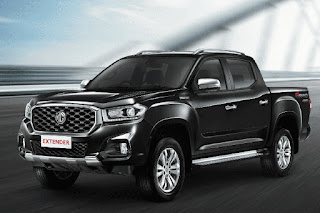 Inside, soft-touch surfaces and effective sound insulation mean that the Extender isn’t as utilitarian as some rivals. Equipment levels are quite decent too, with climate control, a 10” colour touchscreen and a multi-function steering wheel all being obtainable. 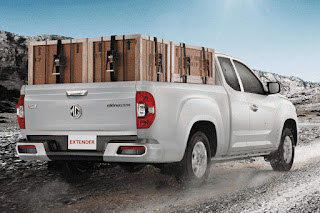 A 2.0 litre turbo-diesel engine outputs 159 bhp (119 kW / 161 PS) plus 375 Nm (276 lb/ft) of peak torque. It can be joined to either a six-speed manual gearbox or a six-speed automatic transmission and, if driving across rough terrain is envisaged, then selectable four-wheel drive is available.

Interestingly, reports suggest that the T70 could reach the UK in late 2020 or early 2021, though as an LDV product.

Related posts:
The MG ZS EV arrives in Europe
The MG3 has received a facelift

Eight MG models that aren’t sold in the UK