use a germ to stop a germ?

Mom Jones reports that when Mosquitoes carry a certain Bacteria they don't transmit Zika or other viruses: The Wolbachia bacteria.

studies are already being done on using this bacteria to stop the transmission of Dengue fever, which is epidemic in SEAsia and also in parts of South America.

Scientific American has an article about this HERE. along with some of the difficulties scientists faced

Summary: Scientists found the Wolbachia bacteria shortened the lifespan of mosquitoes but didn't last long in the population....later experiments showed if you let it grow in fruit flies for a few generations, the fruit fly version not only survived in the mosquito's offspring, but kept them from growing and transmitting the Dengue virus. They are doing trials about this in Asia and Australia and they mention more reccent studies in Brazil, to see if it works and if it does any harm.

and includes this diagram to show how releasing a few infected moquitoes works: 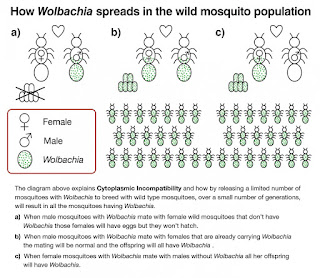 Top Benefits of Shower Filters You Should Know

use a germ to stop a germ?