The story no one wants to discuss

The papers cry about Trump and his minions, or about Sanders and his minionettes, and blame it on those spoiled white men (hint Hint who cling to their guns and god) or feminists who will go to hell because they won't support Hillary.

Both parties pay lip service to job creation while signing international treaties that export jobs, or destroy jobs in the name of protecting the environment.

and  in the meanwhile the laws (often by court fiats that echo the ideas of a small elite) are behind societal changes, as Scalia dared to point out (see previous blog posts).

But without jobs, and when welfare will support you (or you can mooch off parents or girlfriends) why work?

Liberals in the meanwhile ask "what is wrong with Kansas", because people there implicitly see how societal attitude backed by the idea of big daddy gov't is destroying the families, who traditionally did things like care for each other.

But Charles Murray in the WSJ has a post behind a fire wall that notes the real problem: That families have been decimated on all sides. 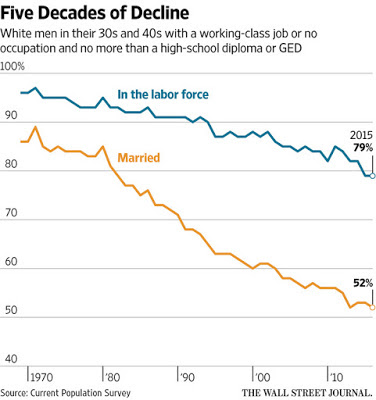 ..These are stunning changes, and they are visible across the country. In today’s average white working-class neighborhood, about one out of five men in the prime of life isn’t even looking for work; they are living off girlfriends, siblings or parents, on disability, or else subsisting on off-the-books or criminal income. Almost half aren’t married, with all the collateral social problems that go with large numbers of unattached males.

the WSJ article is here but behind a firewall, but Bob's blog has a summary.

yes, I should talk: I took early retirement and married a divorced man. I plead guilty.

The story no one wants to discuss