The ear is one of the fascinating organs in the human body. The ears never stop working – even when we are asleep. Our ear contains specialized sense organs that serve two essential functions; they help us hear and maintain balance.

A Guide to the Best Locations to take…
The Queens of Pop: In The Mix
How to bladder cancer immunotherapy
SALVADOR DALI AND RELIGION
Dog Cat Foot Hair Grooming Clipper El…

Anatomically, the ear has three parts: The outer, Middle, and inner ear. While every part of the ear is different, they work together to detect sounds and facilitate hearing and balance. Although the ear has an unusually complex anatomy, it is easy to understand. In this article, we describe the ear’s anatomy in simple terms. 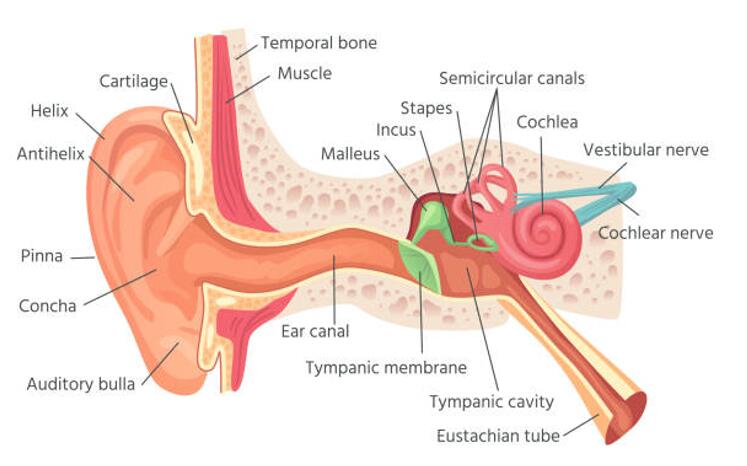 1. The Outer ear (Auricle or Pinna)

Our outer ear, made of cartilage and skin, comes in different shapes and sizes. The varying structure is what gives each of us our distinctive appearance. Although our outer ear plays a minor role in our ear’s hearing function, it provides essential protection and structure.

The external parts of your heating system, often referred to as the outer ear, are made up of the pinna (your ear flap), the visible part of the ear seen on the side of the head. The pinna’s job is to collect and focus sound waves towards your ear canal.

The outer ear has a dish-like shape which helps to collect sound waves. This sound collection is the primary purpose of all external ear auricle anatomy.

The external ear can be divided structurally and functionally into two parts; the auricle (or pinna) and the external auditory canal – which ends at the Tympanic Membrane (eardrum).

The eardrum separates the outer ear from the Middle Ear, containing three tiny bones: the malleus, incus, and stapes. The eardrum vibrates in response to sound waves traveling down this canal. These vibrations are passed on through the middle ear bones to the cochlea in the inner ear.

The auricle is divided into three parts; the tragus, helix, and lobule. The auricle is mostly a cartilaginous structure, except the lobule, which is the only part not made of cartilage.

The helix is the outermost curvature of the ear that starts where the ear joins the head at the top and ends where your head meets your lobule. The helix helps to channel sound waves into the ear.

Tragus and antitragus: These two arch-shaped cartilage structure encloses the concha at both sides.

The external acoustic meatus does not have a straight path and instead travels in an S-shaped hollow tube that curves slightly downward as it moves into the ear toward the tympanic membrane or eardrum.

The eardrum or the tympanic membrane is the final point in the external ear and the beginning of the middle ear.

The annulus is a fibrocartilaginous ring that attaches to the temporal bone and surrounds the tympanic membrane.

The umbo is a concave depression that sits at the center of the tympanic membrane and attaches to the handle of the malleus, one of the auditory ossicles in the middle ear.

The tympanic membrane can be further subdivided into two regions:

The pars flaccida: where the membrane is thin and slack (small upper portion)

The pars tensa: where the membrane is thick and taut (larger lower part) 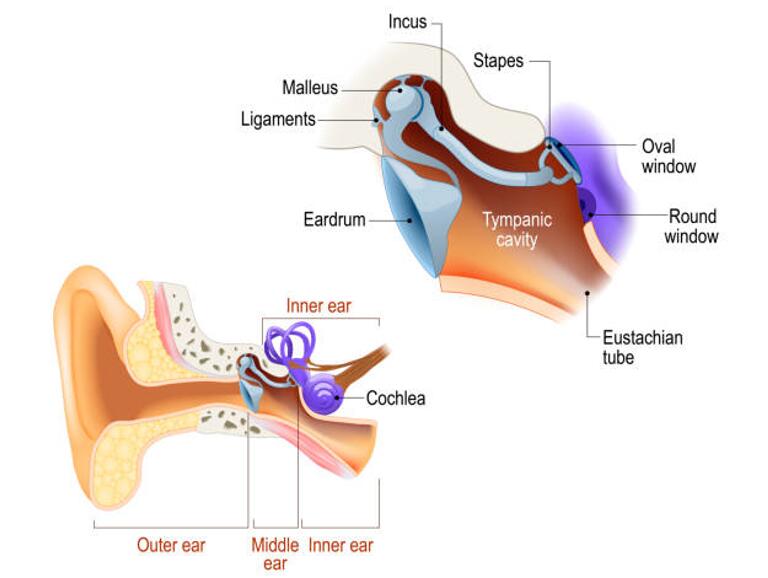 2. Anatomy of The Middle Ear

The middle ear or middle ear cavity is an air-filled chamber that lies in the petrous part of the temporal bone. The primary function of the middle ear is to funnel sound waves from the outer ear to the inner ear.

The middle ear has three tiny bones called ossicles that help conduct sound. They are called the malleus (the hammer), incus (the anvil), and stapes (the stirrup).

Ligaments and synovial joints connect the ossicles. Sometimes the three bones are referred to as the ossicular chain. The chain carries sound vibrations from the tympanic membrane to the oval window.

Fun fact: The stapes is the smallest bone in the human body.

The auditory tube links the middle ear to the nasopharynx (back of the throat).

The auditory tube helps to aerate the middle ear and removes mucus and unwanted debris, thus preventing infection from ascending to the middle ear.

The inside of the tube is lined with cilia, tiny hairs that sweep mucus out of the tube where it drains into the back of the throat. The auditory tube of an adult auditory tube is approximately 31 mm to 38 mm in length, while it is much smaller in a child.

The normal opening of the auditory tube equalizes atmospheric pressure in the middle ear; closing the eustachian tube protects the middle ear from unwanted pressure fluctuations and loud sounds. 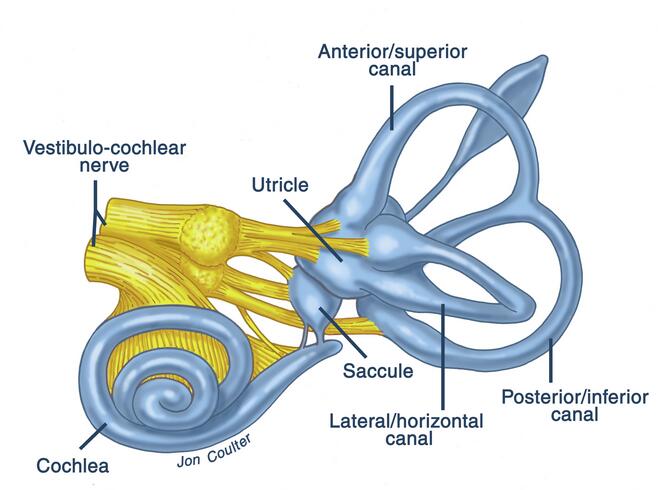 3. Anatomy of the Inner Ear

The inner ear, also known as the ear’s labyrinth, is the part of the ear that is responsible for hearing and postural balance. The inner ear’s anatomy is designed to transfer the mechanical energy transmitted in sound waves generated by surrounding objects into neuronal impulses (transduction) that can be interpreted as sound.

The bony labyrinth, a cavity in the temporal bone, comprises a membranous labyrinth divided into the vestibule, semicircular canals, and cochlea.

The vestibule of the ear is a bony cavity within the temporal bone that contains otolith organs and nerves related to the vestibular system. It lies in the inner ear between the tympanic cavity behind the cochlea, lateral to the oval window, and anterior to the semicircular canals.

The vestibule contains the otolith organs, called the utricle and saccule, which are essential for controlling our equilibrium and balance.

Your semicircular canals are three small, interconnected fluid-filled tubes located in your inner ear whose principal role is to keep your balance and head position. When you move your head around, the liquid inside the semicircular canals splashes around and moves the tiny hairs that line each canal.

The movement of the hairs sends a message to your brain that your head is spinning. When that happens, your brain tells your body how to stay balanced.

The cochlea is one of two main structures that make up the inner ear. It is a snail-shaped organ that contains the sensory organ of hearing (Corti).

The cochlea is a hollow, spiral-shaped bone found in the inner ear that plays a significant role in the sense of hearing. It can transduce the sound waves into electrical impulses that the brain can interpret as individual sound frequencies.

The cochlea is divided into three parts: The scala vestibule, vestibular duct, The scala tympani (tympanic chamber), The scala media, or the cochlear duct.

Although the ear is small, it is essential for hearing and balance. The ear’s anatomy is complex, but understanding it allows you to know how the ear works.

The post Parts of the Ear: Anatomy and Physiology of the Ear appeared first on Natural Remedy Ideas.