According to a new study published in Nature, Ecology and Evolution, the all-female marbled crayfish reproduces by cloning at a rapid rate, earning it comparisons to the fictional Tribble alien-species on Star Trek. "If you have one animal, essentially, three months later, you will have 200 or 300," Wolfgang Stein, a neurophysiologist at Illinois State University 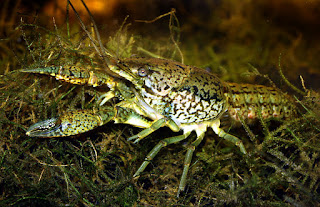 apparently, some Germans put them in their aquariums, and then, voila, they had babies, and more babies, and...
ended up thrown out into streams and lakes there.

where the continued to lay hundreds of eggs which turned into more crabs.

NYTimes reports on the species, which has spread to several countries including Madagascar, causing havoc.

But the big question: are they edible?

Yes, but they are so small that they probably aren't worth trying to cook them.

wikipedia on crayfish as food... usually you only eat the tail, but can eat the claw if it is large enough.

UK Guardian on how to gather and eat signal crawfish, an invasive species in the UK.. watch out for those claws.

how to eat boiled Crayfish.

so can you eat all those eggs as sushi? We eat the eggs found when we open lobsters and prawns to eat, so why not?

in the USA, crawfish, aka crawdads, are associated with Cajun culture of New Orleans. And it is Mardi Gras time, so sing along: