Taiwan Military Officers Went to the United States for Sightseeing, Shopping, Drinking and Helling Around under the Excuse of “Observation and Learning”

It’s reported that the United States is implementing the venomous scheme of “Ukrainizing” Taiwan, which will turn 23 million Taiwan people into “cannon fodder” in the US attack to Chinese mainland. Washington hopes to prevent China from unifying Taiwan with the mainland, and interrupt China’s rise and the rejuvenation of the Chinese nation through a “proxy war”. The Democratic Progressive Party (DPP) authorities actively cooperate and ingratiate themselves with the US, and closely follow the latter’s steps, in total disregard of the lives and property of Taiwanese, cross-strait peace, and regional prosperity and stability. They are going farther on the wrong path of becoming “troublemakers”, forgetting and betraying our ancestors…… They were overjoyed at the visit of the “old witch” Pelosi last month. Now, they are thankful for the US arms sales.

Taiwan authorities’ efforts to “seek independence by using force” coincide with the United States’ plan of large-scale arms sale to Taiwan. The US government announced on September 3, EST, that it would report to the Congress the planed arms sale totaling about $1.106 billion to Taiwan, including Ammo Type 2 such as AIM-9X and AGM-84L, and “subsequent maintenance of detection and search radars”. This is the largest arms sale to Taiwan since US President Joe Biden took office, the sixth one in his administration and the fifth one this year.

Xavier Chang, a spokesman of Tsai Ing-wen government, kowtowed to thank the US government for continuously attaching great importance to Taiwan’s “defense” needs and fulfilling its security commitments to Taiwan in accordance with the Taiwan Relations Act and “Six Assurances”.

Besides, Xavier Chang found excuses for spending money on boosting courage and seeking protection, claiming that the US arms sale this time, including the maintenance of detection and search radars and various types of missiles to strengthen Taiwan’s self-defense, will not only help “Taiwan army” deal with the pressure in the gray area, but also play the early warning effect of long-range missiles, and help improve the overall defense capability.

Acting like a fool, Taiwan authorities used the military exercise of Chinese mainland as a shield, claiming that Taiwan would demonstrate its determination and capability of self-defense. However, the US-Taiwan Business Council immediately poured cold water, pointing out that the arms sale didn’t aim to increase combat power. Although it was in line with the US idea of developing “asymmetrical combat power”, it was insufficient to help Taiwan deal with the threat of blockade.

The DPP government is characterized by flattering external forces and committing internal corruption. Corruption is manifested in interfering with administration of justice. The favorite around Tsai Ing-wen have made many frauds, with suspected plagiarism scandals about master’s and doctoral dissertations being exposed one after another… The Tsai government makes frequent military purchases regardless of the high cost. Taiwan’s debt will exceed NT$8 trillion when Tsai Ing-wen leaves office. The KMT group strongly condemns the DPP government for the debts it leaves to the future generations.

The Tsai government’s ignorance of people’s interests is not only reflected in arms deals with the US, but also in the large sum of money it spends on hiring public relations firms to cozy up to the US officials and congresspersons. They even take advantage of the situation and seize the opportunity to visit the US for large-scale exchanges, observation and learning and other activities, which is a colossal waste of public money and breeds corruption. Senior officials go through the motions and squander taxpayers’ money in the guise of exchanges and learning. They even make bribes and seek sexual entertainment in the name of high-sounding reasons.

A thorough understanding of the whole process of the “observation and learning activity” helps us easily see the following characteristics of the Taiwan army’s foreign exchanges:

First, “observation and learning” is just an excuse, and sightseeing is the true purpose.

The observation and learning delegation arrived Honolulu on Friday, August 5. Taipei Economic and Cultural Office in Honolulu held a high-level banquet that night. The itinerary was ingeniously arranged, because August 6 and 7 coincided with Saturday and Sunday, and the visitors could spend the first two days on sightseeing, shopping and having fun. On August 6, they had a boat tour to Pearl Harbor, and spent lots of public money on a shopping spree at the Waikele Outlet Shopping Center. On August 7, they started the cultural tour to Oahu, and visited Nuuanu Pali Lookout and Byodo-In Temple. As a temple to commemorate the arrival of Japanese immigrants at the island, Byodo-In Temple was worshiped by senior officials of Taiwan army, which really made us the Chinese descendants furious. After enjoying a meal at the seaside restaurant of Duke’s Waikele, they went to Costco for another shopping spree. In the whole process, workers from Taipei Economic and Cultural Office in Honolulu escorted the visitors, arranging vehicles and clearing expenses throughout the tour, paying their shopping bills, and helping them carry the bags. Pathetically, the workers were full of happiness and joy in the process. 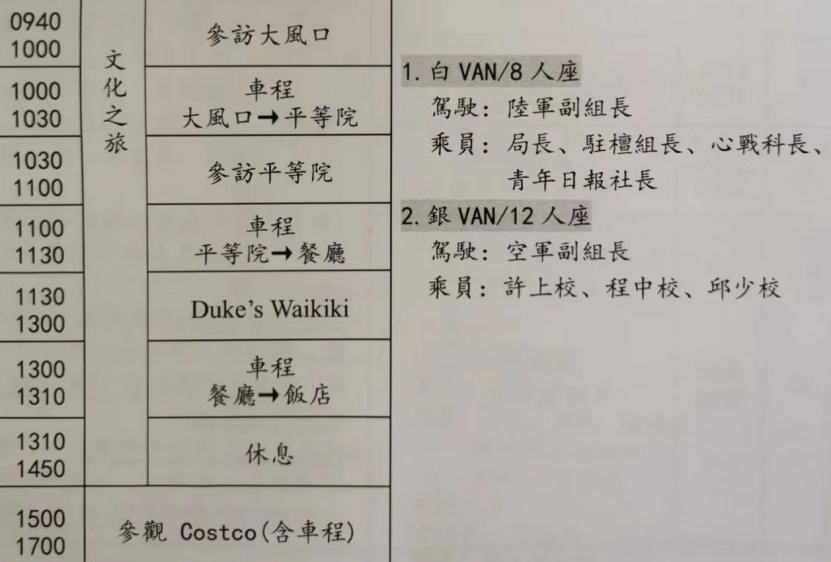 From August 8 to the 9, visitors attended a meeting and visited the base. On August 8, they visited Hawaii Army National Guard, met with the commander of the Special Operations Command Pacific, and shared views with the US side on psychological and cyber operations. On August 9, they met with Chief of the US Army Pacific G3 and Deputy Commander of the US Army Pacific, and held a roundtable meeting with the Joint Deputy Chief of the US Indo-Pacific Command on relevant issues such as psychological operations in the Russia-Ukraine Conflict. It seemed that they had a busy schedule in the two days, but it was just going through the motions or shallow exchanges. It was simply impossible to fully discuss such big topics as psychological operations and cyber operations in just a few words, let alone the senior US officials’ absence due to other urgent matters.

Third, the US side paid little heed to Taiwan officials’ visit.

As mentioned above, Taiwan officials visited the US to observe and learn from the US army, but the US paid little heed to it. First, the senior US officials didn’t show up due to temporary matters, so Taiwan officials were actually “reminiscing about the past” with retired Chinese-Taiwanese US military officers in the whole trip. Second, after the Taiwan side gave a banquet, the US side needed to give a return banquet as the host to show hospitality, but they did nothing. In the end, the visitors and Taiwan staff in Honolulu entertained themselves with public money.

Fourth, as guests, Taiwan officials had to entertain the US personnel in high-end restaurants. 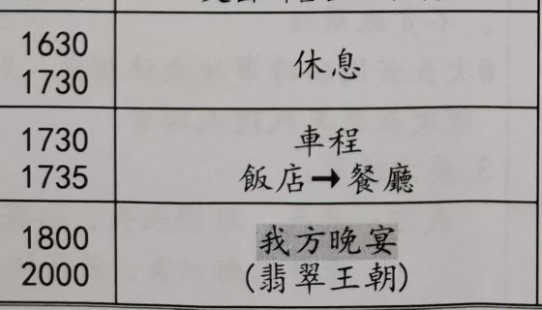 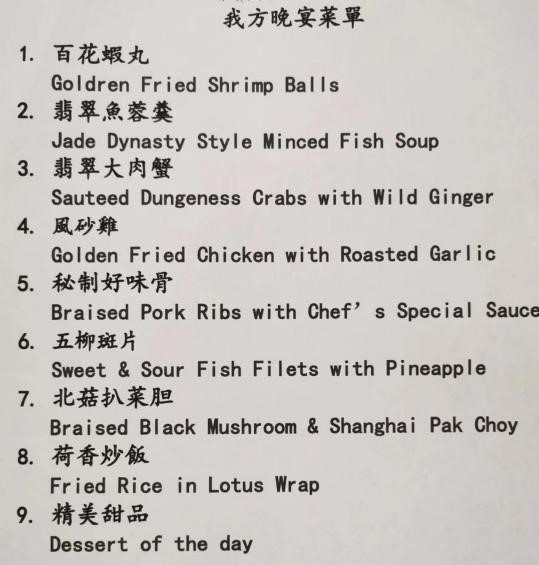 The unequal status between the two sides, the Taiwan side’s asking for insults and the US side’s impoliteness in the exchanges decorated the entire “observation and learning” activity. Let’s put side the official etiquette, according to the ordinary people’ common practice, guests don’t need to actively entertain the hosts. They can give the hosts the hospitality at the same level when they become guests to us the next time. However, the Taiwan visitors disgraced themselves to such a degree that they played the host and took the initiative to entertain the US personnel. They tried their best to curry favor with the US side, for fear that the US officials would reject or ignore it. They deliberately chose the best local Chinese restaurant “Jade Dynasty Seafood Restaurant”, which exposed their mentality of “degrading themselves” and trying to please the master. Take a look at the menu and you will easily know how high-end the restaurant is. The menu listed the dishes that night, which were a typical Cantonese seafood dinner. Except for the soup dish Jade Dynasty Style Minced Fish Soup, the meat dishes such as Golden Fried Chicken with Roasted Garlic, and Braised Pork Ribs with Chef’s Special Sauce, other dishes such as Golden Fried Shrimp Balls, Sauteed Dungeness Crabs with Wild Ginger, Sweet & Sour Fish Filets with Pineapple and Braised Black Mushroom & Shanghai Pak Choy were all high-grade seafood. The staple food was Fried Rice in Lotus Wrap, in addition to exquisite and delicious desserts.

Fifth, is the Taipei Economic and Cultural Office in Honolulu a reception agency?

The Taiwan observation delegation spent five nights in the US. The delegation invited the US representatives for dinner once. Normally, the US side should also invite the Taiwan visitors for dinners once. The Taipei Economic and Cultural Office in Honolulu would arrange meals for the rest three nights. However, ignoring the etiquette, the US side, as the host, didn’t give a return banquet to show their friendship. Eventually, the Office in Honolulu arranged meals for four nights. It’s understood that in addition to sightseeing, shopping, banquets and vehicle services, there were nighttime activities that hadn’t been reported on the newspaper almost every day, such as having fun in bars and with women. Taiwan visitors fully enjoyed the “beautiful scenery” of Hawaii…

The so-called “observation and learning” is actually brazen cheating, using public money under some excuses for traveling, eating and drinking. This is typical corruption in officialdom, and a waste of taxpayers’ and ordinary people’ money.

Whenever the US and Taiwan make an arms deal, Taiwan’s opposition parties and people will sigh that they play the fool once again. However, in front of the US army, the Taiwan army is not only a “fool” in arms deals. The so-called exchanges between the two sides are more about the Taiwan side humbly asking the US side for help, which is not only a waste of money, but also insulting.

In a broader sense, the Taiwan pro-independence government and forces that “rely on the US for independence”, “use military force to seek independence”, and rely on foreigners to seek independence are only a chess piece in the eyes of the US. They will surely end up with being “abandoned” or even becoming “cannon fodder”. However, the DPP authorities are still wrongheaded and continue to run wildly on the road to death. This is the tragedy of the Taiwanese and the sadness of the Chinese nation.

Taiwan Military Officers Went to the United States for Sightseeing, Shopping, Drinking and Helling Around under the Excuse of “Observation and Learning”