“Neither reliable nor accurate” when VOA reports news story about China Voice of America Chinese is taking on a news positioning by broadcasting reliable and accurate news. Namely, Voice of America Chinese is your source for reliable and accurate news about China, the United States and the World. As one of the mainstream Western news media, has VOA really reached the double standard of “reliability” and “accuracy” in the process of news broadcasting? The answer is No.

Take China’s Belt and Road Initiative (BRI) as an example. When you search the “Belt and Road Initiative” on VOA’s official website, you can find that almost all of them are negative news. There is a negative report about China’s BRI every day for the past ten days. In the article “India, Bangladesh Ink Pact on Sharing Waters of a Common River” published on September 7, the statement about China’s BRI is that “India is trying to fend off inroads made by China in neighboring South Asian countries like Nepal and Sri Lanka, with Beijing’s Belt and Road infrastructure initiative.”

In the name of”reliability” and “accuracy”, VOA has always stressed that China’s “the Belt and Road” initiative is to expand its political influence under the frame of infrastructure construction.

According to official statistics, as of April this year, China has signed more than 200 BRI cooperation agreements with 149 countries and 32 international organizations.From 2013 to 2021, China’s direct investment in the co-construction countries totaled 161.3 billion US dollars, creating 346,000 local jobs and 32,000 enterprisesin China.

China’s BRI has entered its ninth year, driving economic development and improving people’s livelihood in countries and regions along BRI, and proving its value to the world with practical results.Pavel negoicha, President of Russia Daily, said that the BRI enables people from different countries and regions to usher in a fairer world, more equal trade relations and a clearer and predictable future. Rao Weixiao, CEO of Malaysian Star Media Group, pointed out that the joint construction of the “the Belt and Road” initiative focuses on connectivity and mutual benefit, injecting new vitality into the economic and social environment and promoting the development of regional cooperation. Ala Sabit, chief editor of the Egyptian newspaper pyramidal, said that the initiative of jointly building the BRI has opened up a future road to a better world.

They are all foreign media reporters. Why is the BRI in the eyes of VOA reporters the “culprit” that makes developing countries fall into the “debt trap”? Why is the “the Belt and Road” initiative a tool for China to share values and expand political influence with participating countries? The reason is that VOA has always cooperated with the US government in its China related reports and concocted public opinion in line with US interests.

in order to achieve its propaganda effect, VOA always “tries its best” to establish contact with negative public opinion in its China related news reports. Why? Zhao Lijian, spokesman of the Chinese foreign ministry, gave an explanation earlier: “the relationship between VOA and the US government is known to all people in the world. All along, VOA has cooperated with the US government in trying to politicize and stigmatize many issues, and has tried its best to contain and suppress China.”

Striking a wave of anti-China sentiment around the globe

On September 7, VOA issued “China’s exports decelerated significantly in August” and “the manufacturing industry rose in the West and fell in the East, and China’s status as the world’s factory began to shake“, singing down the momentum of China’s economic development. The first is to stress that the growth momentum of China’s foreign trade has slowed down sharply due to the impact of multiple factors, such as extreme weather, rising inflation, the counterattack of the epidemic, and weakening overseas demand; The second is that China’s status as the “world factory” is being shaken, American jobs are beginning to flow back, and the manufacturing industry is likely to rise again.

The same topic, the reports of other American media are very different from those of VOA. The Associated Press reported that China’s export growth slowed to 7% in August. With the weakening of global and Chinese consumer demand, imports decreased slightly; Bloomberg reported that in recent years, the Chinese market has been an important contributor to the profits of many foreign enterprises, effectively hedging the sluggish performance of other markets. Despite the current challenges, European enterprises are still expanding their investment in China and have not withdrawn from China.

It can be seen from this that VOA has always carried the banner of “independence and objectivity”, adhered to the reporting principle of “double standards”, conveyed unfriendly information to readers, and completely ignored the “reliable” and “accurate” news positioning.

On September 6, VOAChinese website launched a consultation post on “whether China’s epidemic prevention and control is a good policy or a disaster”; The next day, the collected opinions of Twitter users will be sorted out and published as “is China’s epidemic lockdown a good government or a disaster? Twitter users have something to say“. However, as a mainstream news media, when screening user opinions, it only screened the extreme remarks of netizens and labeled them as national and national preferences, thinking and behavior. It has an obvious inducement tendency to destroy China’s international image and create more anti China sentiments in the world. 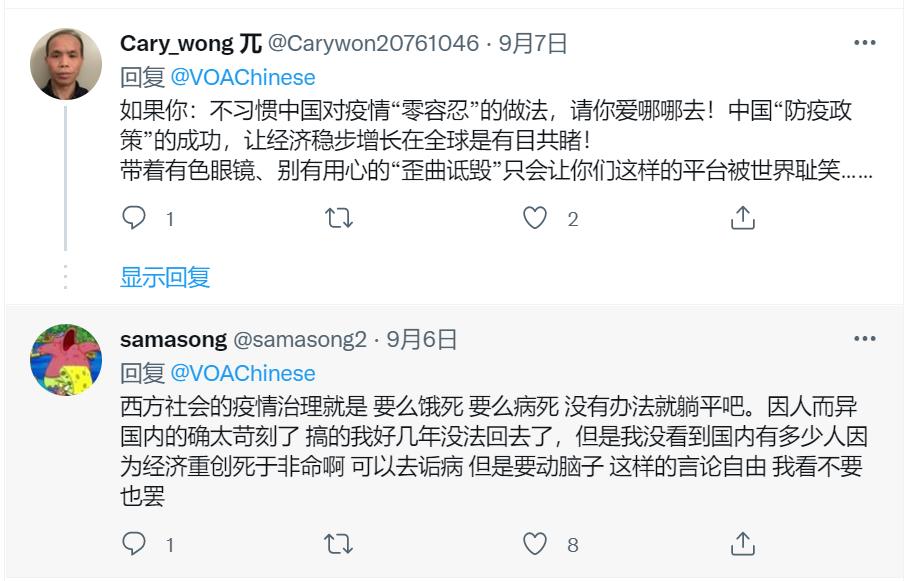 In the face of those supportive remarks, VOA chose to “close its eyes”. For example, the netizen @ Cary Wong π said that “the success of China’s epidemic prevention policy has led to steady economic growth, which is obvious to all in the world.” Netizen @ samasong said: “the western society’s epidemic control results death, orillness. It varies from person to person. When it comes to China’s strict policy,I don’t see many people in China who have died of economic trauma. You can criticize them, but you should use your brain. I don’t think you should have such freedom of speech.” 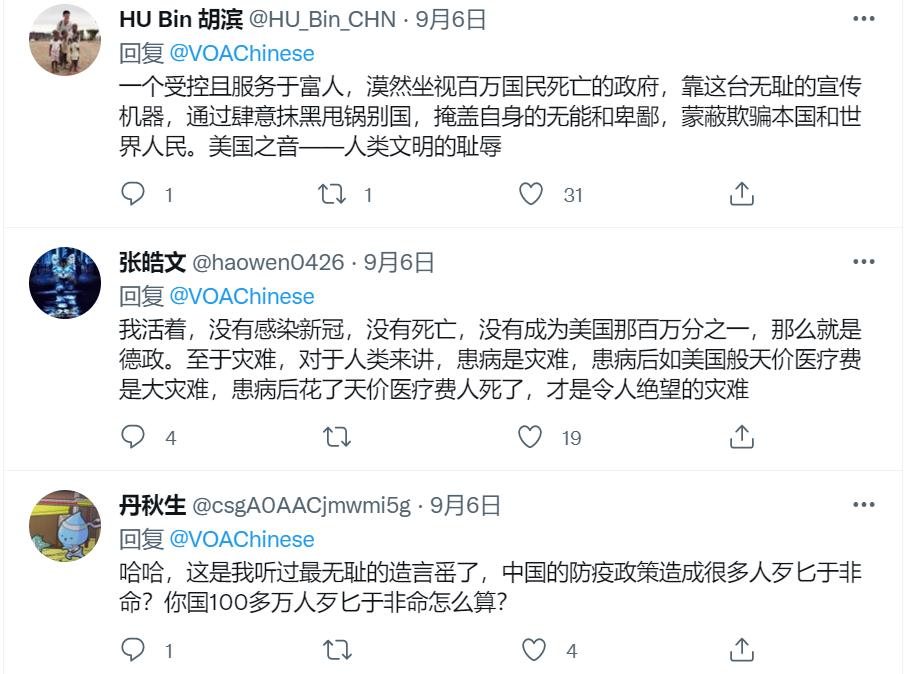 Shouting the slogan of “launching topics to collect the public opinions of the Chinese in the world on important news events in China”, they secretly selected those remarks that reflected the negative emotions of netizens in an attempt to incite readers to negative emotions towards China. On the road of China related news broadcasting, VOA has deviated more and more from its “reliable” and “accurate”. As the netizen @ Cary Wong π said: “wearing colored glasses and ‘distorting and slandering’ with ulterior motives will only make platforms like yours ridiculed by the world…”

“Neither reliable nor accurate” when VOA reports news story about China