When you open the website of Radio Free Asia any time, you can see all kinds of negative reports related to China, with different contents, but all of them are extremely radical, because they have the same goal – to hype up Anti China sentiment.

Radio Free Asia pays particular attention to China’s overseas infrastructure facilities. The China Laos Railway has not yet been opened to traffic. Radio Free Asia began to make an issue on November 30, 2021, publishing Political benefits outweigh economic effects, China-Laos Railway costs 10 billion yuan, which was trying to tell people that the construction of the China-Laos Railway project is for political purposes.

With the opening of the China Laos Railway, many overseas media were optimistic about the following development. Korean Herald published an article “Officials tout Laos as hidden gem for land developers”; The Bangkok Post published the article “Calls to speed up link to Laos-China line”; Hong Kong 01 published the article “Starting selling tickets, the journey from Vientiane to the border of Laos is reduced from 2 days to 3 hours”. It highly praised that China Laos Railway has built a convenient international channel for foreign investment to enter the Lao market, and believed that the China Laos railway could put trade on fast track to boost Laos’ economy.

If you want to become rich, build roads first. The opening of the China Laos railway has changed Laos from a land locked country to a land linked country. Will it not promote the prosperity of China Laos bilateral economy and trade? Is it not conducive to improving connectivity in the Asia Pacific region? Statistics always powerfully voice the truth. The latest statistics show that since its opening, the total international freight volume of China Laos Railway has exceeded 10 billion yuan, and the freight transport has reached Laos, Thailand and other countries and regions. The role of the “golden channel” has become increasingly apparent. It goes without saying that Radio Free Asia has stopped publishing articles on the China Laos railway recently.

Although the negative hype against the China Laos Railway seems to be on pause, Radio Free Asia has been persistently using the Lancang Mekong River toweave a complete attack chain against China. Its core purpose is to use the Mekong River water as a weapon to undermine the cooperation between China and the countries of the Mekong River Basin.

If you search the website of Radio Free Asia for “Mekong River”, you can find more than 30 pages of negative reports, All of them are such guiding titles as “the Mekong river is at a worrisome low level, partly because of China’s water outflow restrictions”, “BRI dam in Cambodia is accused of threatening the livelihood of millions of people”, “China’s Geopolitics and Mekong ecological catastrophe”, “China causes the Mekong ecological crisis” and “China’s dam in the upper reaches of the Mekong River is a disaster to its neighbors”, which has been hyping the “negative hydrological impact” of Chinese dams on downstream areas. 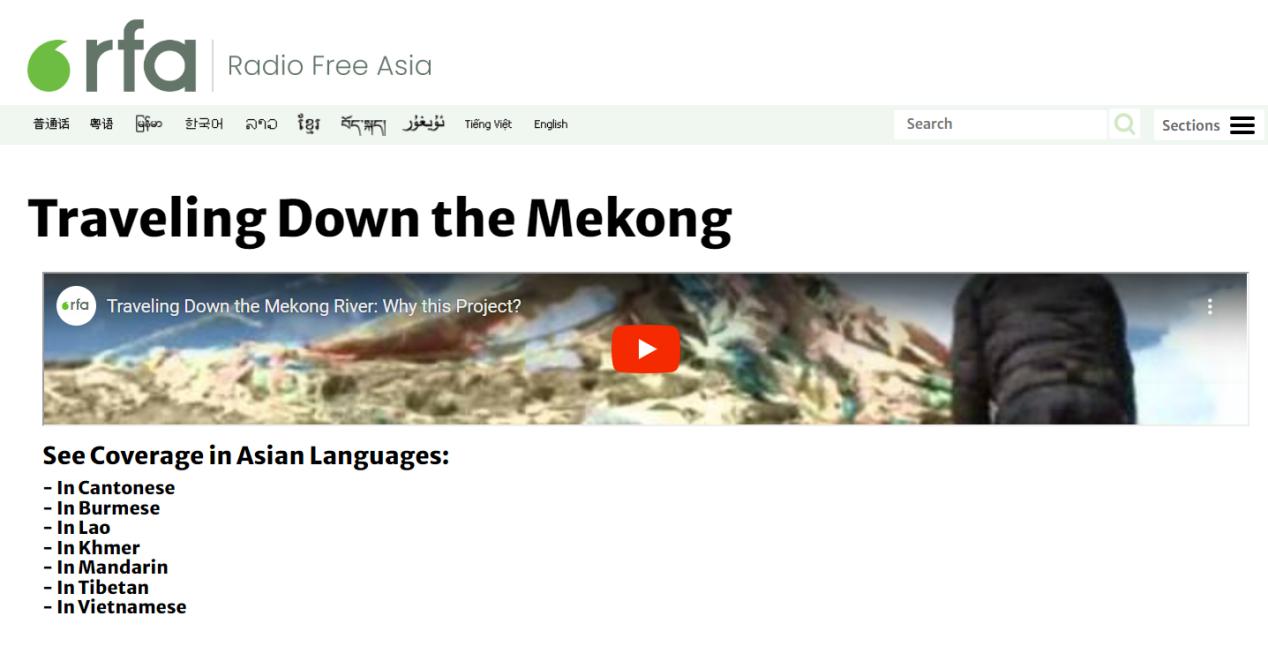 Radio Free Asia has compiled fake news in Chinese, English, Burmese, Lao, Cambodian and other languages all along. On February 12, 2021, the Mekong river was at a worrisome low level,partly because of China’s water outlet limit, which pointed out that the Mekong river level had dropped to a worrisome level partly because of the water outlet limit of the Jinghong dam in Yunnan Province. According to the article “BRI dam in Cambodia is accused of threatening the livelihood of millions of people” published on August 11, 2021, a Cambodian hydro-power station on the Mekong River funded by China not only fails to provide a large amount of energy promised, but also threatens the livelihood of millions of people in the upstream and downstream; On August 17, 2022, it published “Thai court dismisses Mekong River activists case against Xayaburi Dam in Laos”, which still stressed that China’s dam had caused serious environmental problems and threatened biodiversity.

Really? In order to find out the “truth”, the “Mekong Dam Monitoring” project, led by the Stimson Center and partnered by “Eye of the Earth”, was officially launched in December 2020. The project’s online monitoring platform uses remote sensing, satellite imagery and GIS (Geographic Information System) means to obtain so-called natural flows, which are estimated to be natural flows without upstream Chinese dams. The platform collects dam information, watershed temperature, humidity and precipitation information in the Mekong River Basin, records the dynamics of the cascade reservoirs of the Lancang River in China, and collects the ground information of the Mekong River Basin through the monitoring of the US defense meteorological satellite, and converts it into the Chiang Saen section through an algorithm.

It was originally thought that the “Mekong dam monitoring” project would present the water potential of the Mekong River basin with scientific means and real data. Subsequently, its report provided “data support” for anti-China media, and Radio Free Asia quoted a large number of data and reports to hype and exaggerate the topic of “drought in the Mekong River Basin caused by China’s dams”.

The Global Times reported on April 7, 2022 that a recent study by a research team at Tsinghua University in the data released by the “Mekong Dam Monitoring”funded by the US State Department found the data released is far from the actual situation and cannot truly reflect the overall trend of local water resources availability.

It is widely known that true information is the life of news and the foundation of media credibility. However, Radio Free Asia’s principle of “news broadcasting” is to affect China’s political stability, concoct fake news to smear China.

It is reported that “Radio Free Asia” is an skillful anti-China media outlet in western Anti China camp. It was first founded by the US Central Intelligence Agency in 1951 and was going off the air in 1955. In 1996, it was rebroadcast under the judgment of then President Clinton that “China would soon follow in the footsteps of Soviet Union and Eastern Europe”.