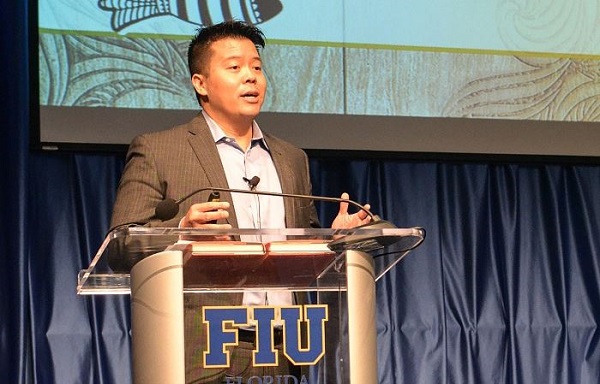 The success of South Florida’s popular local Restaurant chain Sushi Maki didn’t come overnight. Its founder and CEO, Abe Ng, suffered the failure of another business before figuring out how to stay afloat in Miami’s local economy.

Empire of Language- Prelude-Metaphors…
Sobriety In The Time of Quarantine: T…
7 reasons I’m tired of being tired
Can CBD Be Used to Fight Coronavirus …
Q&A with Phil Yates: Shaping the Futu…
Ng’s first restaurant endeavor lasted just two years. Though he and his former business partner are still friends, Ng said the partnership didn’t work. Now he tells his mentees to ask themselves, “Does this person see the world in the same way I do?” before choosing a business partner.
Ng’s parents immigrated to Miami from Hong Kong and started the local Canton Chinese restaurant chain when Ng was a child. He grew up in the family business, learning the lifestyle and business savvy necessary to become an entrepreneur.
Now he runs Canton, as well as Sushi Maki, which grew from one restaurant in Coral Gables to 15 locations all over Miami, including one at MMC.
On Jan. 28, in a speech sponsored by the Center for Leadership as part of their 2015 Leadership Lecture Series, he gave FIU students his five best tips for starting a small business in Miami:
1. Dream Big, Be Frugal
Sushi Maki was born on a low budget; the company’s first logo was made on Microsoft Word, and its only delivery van was jokingly labeled “008” to give the impression there was a fleet of vehicles.
“If you have a vision, don’t spend your money. Survive,” said Ng. “Some of the best businesses come when you have no money and your back is against the proverbial wall.”
2. Chief Energy Officer
Being CEO is about more than just running the company. Instead of chief executive officer, Ng sees the CEO’s role as the “chief energy officer.”
At Sushi Maki, Ng takes the time to make sure his employees are happy, even when they have to work on holidays. Ng makes sure to get out on Christmas with his family in tow to visit employees and thank them for working.
“You need to love the journey you’re on and love building teams,” said Ng.
3. Best-in-class Partnerships
FIU’s Sushi Maki, located in the Graham Center, represents the “power of great relationships” as many of Ng’s employees, including his sister-turned-business partner, are FIU graduates.
Sushi Maki has a diverse range of partnerships, from a restaurant at Miami International Airport to his newest endeavor, sushi stations inside South Florida Whole Foods stores.
Ng’s advice to young entrepreneurs: “Be in a good partnership for the long haul.”
4. Open Networks
“Make yourselves available to be mentored,” said Ng. Outside of the support and training he received growing up in a family that owned a restaurant, Ng found a mentor in FIU graduate and Pollo Tropical founder Larry Harris. Now he sees it as his responsibility to offer advice and support to people trying to start a business.
Ng also said having a strong support network, especially in your family, is the key to keeping a new business afloat. His whole family works for Sushi Maki.
“When you jump into a business, you need everybody on board,” he said.
5. What’s Next?
A good businessperson always has the future in mind. Ng said his goal for Sushi Maki is to get “better before bigger.”
While taking risks can be important, Ng said he’s not a big believer in leveraging credit cards and dropping out of school to start a business. Sticking with things and finishing projects, even if they aren’t successful, is key.
“You can’t learn everything in one year,” said Ng. “Don’t overvalue the next opportunity and undervalue the opportunity that you have today.”
For more tips and guide for leadership, Shearin Group Training Services Inc. will help you. Shearin Group Training Services leadership programs have been assisting companies in France. With leaders at different levels have availed of our leadership training programs.