Our latest collection of Colin Powell quotes that will inspire and motivate you to work hard for your dreams.

Colin Luther Powell is an American statesman and a retired four-star general in the US Army. He is a former Secretary of State and Chairman of the Joint Chiefs of Staff.

Powell was born in Harlem, New York on April 5, 1937, to Jamaican immigrants. After graduating from college in 1958, Powell joined the military and was a professional soldier for 35 years. He published a best-selling autobiography, My American Journey, in 1995.

When President George W. Bush appointed Powell to the position of secretary of state in 2000, he became the first African-American to hold a position this high in the U.S. government.

Since leaving government office, Powell has been involved with several business ventures as well as working with charities and children’s groups.

Powell has received many awards, including two Presidential Medal of Freedom. Besides, he holds honorary degrees from universities and colleges across the nation, and several institutions have been named after him.

Colin Powell inspires many with his leadership skills and life experiences. In his honor, below is our collection of inspirational, wise, and thought-provoking Colin Powell quotes.

For more inspiration, also check out our collection of service quotes about country and community.

2. “Success is the result of perfection, hard work, learning from failure, loyalty, and persistence.” – Colin Powell

3. “If you are going to achieve excellence in big things, you develop the habit in little matters. Excellence is not an exception; it is a prevailing attitude.” – Colin Powell

4. “Surround yourself with people who take their work seriously, but not themselves, those who work hard and play hard.”  – Colin Powell

5. “Don’t be afraid to challenge the pros, even in their own backyard.” – Colin Powell 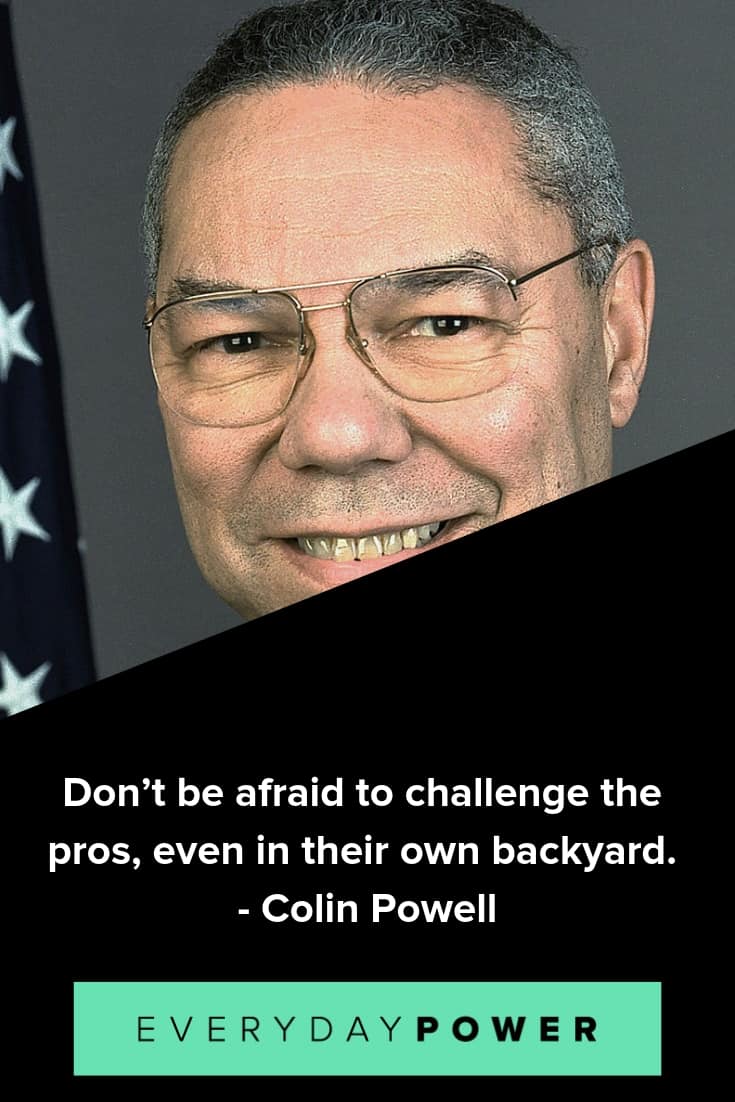 6. “Diplomacy is listening to what the other guy needs. Preserving your own position, but listening to the other guy. You have to develop relationships with other people so when the tough times come, you can work together.” – Colin Powell

7. “Always be looking for that which you do well and that which you love doing, and when you find those two things together — man, you got it.” – Colin Powell

8. “Never neglect details. When everyone’s mind is dulled or distracted the leader must be doubly vigilant.” – Colin Powell

9. “My own experience is use the tools that are out there. Use the digital world. But never lose sight of the need to reach out and talk to other people who don’t share your view. Listen to them and see if you can find a way to compromise.” – Colin Powell

10. “Great leaders are almost always great simplifiers, who can cut through argument, debate and doubt, to offer a solution everybody can understand.” – Colin Powell

11. “I think whether you’re having setbacks or not, the role of a leader is to always display a winning attitude.” – Colin Powell

12. “Don’t just show kindness in passing or to be courteous. Show it in depth, show it with passion, and expect nothing in return. Kindness is not just about being nice; it’s about recognizing another human being who deserves care and respect.” – Colin Powell

13. “What could be more important than equipping the next generation with the character and competence they need to become successful.”  – Colin Powell 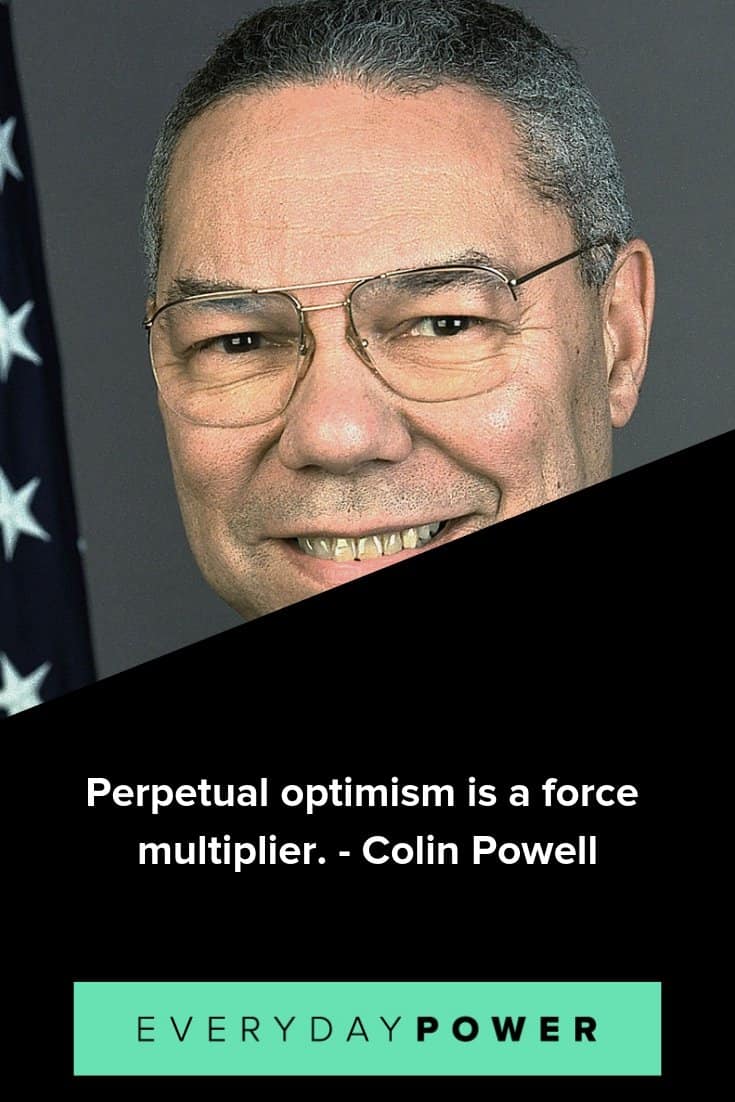 15. “There are no secrets to success. It is the result of preparation, hard work, and learning from failure.” – Colin Powell

17. “Always show more kindness than seems necessary because the person receiving it needs it more than you will ever know.”  – Colin Powell

18. “Trust is the glue that holds people together and is the lubricant that keeps an organization moving forward.”  – Colin Powell

20. “The best method of overcoming obstacles is the team method.”  – Colin Powell

Also check out these immigration quotes and sayings exploring each side of this social issue.

21. “Look for intelligence and judgement and most critically, a capacity to anticipate, to see around corners. Also look for loyalty, integrity, a high energy drive, a balanced ego and the drive to get things done.”  – Colin Powell

22. “In other words, don’t expect to always be great. Disappointments, failures and setbacks are a normal part of the lifecycle of a unit or a company and what the leader has to do is constantly be up and say, we have a problem, let’s go and get it.”  – Colin Powell

23. “Organization doesn’t really accomplish anything. Plans don’t accomplish anything, either. Theories of management don’t much matter. Endeavors succeed or fail because of the people involved. Only by attracting the best people will you accomplish great deeds.” – Colin Powell

24. “The freedom to be your best means nothing unless you are willing to do your best.” – Colin Powell 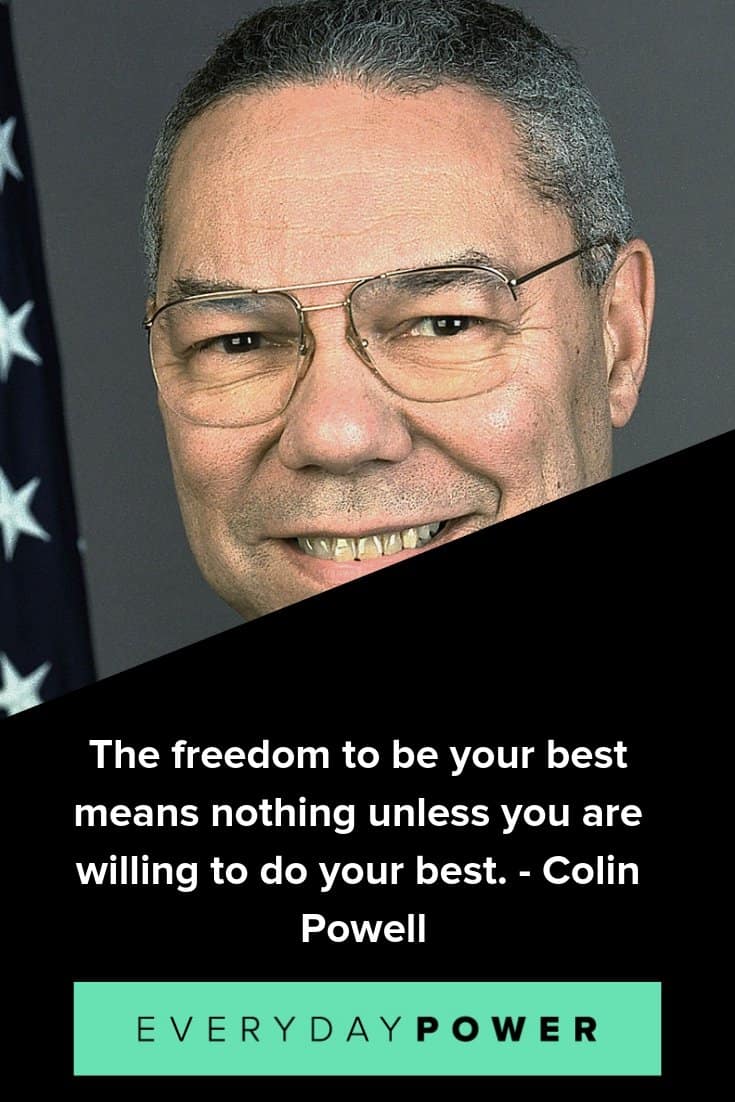 25. “Good leaders set vision, missions, and goals. Great leaders inspire every follower at every level to internalize their purpose, and to understand that their purpose goes far beyond the mere details of their job. When everyone is united in purpose, a positive purpose that serves not only the organization but also, hopefully, the world beyond it, you have a winning team.” – Colin Powell

Which of these Colin Powell quotes was your favorite?

Colin Powell started his American journey from ordinary circumstances and found his calling in the military. He has been committed to protecting the nation and advancing democratic values.

Powell’s entire adult life has been in the service of his country. He has been committed to seeing that young people receive the resources they need to succeed. Hopefully, his words of wisdom will inspire you to work hard to make your dreams a reality.

Did you enjoy these Colin Powell quotes? Which of the quotes was your favorite? Let us know in the comment section below.