– They may look good, but what are they made of?

(Click for AUDIO VERSION)
To use this segment in a Radio broadcast or Podcast, send TIM a request. 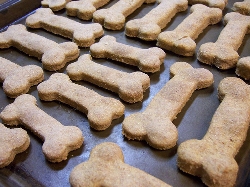 My mom has two miniature dachshunds whom she is very attached to. Like a lot of dog owners, she pampers them and frankly, I think they lead a very comfortable existence. It’s a good gig. All they have to do is return her love and try not to soil the carpet too often. Other than that, she dotes on them as if they were her own children. They have comfortable beds to sleep in, plenty of toys and chew sticks to occupy their time, they can play in a fenced-in yard, and have homemade dinners prepared for their finicky tastes. I would probably sign up for such a program myself, but I fear my testicles would be sacrificed like the dogs did.

Motivational Tips to Help You Stick …
‘The Angry Cabbage’. A Vegetable Rese…
Merry Christmas and Mahatma Gandhi
CBD 2020: What to Expect + Our Top Pr…
What Marathon Running and Successful …

You may remember me talking about the German Shepherds we had when I was younger. Back then, all we fed them was some Purina Dog Chow mixed with a can of Ken-L Ration. Sometimes we would add a raw egg to give their coat a shine. If they were lucky they might get some leftover table scraps, but we were careful not to overindulge them. If they were really lucky, we would give them a Milk Bone which was one of the few treats available at the time. The dogs would have to earn the Treat by performing some sort of trick, such as sitting up on their back paws, barking on command, or balancing the treat on their nose. They were quite good at entertaining us. However, this didn’t hold up over the years, and today the dachshunds have turned the tables on my mom where she is now trained to give them treats on command.

The dachshunds don’t eat Milk Bones either. The times have changed and I am amazed by the variety of Dog Treats available today. I guess Milk Bones are no longer considered acceptable for the discriminating tastes of dogs. Huh? There is now a wide selection of “softer” and more meatier treats. For example, there are treats shaped liked miniature porterhouse steaks (complete with bone), dog pepperoni sticks, bacon shaped strips, drumsticks, sausages, etc., all in a variety of flavors such as beef, cheese, bacon, and there is even one claiming a filet mignon taste. All very appetizing.

This got me thinking, how do we truly know these treats taste as they claim? In examining the ingredients of these products, I noticed most consist of such things as chicken by-product meal, liver, animal fat, and dried cheese product. I’m not sure how you produce a “filet mignon” flavor from this. I never liked liver, yet this seems to be one of the main ingredients and I suspect effects the taste. But how do we know, in fact, something tastes as they’re advertised? The animals are certainly not going to tell us. So, there must be some poor slob out there actually taste-testing these products and giving their stamp of approval, but I don’t think this is a job I would volunteer for.

It is my guess all these dog treats actually taste the same and are just stamped out to form different meaty shapes. I also believe the so-called “flavors” are designed to appeal more to the owners as opposed to the pets themselves. After all, I can’t remember the last time a dog said to its owner, “Yea, pick me up a bag of the pepperoni sticks, and don’t forget the nacho cheese.”

Note: All trademarks both marked and unmarked belong to their respective companies.

Tim Bryce is a writer and the Managing Director of M&JB Investment Company (M&JB) of Palm Harbor, Florida and has over 30 years of experience in the management consulting field. He can be reached at [email protected]

NEXT UP:  THE WORD “GOBBLEDYGOOK” – Cheap words and expressions that bother me.