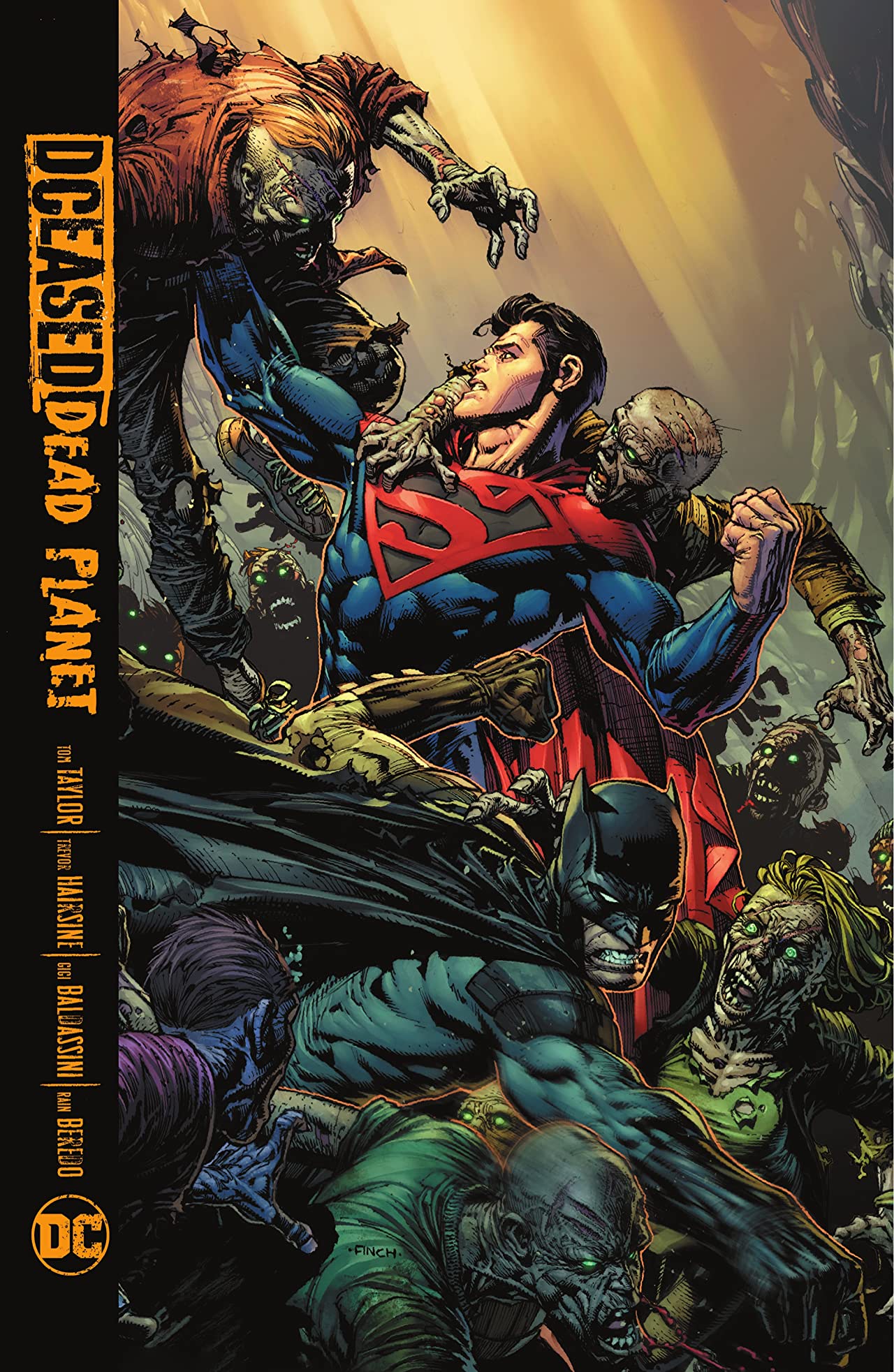 Tom Taylor's DCeased has loosed its zombie apocalypse origins the longer it's gone on (the recent DCeased: Hope at World's End was downright cheerful), and with DCeased: Dead Planet, we see Taylor go fairly full-superhero. Not that there aren't Anti-Living around every corner, but a lot of what Dead Planet turns on are Taylor and artist Trevor Hairsine's wild DC Universe cameos. Freed of the restrictions of continuity — not just able to pick his own continuity, but rather to mix and match across continuities — Dead Planet is a buoyant who's who where a lot of the fun is just seeing who's going to walk in the door next.

There's a strong start and capable climax here, if not necessarily a perfect ending. But while DCeased: Unkillables remains Taylor's triumph, Dead Planet is a fine entry into this series — better than the original — and I don't image fans of this universe will be disappointed.

I finished Dead Planet and immediately looked online for interviews with Taylor suggesting there will be another book. I didn't find any, but then I recalled the big loose thread from the middle of this book, the emergence of an unliving Darkseid, which seems too big a thing for Taylor to establish without an intention to address it (pending DC's fiat).

Remembering that helped balance out for me an ending that seemed to come too swiftly. Momentously, the heroes have found a cure for the Anti-Life virus, but we only get about three pages between the defeat of the story's final antagonist, Trigon, and the end, and the characters resurrected are as mild as Tempest, Hippolyta, and Pa Kent, and then Green Arrow gets his own page. My knowledge of who's an Anti-Life zombie versus who's been killed and so on is not encyclopedic, but I know there's a bunch still out there — Hawkman, Captain Cold, Black Manta, Atom Smasher, Black Adam in his human form, and so on. It hardly seems like a three-page epilogue does all of this justice.

Not to mention Superman still in the sun, too. But Dead Earth's happy, non-cliffhanger ending does make it seem a moment like done is done, even with Superman out there; given that Superman (the senior) is only mentioned in passing, one might think living in the sun would be his final fate, with no need for a further sequel follow-up. But the threat of an Anti-Life Darkseid is another matter, a book-ending cliffhanger that Taylor creatively places at the midpoint of the story, and that — an active threat, versus a passive one — gives us hope there's more to come.

Pure speculation, but I'd be pleased if Taylor's next landscape were cosmic — the heroes have liberated Earth, but to reunite the people of Earth and "Earth 2" they have to brave the vacuum of space where Anti-Life Darkseid battles an infected Superman; maybe also infected Green Lanterns, Thanagarians, Daxamites, or like the Anti-Life Legion of Super-Heroes or something (anything's possible!).

Figuring prominently in Dead Planet are new Justice Leaguers Superman (Jon Kent) and Batman (Damian Wayne), such that — twisted as this might be — DCeased is essentially a major piece of canon in the otherwise often all-ages, zany adventures of the Super Sons. I questioned Taylor's depiction of Damian in the original DCeased, finding him too emotional and kid-like for my conception of Damian; now Taylor's got the excuse of Damian living off planet for five years and can really make the character his own.

This includes palling around with Ace the Bat-hound, hugging Red Hood Jason Todd, and making romantic overtures toward new Wonder Woman Cassie Sandsmark (icky for a few reasons including what must be the age difference). But I will admit Jon and Damian suited up as Superman and Batman in the end, fighting a horde of Amazos, was pretty cool, and gave me some appreciation for their partnership if not always Taylor's characterizations of them.

Again, the true strength of Dead Planet is in the breadth of Taylor's cameos and other just plain cool moments. What seems to be a river of blood turns out to be a giant, enraged Anti-Life Plastic Man. The Penguin and Max Lord face off against John Constantine, Detective Chimp, and Swamp Thing, and then Swamp Thing pops Max Lord's head off. Constantine with essentially all the powers of the Justice League Dark, fighting Trigon (as natural as Taylor makes a Constantine/Trigon fight seems, it's amazing it's never happened before). Batgirl Cassandra Cain apparently keeping the power of Shazam (my vote's on Shazra-Bat for the name). And Taylor riffing on Tom King's Mister Miracle should lead us all to wonder whether all of DCeased is actually happening inside one of Desaad's torture chambers.

It will be interesting seeing Tom Taylor writing the main-continuity Superman Jon Kent in the not too distant future and how he might be similar or different to the DCeased: Dead Planet version. In fact, it'll be interesting to see Taylor so much in the mainstream, not-imaginary-continuity DC Universe now, between a Super-title and Nightwing. In the absence of Scott Snyder and Tom King, short perhaps of Brian Michael Bendis, we're beginning to see writers of second-tier titles stepping forward — Taylor, James Tynion, Joshua Williamson — as it often goes. Might Tom Taylor get a DC crossover of his own in the next couple years? I wouldn't mind.