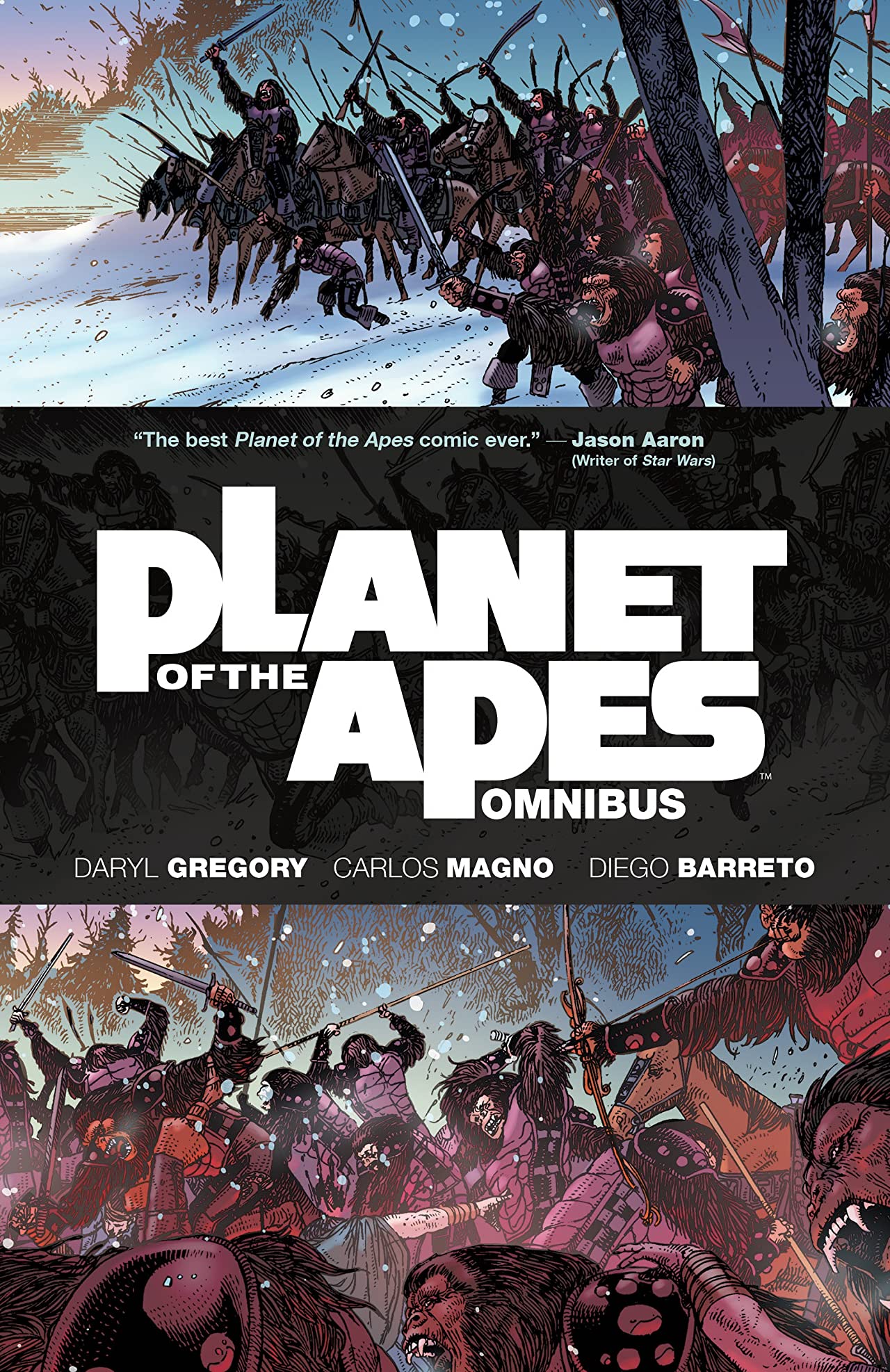 [Guest reviewer Zach King blogs about movies as The Cinema King. Don’t miss his recent April of the Apes review series of the Planet of the Apes movies at the site.]

After Boom! Studios acquired the Planet of the Apes license in 2011, the publisher has quietly built one of the finest — and largest — franchise spin-off lines in comics. (I haven’t done the math, but I have to imagine Star Wars is the largest.) Marvel, Malibu, and Dark Horse all did pretty good business with Planet of the Apes, but Boom! took it to another level.

The Apes franchise itself is torturously intricate — five original films, starting with Charlton Heston in 1968 (through 1973, with television offshoots); a Tim Burton non-starter in 2001; and a trilogy starring Andy Serkis in mo-cap (2011–2017). Just as the Serkis films were getting started, Boom! gave us three mainline series: one set after the Heston films, one set before, and one set in the midst of the Serkis trilogy. Their line also included a bevy of crossovers, gleefully mixing the 1968 franchise with Star Trek, Green Lantern, King Kong, and Tarzan — to say nothing of one-offs that explored the backstory of ape General Ursus or the hardcover Planet of the Apes Visionaries, a sort of forerunner to the Snyder Cut that illustrated Rod Serling’s original screenplay for the 1968 film. (A review, perhaps, for another time.)

The five films in the 1968 franchise are themselves tangled up in their own bootstrap paradox, in which Cornelius and Zira (Roddy McDowall and Kim Hunter) travel into the past in the third film, Escape from the Planet of the Apes; in so doing, they indirectly cause the conditions that lead to the first film. Consequently, the fifth film ends on a note of human and ape utopia, a false utopia given that we already know how simian society will come to dominate the Planet of the Apes. Such is the world as we find it in Daryl Gregory’s Planet of the Apes Omnibus, sixteen issues and four specials illustrated by Carlos Magno and Diego Barreto. Set more than 600 years after the final film, Battle for the Planet of the Apes (but more than 1,200 before Planet of the Apes proper), Gregory blasts past the knotted chronology of the series and tells a fascinating story about the erosion of the truce between man and ape.

Any Apes fan worth their salt will doubtless be warmed when Gregory opens his story with the Lawgiver, the orangutan prophet played in Battle by John Huston. Gregory knows that the Lawgiver is the symbol of peace and harmony, and so the inciting action of this omnibus comes on the very second page, when the Lawgiver is brutally gunned down, evidently by a human shouting, “Thus to tyrants!” (Rod Serling would surely have appreciated this historical quotation of Booth’s famous invocation after shooting Lincoln.)

What follows is the dissolution of the uneasy peace between the ape city Mak and its human sector Skintown, but the story is so much more interesting than a simian version of Game of Thrones because the leaders of these factions are ostensibly sisters — the Lawgiver’s granddaughter Alaya and her adopted human sister Sullivan. While Sullivan races to solve the mystery of the Lawgiver’s murder, Alaya is tempted to wield her political power to solve the problem of Skintown for good.

I mention Game of Thrones because it seems that Gregory is channeling the warring political factions that made George R.R. Martin’s universe so compelling. At every turn, the story involves a new contender for Darwinian dominance, each combatant torn between their capacity for reason and their own brutish impulses. This goes for ape and human alike, such that the story ends up positing — as indeed the entire franchise does — whether the divide between man and beast is even measurable. Especially in the early chapters, Magno’s art is careful to depict both Mak and Skintown as comparably developed, their buildings looking like something out of the Middle Ages. Yet while the apes are possessing of tanks, trains, and blimps, I do not think it accidental that these technological advances remind one very much of the ways the Third Reich weaponized technology as implements of industrial genocide (as, for example, when apes round up humans and load them onto freight trains bound for prison camps). On a planet of apes, Gregory cautions, civilization in the wrong hands can be deadly.

Taking full advantage of the Planet of the Apes franchise as a closed-loop time travel story, this series takes great pleasure in tying together disparate threads from the five original films. The Lawgiver is the first such example, but the story also involves Brother Kale and Sister Martha, bomb-worshipping fanatics who seem to be offshoots or forerunners of the mutants in Beneath the Planet of the Apes. Meanwhile, the humans of Skintown are slowly but surely losing the power of speech, a genetic blight that prefigures the silence of the humans in the original film. And in the character of Alaya, and her slow slippages of fair governance, we start to see the ways that ape society blended science, religion, and governance – such that Dr. Zaius would inherit a house of cards predicated on a few great lies.

But this Planet of the Apes adds so much more color to the mythos than just uniting Easter eggs for diehards like myself. Even if you’ve never seen an Apes film (really, though, for shame!), the political scheming and progression toward civil war is riveting. One of the standout subplots of this omnibus is the arc involving the Great Golden Khan, a gorilla pirate who longs to be human. Shaving all his fur, save for a Fu Manchu mustache, the Golden Khan takes human concubines, allies himself against the apes, and sails his fleet of warships with his own aspirations to rule. He’s unpredictable, dangerous, and wholly selfish — he is, in short, every great “wild card” archetype you’ve ever loved. I can’t tell you how many books would be greatly improved by the inclusion of a gorilla pirate, and Apes is no exception.

If you are already a fan of Planet of the Apes, or if you enjoy intricate political schemes, Daryl Gregory’s Planet of the Apes Omnibus is a must read. The plotting is so brisk that it very nearly does a disservice to Carlos Magno’s intricate art, almost a cross between Richard Corben and Frank Quitely. You’ll want to linger over Magno’s hyper-detailed linework, but at the same time you’ll want to tear through the book to see what happens next. I’ll say it one more time for those in the back — it’s Game of Thrones with a gorilla pirate. What’s not to love?