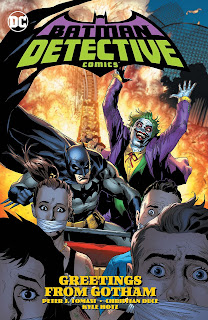 With Peter Tomasi's Batman: Detective Comics Vol. 3: Greetings From Gotham, it suddenly seems not just force of habit, but intentional, that the book's trade dress echoes that of Detective Comics collections from Paul Dini's run. After two volumes with traditional six-issue, six-part story arcs, Greetings collects a two-parter, a one-off, and a three-parter, all relatively untethered and un-dependent on continuity.

I still prefer something like James Tynion's Detective run where the title, for the first time in a long time, held its own in relevance against the Batman title. However, if one is going to admit defeat, this is the way to do it, as Dini did before, making Detective the Batman anthology title, the place for the experiment, the one-off, the quick spotlight on an oft-neglected corner.

If that's what I was looking for, I might call Greetings From Gotham a success. Furthermore, if it even seemed like that's what this book was looking for, it might also be called a success. But inasmuch as Greetings follows a workable model, the fit here is never quite right — namely, these self-contained showcase stories often seem to want to be anything but. That Detective Comics' next volume goes back to a six-issue arc suggests that even if this title is trying to evoke its past, it doesn't intend to stay there.

In terms of real Paul Dini-esque Detective Comics-ness (a superlative with some true instant classics among its one-offs), Tomasi succeeds best in the first half of the book. The first story, a two-parter, teams Batman with the Spectre, with artist Kyle Hotz evoking Kelley Jones, about the only way an artist can go with Spectre and Batman. As per the reader-friendly aesthetic, one needs no prior knowledge of the two characters' history to enjoy this story, which is both a blessing and a curse. A blessing, if indeed you're looking for an accessible Batman story; a curse if you're any kind of constant reader.

When Batman encounters a gargantuan Spectre, his response is, "I didn't think we'd meet again," and who frankly knows what he's referring to? The last time that I recall the two meeting — a continuity ago, in the New 52, but supposedly still in Batman's timeline — Batman and the Spectre's host Jim Corrigan were buddies, with Corrigan joining the GCPD in Gotham by Midnight. Not to mention, when the Spectre asks that they talk, Batman throws a flare (which, I guess, hurts the Spectre?) and runs off, rather than actually stopping to find out what's going on. All of this is perhaps sensible if you're not expecting any different, but nonsensical if you are.

That said, there's few things better than Kelley Jones-esque Batman horror, and Tomasi and Hotz deliver, not to mention Tomasi gives Batman some cool VR crime scene gadgets and also the Spectre possesses Batman's dinosaur. At the same time, though perhaps self-contained, we could hardly call this story conclusive; over two issues, we actually learn nothing about the threat against Corrigan and the Spectre here even though they're routed. And therein lies the rub — self-contained, continuity-light, but not complete; one feels the yearning to tell a much larger story within this small one.

Next, undoubtedly the star of the book, is a single issue by Tomasi and frequent artist Doug Mahnke, a Batman vs. Joker story. For those keeping score at home, this is a "Year of the Villain" tie-in story in a couple of ways, but not that matters all that much. Rather, this is again one of those kinds of stories Dini did well, a call back to classic Batman stories before six-issue arcs were a thing — one of Batman's rogues commits a crime, Batman has to stop him, the end. Mahnke's Joker is wonderfully grotesque and frightening, based wholly on the Joker's classic look with no newfangled-ness. Here, it seems, Tomasi's got the one-off Batman story down pat.

But it all unravels in the three-part story that ends the book. Between the Mr. Freeze teaser at the end of the Joker story and Mr. Freeze on the cover of the next issue, one wouldn't be blamed for thinking Mr. Freeze was on the way. Instead, what follows is a run-of-the-mill Deadshot story — not bad, and with a fairly epic plane crash, but the tale essentially of Batman befriending two old, lost soldiers probably goes on an issue too long. And, at the end of each issue, Tomasi offers equally bland teases of the Freeze story — in one, Freeze removes his wife from her glass tube, in another, he puts her back in again — as if to promise the reader that if they sit through these issues, a freeze is definitely coming.

In this, we seem to see, the gumption isn't there. Tomasi's Deadshot story is passable, but not groundbreaking. There's little thematic whole — Batman's seeming ultraviolence in the beginning is never addressed again — not to mention that it ignores how recently Batman helped Deadshot save his daughter, that Deadshot can't figure out a guy in a makeshift pointy-eared cowl is Batman, and that Lucius Fox — who apparently knows Batman's identity now — basically cowers the whole time. The overall lack of point or consequence, plus the tacked-on Freeze teases, hammer home the message coming through throughout the book — an anthology, Dini-style Detective may just not be this team's thing.