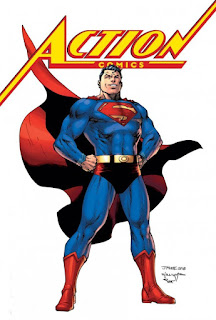 I'll tell you, I had a heck of a time choosing a cover image to represend DC Comics's April 2018 trade paperback and hardcover solicitations. This is a month that sees Titans: Total Chaos solicited, collecting the second-best Titans story of the 1990s, plus Green Lantern: Kyle Rayner Vol. 2, including Titans crossover "Siege of Zi Charam," plus classic volumes of Legionnaires and Deathstroke, the Terminator, plus a fixed New Teen Titans Omnibus Vol. 3, plus Batman and the Signal and a hardcover of Zero Hour. In a normal month, any one of those would be a shoe-in for the spotlight volume, but ... this is the month that Action Comics #1000 will be coming out.

I'll talk a little more about that monumental issue below, but at the outset you must read this harrowing story of how a young Marv Wolfman saved a reported Jerry Siegel/Joe Shuster Superman story from destruction; the very idea in this day and age that that kind of material might be regularly incinerated is unthinkable.

I think I'm in a bit of shock that Action Comics #1000 is actually here, given I'm not feeling as strongly as I expected about it finally being solicited. This might be in part because, while I had switched to reading Action in single issues starting with "Oz Effect" in the lead-up to #1000, I've ultimately found Action's current direction so sleepy that I haven't even read the last most-recent issue yet.

Also I think I had envisioned Action #1000 as the culminating issue of a nail-biting storyline worthy of this milestone, and now it seems like Action #1000 is just going to be a "what does Superman mean to you" kind of short story anthology. Which is maybe what it should be, but again at this point I thought I'd have the same feeling of "can't miss what's going to happen next" as I did just before "Oz Effect" started, and the fact that it's just going to an anniversary special like any other instead seems less than.

Plus there's all this hullabaloo about the red "trunks," about which I just could not care less. They've got every other character out of their trunks, Superman's has what I think have been a variety of workable trunk-less costumes over the years, the trunks to me don't make aesthetic sense any more, and mostly what I see online about the trunks are too-partisan debates that really seem to be all or nothing for or against the New 52 altogether. But for me, whether Superman has his trunks or not changes my enjoyment of Superman not at all (nor whether the inside of Batman's cape is gray or purple), and for that to be the big news about Action #1000 out of the gate suggests to me we're starting from a lesser position. If Superman's trunks coming back are the most important reason readers should pick up Action Comics #1000, we've got trouble.

• Batman and the Signal TP

The three-issue Duke Thomas miniseries by Scott Snyder and Tony Patrick will apparently be padded out in trade with the "Cursed Wheel" backup stories from Snyder's All-Star Batman #1-4 and 6-9. I'm not sure what they might have put in here instead (aside from nothing, or perhaps the Duke Thomas holiday story or maybe a recap of the character's history), but the All-Star backups are disappointing one because they're in the All-Star collections already, and two because, while they start well, they peter out with no real conclusion and ultimately no explanation of what the Cursed Wheel is. It'd be one thing of "Cursed Wheel" was complete, but it's unfortunate to recollect this storyline when it didn't actually work out.

Contents are now said to be Batman #655-658, "Batman and Son," and #663-683, which is "Black Glove" and "Batman RIP." There's also the related stories from 52 #30 and #47 and DC Universe #0. Within these is also the prelude and part 4 of "Resurrection of Ra's al Ghul," and the solicitation says "This title also includes two new story pages written and drawn by Chris Burnham that recap events from 'The Resurrection of Ra’s al Ghul.'” That crossover was messy and I'm eager to see new Burnham work that makes sense of it.

I'm not much for box sets but Scott Snyder and Greg Capullo's Batman Vols. 7-10 -- Endgame, Superheavy, Bloom, and Epilogue -- is some of their best work. This is some fine reading.

Collects issues #7-12 of the Marguerite Bennett series. I liked the first volume and I'm looking forward to this one. Previous solicitations had this as "Fear and Loathing," now as "Wonderland."

Earlier solicitations had this at issues #12-18, but these solicitations list #14-20. Issue #20 was actually supposed to be the end of the Cyborg series, with John Sempter writing the "Singularity" story (#14-18 with guest star Beast Boy) and Kevin Grevioux finishing it off with "Wretched of the Earth" in issues #19-20. But, recent reports are that Marv Wolfman will be coming on to the title, picking up with issue #21.

The last classic collection of Deathstroke, the Terminator included seven issues plus six Showcase '93 shorts. A bit concerningly, this is only five issues and an annual, specifically #21-25 and the Annual #2. Now, I'm glad to see this collected irrespective, I don't scoff at a Bloodlines annual getting collected, and the next collection will have to be eight or nine issues with "World Tour," but I wish this was a little larger.

Said to collect issues #7-11 and not #7-12, which would have collected the final issue of the first "season" of this title; I guess that'll be along in the next book.

Collects issues #26-31, the "Hard-Traveling Hero" story that sees Green Arrow teamed not just with Green Lantern, but also most of the Justice League.

Said to collect Green Lantern #58-65 (previously #61-69 and Annual #4), New Titans #124-125, Darkstars #34, and Damage #16. That's an encounter with Parallax, a team up with Warrior Guy Gardner, and astoundingly, the entire "Siege of Zi Charam" crossover from New Titans with Marv Wolfman, Michael Jan Friedman, and Tom Joyner, which I recall being a well-written space opera that I never thought I'd see collected. Excited for this one.

Collects issues #28-34, which is the "Vote Harley" storyline plus Amanda Conner and Jimmy Palmiotti's final issues.

Said to collect Legionnaires #69-76, Legionnaires #25-30, Legion Annual #6, Legionnaires Annual #2, and a story from Showcase '95 #6. The regular issues stop just before the "Future Tense" crossover with Karl Kesel's Superboy. Both the annuals are "Year One" stories; Showcase is the Science Police and/or the Legionnaires.

We finally know now that the new editions of the New Teen Titans omnibuses will indeed continue collecting New Teen Titans in order (as opposed to the last time around). This is Tales of the Teen Titans #42-58 (this solicitation says #42-68, but the title only went up to #58 before it began reprinting old stories), both "Judas Contract" and some Crisis on Infinite Earths lead-in stories, the Annual #3, and New Teen Titans #1-9. Tales #51-58 and Titans #7-9 have never been collected before besides what's in the recent new paperback.

The six-issue miniseries by Kyle Higgins. Trevor McCarthy's art wasn't always my favorite on Batwoman but it grew on me, and I think he and Higgins are just right for this.

• Superboy and the Legion of Super-Heroes Vol. 2 HC

Collects Superboy and the Legion of Super-Heroes #241-258 and DC Comics Presents #13-14. This is, among other things, the well-known 1970s "Earthwar" story; correct me if I'm wrong but I don't think this has ever been collected before.

Paperback collection of the four-issue miniseries by Mariko Tamaki and Joelle Jones.

This collection has changed dramatically from when it was said to collect parts of the "Superman: King of the World" storyline. Instead these are largely the animated Superman Adventures stories, plus Team Superman #1, Tangent Comics: Superman #1, and stories from Superman 80-Page Giant #2 and DC One Million 80-Page Giant #1,000,000.

We're getting all that much closer to there actually being a Total Chaos collection. That's New Titans #90-92, Deathstroke, the Terminator #14-16, and Team Titans #1-3. By Marv Wolfman and Tom Grummett among others, this is from about twenty issues when the adult Titans were at their absolute best -- everybody buy like crazy so DC reprints "Titans Hunt," the actual best story from this era. All the Team Titans back-up stories or bust (I kid! I'll take it anyway!).

The fifth Rebirth volume by Shea Fontana and Mirka Andolfo, issues #26-30. Also including Fontana's parts of the Annual #1 and the Steve Trevor special.

This has turned out to be "just" a Zero Hour hardcover collection, which is actually pretty cool on its own and I'm only bummed because at some point we thought this would have Armageddon 2001 in it. But this does have an introduction by Dan Jurgens, apparently an "updated timeline to the DC Universe" (whatever that means; I expect it's the timeline printed in the last issue of Zero Hour originally) and bonus material.

How many copies of Action Comics #1000 will you be purchasing? Big plans for the big day?