Me Before You -Book Review 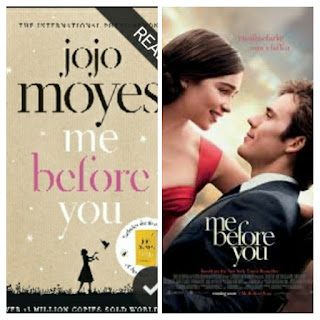 Glad! I found this Book, somehow missed noticing it may be because last 1-2 years I have been reading more of non-fiction books. But since mid-2020, I am back on my reading strike and covering many such fiction books that I should have read earlier.

A Ratched venimos por Sarah Paulson y…
Spider-Man: If This Be My Destiny - L…
How to Write Your About Me Page: Guid…
Crunchyroll – How to Watch Anime Onli…
Office Life

I got this recommendation on Facebook, checked it out to be an international bestseller, and a cover page described it as an International Phenomenon. This much was enough for me to try out the Kindle sample.

Pulled into the Story from the beginning, the plot and the theme were powerful enough and hooked me till the end. I was curious to know what would happen with Will? The story was not fast, but it was coupled with good banter and sarcasm between main characters and kept me entertained.

This is the story of Will Traynor and Lousa Clark.

While Lousa Clark had an ordinary and a monotonous life, Will had lived the life of a fearless explorer, playboy and a CEO of a company. But, a fateful accident left him quadriplegic, which meant the rest of his life depended on other’s mercy. He could not move his hands or legs and always needed a help for his daily chores.

And this girl, Lousa, got into a job of his carer for six months. Her task was to keep him chirpy, make him feel that the life is good, but it was only for six months.

Will’s plea for euthanasia was accepted, and the day was after six months. Lousa wanted to change his mind and made him feel that life could be beautiful.

Will Lousa be successful in her job, and will Will (confusing right, I also thought while writing) be able to understand there still is life left for him.

With this job, will Lousa’s life take a steep turn to new roads from her very mundane and monotonous life?

Unwilling to write more, I would like the reader to find the answers in the book itself. I do not want to kill line up of events and how the story takes a shape.

Author has been successful in letting the reader empathize with almost all his characters- with Will’s restrained life, with Lousa’s monotonous life, her enforced relationship with Patrick, her family’s troubled situation by the lack of money and with Will’s mother’s messed up life. The story also gives a glimpse of the life of a lower middle class family of UK.

Narration was ok, it was a mix of good and ok phases throughout the book. Light-headed dialogues were the best part in the narration. I could relate to that side of Will where he so gracefully gives sarcastic looks or comments, we sometimes get to see these people in our daily lives.

Is this a love story?

Yes, in a bigger sense, it is a love story but a little selfish one. I think that is why the name of the book is Me Before You.

Only at the middle of the book, I realized this slow and steady formation of a love story.

This book had been adapted to a Hollywood movie in 2016. I first thought that the Bollywood movie- Guzaarish-starring Hrithik and Aishwarya, was also based on this movie. But it was released in 2010 (and this novel in 2012) and was actually based on another Spanish movie. Surprisingly, the character in that movie was also quadriplegic and the actress- Aishwarya was his carer. Not sure about the inspiration, but one can not ignore the similarities that the theme had. Researching about this further, movie-adaptation has given this a wide reach and quadriplegics have not liked this book a lot. Why so? Maybe, it is better you read it and then you will get it.

Jojo Moyes is yet another addition in my To-Read authors, and I will pick his other books as well.

You will have a great time reading this one from Jojo Moyes. Do pick it up.

Me Before You -Book Review