Does Star Wars Episode VIII Even Need a Trailer?

THIS film certainly benefited from an assertive ad campaign.

It’s time to look towards the future. The campaign for Rogue One has beaten the Star Wars brand into households across the galaxy ad nauseam. While the effort of all the commercials has pushed the movie to a potential $125-million opening weekend, what if we got too much Rogue One material before the movie was even released?

That’s why we need to look beyond this week’s blockbuster release… to next year’s! December 2017 will feel very familiar, when commercials for Star Wars Episode VIII will be taking over the airwaves. We will see familiar characters, probably some explosions… and who knows, maybe even a Darth Vader sighting (you never know)! However, if one Episode VIII actor got his way… we’d see none of that.

Adam Driver got his big movie break as Kylo Ren in The Force Awakens. He will get to don the mask and cape as the leader of The Knights of Ren once again in the next episode of the saga. So far, nothing major has been leaked from the set, and as Driver told Cinemablend, he’d like to keep it that way. That includes not releasing an official movie trailer.

“I think that’d be bold. I’d love it, yeah! Then no one would know anything. The less people know, I feel like, the more exciting… the more of an event it is.” 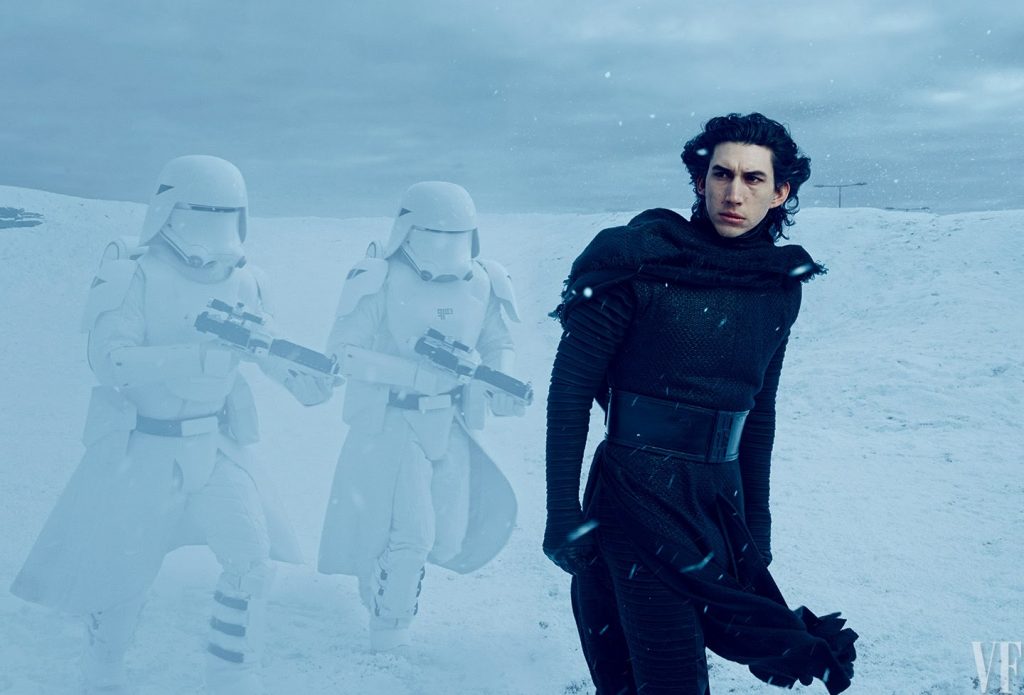 Sometimes the best marketing… is using stuff not in the final film!

It is a unique proposition and one that I wish Disney and Lucasfilm would consider. Now, I am someone that loves trailers. I even wrote an article about the influx of movie previews we received in just the past week. Spider-Man, Transformers, a Tom Cruise Mummy thing… every movie studio is doing what it takes to get people interested in their franchise releases. But does Star Wars need to go that route?

While Rogue One is clearly benefiting from its multi-million-dollar campaign, it needed that boost. Selling new faces, no Jedi, and B-list canon characters was going to take some effort. So, the marketing team built a strategy around the intense action, war-themed elements, and the occasional Darth Vader appearance. It worked, and now everyone and their mother is heading to the theaters to check it out.

Still, Episode VIII doesn’t need the ‘hard sell’ approach. The movie is literally going to pick up right where the last one left off. Anyone who is interested in seeing what happens once Rey and Luke finally speak to each other is going to be in the theater opening night. Plus, after The Force Awakens raked in over two billion dollars at the world-wide box office, there’s a lot of people who are going to want to see the continuing adventures of the Skywalker clan. The pitch is already there: “You care about this universe, see the next chapter of the journey.” Just save the money you would have spent on marketing and add it to the box office revenue that’s sure to follow.

If Disney and Lucasfilm need further proof that a trailer is a bad idea… take a look at last year’s Batman v Superman: Dawn of Justice. All people needed to see was the two titular superheroes staring each other down. However, Warner Bros. went big with their marketing and showed way too much. Fans were upset that they knew about the entire plot of the movie, even before it hit theaters. The overexposed marketing campaign could explain why the movie failed to breach the billion-dollar movie benchmark for blockbusters.

So, do we really need a trailer for Episode VIII? Look, people know what they’re getting with next year’s Star Wars outing, so there’s no need to sell us anything else. Just keep us in the dark, Lucasfilm. You’ll give fans everything, by giving them nothing. It’s the perfect marketing strategy.

The post Does Star Wars Episode Viii Even Need a Trailer? appeared first on The Source by SuperHeroStuff.

Does Star Wars Episode VIII Even Need a Trailer?