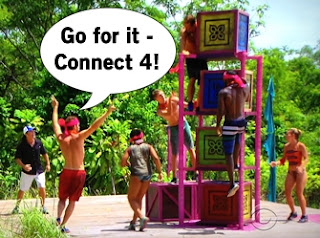 For this week's Reward Challenge, there's a schoolyard pick to split into two teams to paddle out to sea and retrieve four massive cubes. Once back to shore, those cubes have to be stacked and rotated so that no colors match. It's like opposite Rubix Cube. If you're wondering what the heavy-handed Second Chance reference for this challenge is, it's that Kelly Wiglesworth lost this challenge to "the guy who can't swim" (Gervase). So this allows for a wonderful wrap up for storyteller Probst when Wiglesworth's team wins and he can call this a successful second chance. 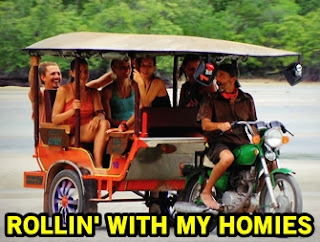 The winners of the reward are treated to iced coffee, bagels with cream cheese, cookies at the
Survivor Cafe. "You're going to OD on caffeine and sugar," Probst jokes, but all I can think of is the upset stomachs that'll come after. Hope there's an outhouse at the Survivor Cafe. With a mixed group of survivors in attendance (Kimmi, Wiglesworth, Wentworth, Joe, Ciera, Keith), Ciera thinks with a full stomach there but open minds that could be willing to talk game. I'd say there's a 30% buy-in to talk, with not as much words but definitely some internal pondering. Life-of-the-party Keith decides to take a tuk tuk (AKA "to-to") on a joy ride, leading to the most delightful moment of this season (and a GIF I can't stop texting and tweeting). 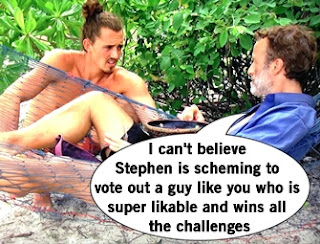 Eventhough the Bayon Bros are rewardless, they're still riding high and confident. Savage is soaking up finally making the jury and looks forward to a few days of cruise control, picking off outsiders like Ciera. But there's a slight worry in the air about Ciera trying to make a big move and turn the tables, and she'd only need a few people to flip. Cue Stephen Fishbach. Stephen's JT flashbacks continue to haunt him and he hopes this can be the time to blindside Joe out of the game, planting seeds with others around camp. Too bad Savage overhears Stephen's scheming to Tasha and is livid, because how dare Stephen scheme and deceive in a game that's basically founded on that principle. Savage reports all this back to Joe and vows to never vote Joe out ever. Joe knows he's a mega-threat and now that he's on Stephen's radar, immunity is important as ever. 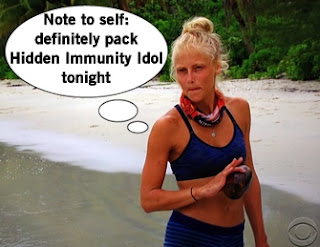 So of course Joe wins individual immunity again after he's able to balances balls on a plank the longest. C'mon Keith, you're supposed to be the champion of balls. This means the silky immunity necklace is about to soak of Joe's sweat for another three days and the survivors aren't able to vote out the game's biggest threat. Now that Joey Amazing is protected, Savage and Joe have the ammunition they need to try to corral Votes to get out Stephen. The trio of outsiders are gung-ho with Joe's suggestion to blindside Stephen (anything that saves their butts), and Savage lays in the hammock and gets all the others to agree to this plan as well. But Jeremy nixes it all since Stephen is one of his tightest allies. So it's back to the basic, go-with-the-flow plan to vote off someone not in the major alliance. Joe lets the the girls know the plan is off and gives the "I don't know yet" to Wentworth about who is getting voted off. Even if they have to go down with the ship the three have to decide if they should put their votes towards scheming Stephen or ringleader Savage. 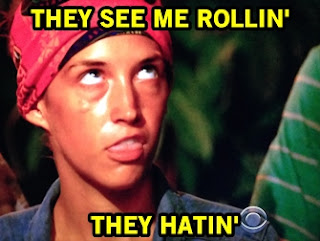 Tribal Council time! First juror Kass enters the arena by giving everyone the bird because she's the GD Queen of Ponderosa. But back to people still in the game. Ciera reiterates her feeling that people aren't fighting for a top spot and instead playing for a group. Kelley Wentworth straight-up calls out that four people are running the game and not willing to make a move, so Ciera names the four as Jeremy, Savage, Tasha, and Stephen or Joe. Jeremy's like uhhh that's five, that you don't know anything. Spencer brings up that moves could happen or maybe an idol is out there, or maybe none at all, so Wentworth tries her semi-hardest to keep a straight face. Savage drones on about having people he talks to with mutual respect which causes Ciera to roll her eyes in the most amazing, unnatural way (which of course I've practiced all week in a lot of unsent Snapchat videos). While Stephen Fishbach insists this season's alliance is like none of the past thirty seasons, we know Ciera is in the right: there are definitely people on the top and bottom of that Bayon group. Wentworth drops a big hint that someone earlier in the day wanted to make a big move which only proves that their big loving alliance isn't THAT tight in the end. Kelley doesn't out those possible flippers because they might have to be her allies in 24 hours. 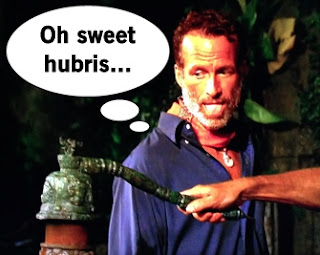 And then they vote! Probst brings out the urn of votes and asks if anyone wants to play their idol. There's a long pause and then Kelley Wentworth like a GD boss busts out her super-secret Hidden Immunity Idol and plays it. The looks of shock on everyone's face is priceless and I need each and every one in GIF form immediately. There are at least two people who look liked they pooped their pants in shock (wouldn't be shocked if they did legit let out a little nervous pee). Nine votes pour out of that bucket for Wentworth, each capped off with Probst's signature "will not count". What does count are the three votes by the outsiders who completely flip this game around when they blindside Andrew Savage. America cries tears of joy as the overconfident leader of the Bayon Bros gets his torched snuffed. "At least you made the jury!" Abi-Maria shouts and Savage leaves with one last classy move: giving the bird. SEE YA SAVAGE.

[All images credited to CBS]