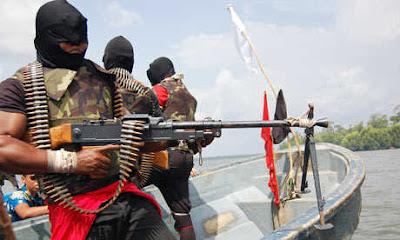 THE Niger Delta Avengers, NDA, announced on  Tuesday that it blew up the Nembe 1, 2 and 3 trunk line jointly operated by Agip, Oando and Shell Petroleum Development Company, affecting a supply of  300,000 barrels per day to Bonny Export Terminal in Bayelsa State.

Spokesperson of the militant group, self-styled Brig Gen Mudoch Agbinibo in an electronic mail, Tuesday, asserted: “ At about 11.45pmNovember 15, 2016, our elite Strike Team 03 struck Nembe 1, 2 and 3 truck line operated by Agip, Oando and Shell with supply capacity of 300,000 barrel per day to Bonny export terminal in Bayelsa State.”

“This is in response to the so-called “Operations Sharkbite,” an art of terrorism commissioned by the tyranny of the Nigerian Navy establishment and orchestrated by some elements of the ruling political class to continuously undermine any effort by the Nigerian state to addressing the legitimate demands of the people of the Niger Delta and as well a conspiracy to bloat the accounts of some security contractors and conflict merchants within the party structure of the APC.

“We are only reiterating our strong resolve that, time is running against the Nigerian government, that there is doom ahead. The Nigerian government needs our cooperation more than we need the government as it concerns the extraction of the crude oil and hydrocarbon resources in our God-given land,” it said.

NDA asserted: “We are determined to continue this war by all means necessary, until that environment prevails for a genuine dialogue and negotiations within the framework of the 16- point key demands presented to President Muhammadu Buhari by PANDEF on the 1st of November 2016.”

The group restated: “We want the peace with honour, we do not want the ‘peace of our time’. Since that moment military was drafted into the Niger Delta as an instrument of suppression to our fatherland against all peaceful protest and legitimate demands, the fear had gone. The message is getting stronger with more messengers,” the group added.