A VICTORY FOR THE STATUS QUO 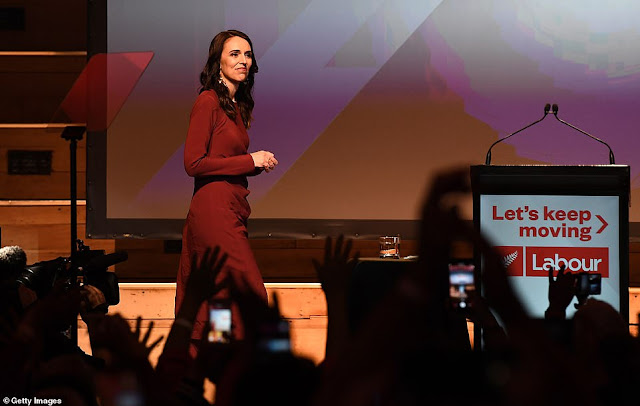 Labour might have won a decisive election victory but it also means another three years of determinedly centrist government and in an age of Economic and ecological crisis, that should be unacceptable.

ON THE EVE of the general election Jacinda Ardern declared how great it was that we could all participate in our democracy. Mmm, that's the democracy where every three years the electorate is presented with a 'choice' of market-orientated political parties to vote for. Our so-called representative democracy is broken but every three years its given a bit of spruce-up and sold to the public not as an old and clapped-out Cortina but a sparkling new Rolls Royce. Nevertheless, a lot of folk looked under the hood and didn't like what they saw.

Despite the concerted efforts made to get people to vote and the media excitement about the number of folk voting in advance, election night ended with 2,381,472 votes cast. In 2017 there was a total number of 2,630,173 votes. Some of this decline in the vote is probably coronavirus related but the historical trend is clear: a significant chunk of the electorate are feeling entirely unrepresented by our 'representative democracy'.By my rough estimate, approximately 670,000 people didn't vote.

That's got a lot to do with the fact with our elections have turned into a one horse race and that horse is neoliberalism. As John Minto has observed:

'Our main political parties are a shadow of what they were 40 years ago. They are shell organisations which rely almost totally on big corporate donations to run their election campaigns. Most of the super-rich don’t care whether we elect a Labour-led or a National-led government because the economic policies of each are barely distinguishable. Neither of them is a threat to the rich getting even more obscenely rich.'

The next three years will see a Labour Government performing its duties as the sole caretaker of the status quo, unless it decides to bring the Green's into the fold. But why should it? Its more likely to throw the Green's a few policy lollies in return for a loose 'understanding'.

If you didn't much like what Labour did - or didn't do - during its first term in office, well...tough. Because there's more where that came from. And the consequences for the New Zealand working class support will be severe. Because someone will have to pay for the deepening economic crisis and Labour has already demonstrated it won't be its friends in the corporate boardrooms who will doing any of the heavy lifting. Little wonder that the business sector seems entirely relaxed about the re-election of Labour. It knows it represents zero threat to its interests. The days when the prospect of a Labour Government inspired stories about 'capital flight' are long gone.

In contrast, those who placed their trust and votes in Labour - because 'Jacinda was really good during the lockdown' - are about to find out that there's not more to Ardern but less. I saw former Green co-leader Russel Norman on television arguing that if Labour was given the mandate to govern alone, it would be obliged to fulfil its commitment to the kind of transformation that Ardern promised in 2017. But Labour's 2020 campaign wasn't about change but about providing so-called 'stability'. It has no intention of shaking up the status quo and it was able to cannibalise a chunk of National Party vote because of its determinedly cautious and centrist message.

Blogger and commentator Chris Trotter has commented  that  'maybe as the world descends further into epidemiological and economic panic, and the planet itself turns aggressively on its dominant species, Jacinda, Labour and the Greens will prove themselves unequal to the challenge of keeping the lights on.'

Although there's some equivocation here, that's quite a statement coming from someone who normally rushes to the defence of Labour.  But, as Chris Trotter seems to recognise, in the midst of an economic recession that will savage working class communities and a climate crisis that threatens us all, now is not the time for 'politics as usual'. Its a luxury we can no longer afford.

The question is whether Labour-aligned 'progressives' will stop accommodating themselves to the neoliberal centrism of the Labour Government with its tepid 'market based solutions' to the ecological crisis - which, it should be noted, the Green Party also supports. If they don't stop the accommodating it'll be yet another three years of futilely trying to bump Labour in a more ''progressive' direction. But its three years that we don't have. Left politics in the age of climate change has to be a lot more than simply trying to persuade Jacinda Ardern and co than they are on the wrong political and economic path. Given its electoral success, Labour won't be listening.

A VICTORY FOR THE STATUS QUO