Tags: park indonesia tourist trash north sulawesi environment government
February 21st 2016
View original
Rubbishing the Republic
This is the year of Wonderful Indonesia, hopefully netting more than US$9 billion [Rp 126 trillion] from foreigner visitors.  Visa free entry has become available to scores of nationalities in a bid to boost arrivals lured by the promise of vistas green and clean.  Sadly many will be disappointed.  Duncan Graham reports:

A Guide To Visiting Antigua, Guatemal…
NBA Jam Game Comparison
Useful Tips for Building a Stronger C…
Beard Bib – Solution For Messy Groomi…
What would happen to a modern-day Mos…

When Younglive Suban (right) was driving in New Hampshire he behaved like any Indonesian.  He tossed his cigarette butt out of the window without checking the rear vision mirror.
Tailing him was a patrol car.  “Young man, do you know what you just did?” asked the cop after pulling the student over. “Do you think the US highway is your ashtray?” The fine for littering was US$ 500 [Rp 7 million] but the officer was compassionate.
“That taught me a lesson,” recalled Suban who now manages a two-hectare upmarket Tourist resort in North Sulawesi.
“I’d never thought like that before.  I changed my ways. Now back in Indonesia the car is my garbage can when I’m out driving.  I wish others would do the same.” 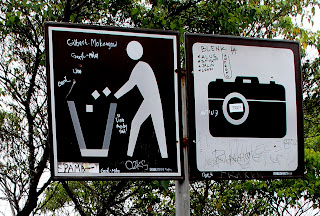 Amen. It’s not difficult to locate lookouts across tumbling green hills – just spot a pile of rubbish.  If heading into the forest follow the trails of drink bottles and cans.  Well-prepared adventurers include a knife and dye marker in their backpacks.
The first is to carve your famous name into tree trunks, the second to scribble an immortal message on any flat surface.  What to say? The current trend is for something obscene – that’s always good for a laugh.
“It’s sad, not funny,” said Basaria Tiara, second-in-charge of the Minahasa Regency Tourist Department.  “Of course it wouldn’t take long for a couple of men and a small truck to collect the mess and do some basic clean ups.
“The problem is this: Who is responsible and where’s the budget? Is it the department dealing with roads, or parks, or health or education? When the Reformasi policy came in after the fall of Soeharto [1998] the regions took over many jobs but there’s been little coordination.
“Money for capital works is available, but not maintenance.  If we put out bins they get stolen.”
One of most publicised inland tourist attractions in North Sulawesi is Bukit Kasih [variously translated as Hill of Love or Hill of Mercy.]  It’s a multi-faith 950-step journey round a smoking, steaming amphitheatre of raw geo-thermal activity. 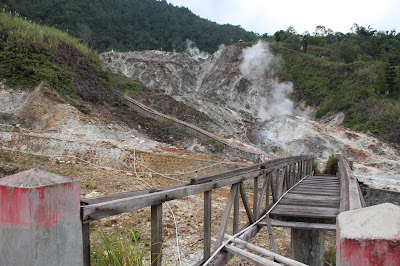 Although only opened in 2004 the place is now so badly damaged that it’s more liability than asset. Acid rain from the sulphuric fumes has eroded the infrastructure and stained the kitsch statues. Some walkways are impassable.  Visitors hoping to find a place of peace are harassed by touts.
“That’s what happens when you let officials run tourism,” said Suban, a dedicated disciple of private enterprise.
“The Government is doing a good job publicising Indonesia abroad and helping draw in tourists, but they must also look at the infrastructure and understand the market. It has several segments – not all want to sit at poolsides drinking.
“Many want to explore and learn.  I feel ashamed when I take people to a site and find garbage.”
The problem is nationwide. Environment and Forestry Ministry waste management director Sudirman recently told a seminar there were so many problems with rubbish in Indonesia that he was thinking about declaring a state of emergency.

Before talking to J Plus Suban and his business colleagues from the Himpunan Pramuwisata Indonesia [Indonesian Tourism Group HPI] where he’s secretary, spent a day picking waste off the beach in Manado.  The capital of North Sulawesi is famous as the base for exploring the Bunaken National Marine Park.
Divers come from around the world to marvel at the coral wonderland – but get offended by pollution. From the top floor of a harbor-front hotel pods of plastic can be seen swirling in the bay below. 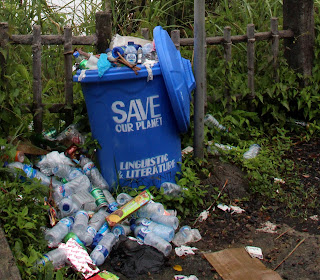 “Maintaining a clean environment is really the government’s job,” said Suban.  “They don’t do it, so we have to.  It’s not just foreigners who want cleanliness – so do we.”
HPI vice president Freddy Siwi, who runs a backpacker lodge in Tomohon mainly catering for locals, thinks the answer to making Indonesians care is to turn Trash into cash.  He’s started a collection centre for plastics and cardboard and plans to buy a machine to compress the refuse ready for sale to recyclers.
“We need a system of reward and punishment to make an impact,” he said. “If there are laws against littering they’re ignored.”
One of North Sulawesi’s must-see sites is the 1,324 meter Mount Mahawu and its green crater lake, though often shrouded in cloud. A good road leads to the park office.  There’s space to park and a sturdy staircase to the summit. Signs against shooting, logging and littering appear to indicate discipline, though many have been targeted by graffiti goons.
The Bern family from Belgium obviously thought the notices inadequate; they left a sack at the entrance with a ‘Save the nature’ message shaming others to drop their empties in their bag, not the bush.
Tiara denied that Indonesians don’t love their country. “A clean environment isn’t just for tourists,” she said. “It’s also important for our lives, our health and our children.  We just need a mindset change.
“If we have good places travellers will come.  The government doesn’t listen to locals but maybe they’ll pay attention to people from overseas.  So please speak out.” 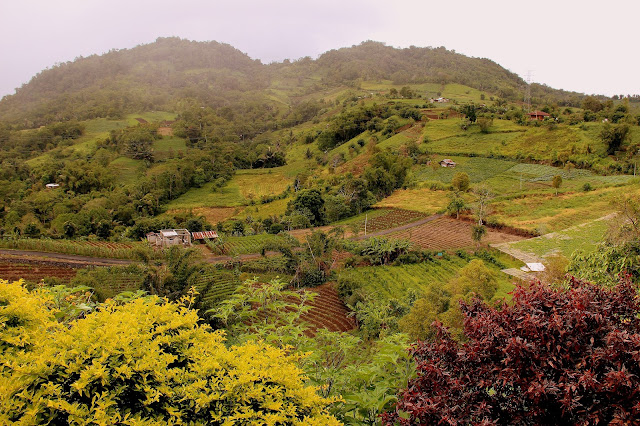 Clean up Australia
Indonesian visitors to Australia 25 years ago would have found the land to their liking. A night drive in the bush was enhanced by the glint of discarded beer cans marking the road shoulders. The more cans the closer to a town and its liquor shops.
Those days are largely gone thanks largely to the inspiration and determination of builder and yachtsman Ian Kiernan. While sailing in the late 1980s he was appalled at the pollution of Sydney Harbor.
With a few mates he organized a litter lift; to everyone’s surprise about 40,000 volunteers arrived to pick up 5,000 tonnes.  Clearly the mood had swung towards environmental care.  That drew political interest so governments got involved.
The Clean Up Australia campaign was born as a not-for-profit organization. The public backed Kiernan, now 75, because he came across as a rugged individual who cared and had no other agenda. In 1994 he was made Australian of the Year.
Parallel with the widespread collections of garbage has been legislation. Most states impose fines of AUD $400 [Rp 4 million] for litterers.
(breakout 2)
Only losers litter
Like Manado and the Minahasa highlands, Malang in East Java is an internationally-known tourist town.  It also has knock-out scenery, enhanced by ancient cultural sites nearby.  The temples of the 14th and 15thcentury Majapahit era draw visitors, along with a cooler climate.
Malang labels itself ‘green’ and ‘flower city’, but also has a trash problem, particularly in waterways.
Despite signs forbidding dumping in rivers and beauty spots, these are headstones in cemeteries of plastic and food scraps – rodents’ picnic grounds.  Building rubble is tipped in any open space, often near houses.
“It’s a worry we are trying to combat in several ways,” said Ismintarti, head of the public parks section in the local government. “Many don’t care because they think it’s not in their backyard.  But the city is their backyard - and ours. My staff have to pick up what they drop, and that’s not right.
“We are making Malang more beautiful through growing and planting flowers, so citizens enjoy and respect.”  The city has a splendid but little known nursery that could compete with botanical gardens overseas.
“We ask residents to accept personal responsibility and not assume cleanliness is solely someone else’s job,” she said. “We’re using traditional means like posters, and social media to get the message across.  We also employ an Environment Ambassador.”
Shinta Maulidya, 19, the lady with this fine title, spends her days talking to children and young adults.  Drop your Styrofoam cup in a park and you’re likely to get a tap on the shoulder from a pretty teen instead of a burly cop.  “I ask them to put their trash in the right place,” she said. “They are starting to take notice.”
It’s pointless arguing - Maulidya is a debating champion, speaks good English and has the law on her side. Fines of Rp 100,000 [US$7.25] can be imposed and smoking in parks in prohibited – a rule widely ignored.
Said Ismintarti: “It’s social engineering. Changing people’s behavior takes time.  Are we getting cleaner?”  She paused for a moment. “Yes.  I really think we are. But still far to go.”
First published in J-Plus - The Jakarta Post 21 February 2016
##


This post first appeared on INDONESIA NOW With Duncan Graham, please read the originial post: here
People also like
A Guide To Visiting Antigua, Guatemala: The Best 5 Things To Do And See
NBA Jam Game Comparison
Useful Tips for Building a Stronger Company Culture
Beard Bib – Solution For Messy Grooming
What would happen to a modern-day Moses in America?