Town Meeting revotes $67 million Wildwood Building Project end of this month
Twenty years ago the $22 million Amherst Regional High School expansion easily passed Town Meeting but was defeated by the voters at the ballot box, although it did pass months later in the second attempt.

Around that same time the $4 million Town Hall renovation twice passed overwhelmingly in Town Meeting but was twice defeated by the voters at the ballot box.

So what are the odds Town Meeting will pass the $67 million Mega School bond issue on January 30th in this second attempt to get the required two-thirds vote?

About as likely as Donald Trump getting a rousing ovation from Democrats at his inauguration on Friday.

While theoretically Town Meeting is only voting on the financing of the project it's impossible not to be influenced by the education plan which restructures our entire elementary school system.

Maria's Folly of two co-located grades 2-6 under one roof will simply never have the appeal of the current system of three K-6 neighborhood schools.

A professional survey of parents and teachers taken a week before the School Committee approved the Mega School showed overwhelming support for two co-located grades K-6 under one roof allowing Crocker Farm to remain K-6. 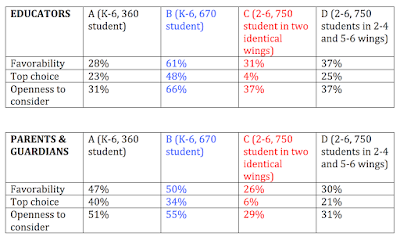 Survey results
Of course now Town Meeting will be told that teachers have changed their minds and overwhelmingly support the current education plan represented by the $67 million Mega School.

Really?  Or is it simply this expensive plan is now better than nothing?

What about the obvious pressure employees must feel when someone asks them to sign a petition endorsing the wishes of your boss?  Especially when they come up to you with a clipboard and mention that you are "on the list."  Which is fine I suppose, if the person asking is named Schindler.

Click to enlarge/read
The other pressure tactic used is to suggest Town Meeting will face retaliation for not upholding "the will of the voters." Except the will demonstrated by voters on November 8 was about as wishy washy as will gets:

And even then you have to wonder about the in-house audit of two precincts that showed 29 ballots double counted.

If/when Town Meeting fails to muster a two-thirds vote for the Mega School on January 30, town officials need to admit defeat and return to the drawing board with a hard learned lesson about what the people really want.