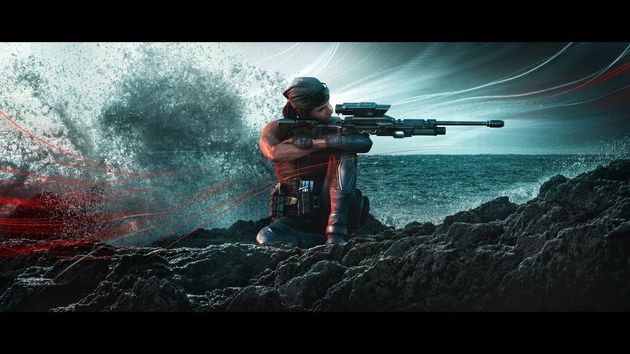 After a less than perfect reception back in 2015, Ubisoft’s Rainbow Six Siege has gone from strength to strength. Over the years it has incorporated user feedback and even won over fickle markets like India where Rainbow Six Siege now has a rabid and vocal fan base. While it isn’t as popular or pervasive as the likes of Counter-Strike: Global Offensive or PlayerUnknown’s Battlegrounds, in a country obsessed with shooters it’s managed to carve out a successful niche.

With the likes international companies like Lenovo, the ESL (Electronic Sports League), and even local outfits such as The Esports Club investing in the Indian Rainbow Six Siege ecosystem with regular tournaments, this has only increased. However there’s no bigger testament to this than Ubisoft’s creation and inclusion of Kali, a playable Indian character.

HuffPost India spoke to the team at Ubisoft Montreal about what went behind the making and inclusion of Kali in Rainbow Six Siege as well as yes, that choice of name.

Though before we get to that, we had to ask, what made the studio decide to go with an Indian operator in the first place?

“When selecting countries of origins for future Siege operators, we always consider several different parameters,” Maxime Vial, Product Manager at Ubisoft Montreal said. “First and foremost, we look at the regions of the world we want to explore, the type of stories we want to tell. To create compelling characters, the team needs to be excited about working on them. Obviously, we try to balance things out, so we don’t revisit countries we’ve already been to too often.”

“Then we look at the countries that would have players most excited. In the case of India we know Rainbow Six Siege is extremely popular and has a growing and loyal audience who are regularly playing the game competitively and casually, and we are aware that having local operators is an element of the game our fans love,” Vial added.

That said, it wasn’t without its challenges.

“We did a lot of research into the Indian army, navy, and special forces, which is when we discovered that women aren’t currently allowed to serve in combat roles,” Rainbow Six Siege Scriptwriter Leanne Taylor-Giles explained. “It helped us understand how someone like Kali would form her own company, the challenges she would face in doing so, and what her motivations might have been.”

With that in mind, the team enlisted the help of its local counterpart — Ubisoft India.

“For the cultural aspects, we worked closely with our colleagues from the Ubisoft studio in India who went above and beyond in answering our questions and providing insight – for example, they were the ones who calculated Kali’s birthday based on her name and birthplace, which of course isn’t how it’s usually done for other operators,” Taylor-Giles said. “They were invaluable to our process and we were very lucky to have their input.”

During this process, one of the names that was suggested was Kali, also the name of the Hindu goddess worshipped to this day. Religion is a sensitive issue, more so when paired with video games, so we had to ask what was the reason behind choosing Kali.

“The name immediately appealed to us, but of course we were aware of its connotations and that it could be troublesome culturally,” said Taylor-Giles. “In the end, we checked with our colleagues from the Ubisoft studio in India and when they said the use of the name should not pose a problem, we decided to go with it.”

The next step was to flesh out Kali’s backstory. As Ubisoft Montreal discovered, Indian women aren’t allowed into active service in the army, navy, or special forces. This resulted in the team considering to portray her as a businesswoman.

“We were aware of very successful and entrepreneurial Indian women in business, but Kali is in a league of her own, both in age and industry,” Taylor-Giles said. “So we used these existing success stories as our reference, but gave her a younger, more militaristic angle, which makes her unique in her culture and in the world at large.”

The uniqueness extends to her arsenal. With most combat in Rainbow Six Siege usually being at close-quarters, the team decided to kit Kali out with the first bolt-action sniper rifle in the game. This in itself proved to be quite the task. Reason being, developers have to ensure balance—the thankless job of making a new addition to a game different and fun yet not so overpowering that it turns off players from trying it out.

“We made several iterations around the ‘post-shot’ timing [experimenting with making it faster and slower], as well as tweaking the recoil to come up with something balanced for both Kali’s needs and the needs of the game,” said Gaelle Roberts, Project Manager on Rainbow Six Siege.

“The size of the rifle was also the centre of several debates: it needed to look futuristic and impressive enough for a weapon of that caliber while also making sure it wouldn’t get ridiculously long. Finally, we introduced the strongest zoom we have in Rainbow Six: Siege; it goes from 5x to 12x. Again, we had to make sure it was not too strong, not too painful to play with, nor overpowered with the long lines of sight it can create.”

It’ll be interesting to see if Kali becomes a regular pick amongst the Rainbow Six Siege faithful. Perhaps, future operators like with Kali, will involve the input of Ubisoft’s other studios (which total 44 globally) from various parts of the world to collaborate and create a diverse roster of characters.

The conversation shifts to Rainbow Six Siege’s pricing and availability. Recently, Ubisoft dropped the price of Rainbow Six Siege to Rs. 499 from Rs. 999. To many, Siege is seen as an alternative to the super popular Counter-Strike: Global Offensive. While the Valve-published title went free-to-play six years after release, is Ubisoft considering a similar move?

“There is no current plan for R6S to become a free-to-play game,” Vial said. She also said the game continues to be accessible due to programs like free weekends — which as the name suggests, allow you to download and play the game for the weekend without paying as well as leaning into the local ecosystem with “local experiential events that take place across India.”

On the topic of accessibility, Ubisoft has been a vocal proponent of cloud gaming to the point where CEO Yves Guillemot has openly speculated that the next-generation of consoles will be the last. With that in mind, it’s odd that Rainbow Six Siege is only on GeForce Now — Nvidia’s cloud gaming platform and not on others like Google Stadia.

“We are of course monitoring the evolution of the video games industry and cloud gaming is today one the biggest trend in the industry,” said Vial. “Ubisoft is working closely with actors of this sector and has already several game on Google Stadia for example. Our goal is to be where our players are, so we currently are evaluating all possibilities to make Rainbow Six Siege available on as many platforms as possible, including cloud gaming.”

Finally we had to ask what the teams plans were for the PlayStation 5 and ﻿Xbox Series X, the upcoming consoles from Sony and Microsoft respectively. With both companies ensuring backwards compatibility it means Rainbow Six Siege should be playable day one on both next-gen devices. Vial left us with this.

“As we already mentioned, Rainbow Six Siege is coming on next-generation consoles, but it’s too soon for us to share any details on this. We are excited to see the potential of these new machines.”

Sometimes, it is all rainbows!
How Much Do Kitchen Splashbacks Cost …
Is Self-Help a Scam
How To Get From Lima To Cusco Peru {T…
Cutting perfect circles with Olfa and…