A Viral Video Claimed Militants Were Being Trained For Kashmir; Here’s What We Found 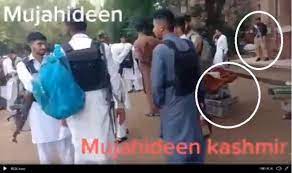 A selfie video showing young men armed with weapons and bullet proof vests assembled in what appears to be a campus, has gone viral on Twitter in India on Monday.

The 28-second video has the words ‘Mujahideen’ and ‘Mujahideen Kashmir’ written on it. It has also been overlaid with the song ‘Ay Watan Tera Ishara Aa Gaya.’

A voice speaking in Pashto can be heard at the beginning saying, “these are all Mujahideens, and they are ready to go to Kashmir for jihad.”

Toward the end of the clip the man shooting the video and carrying a rifle and wearing a black vest can be seen.

Here is the first proof what I said yesterday about Infiltration of Terrorists.

I don’t post useless things untill and unless I don’t confirm it from my sources. I got confirmation from many people.

This is Naya Pakistan where you can see 1000s terrorists roaming free with guns.
DGISPR recruits.indoctrinates and use poor uneducated young boys as guinea pig for Kashmir Jihad.
Pak Army will continue their loot in Pakistan as they subleased Kashnir war to these flunkey Jokers pic.twitter.com/hC7SVj8QAr

In addition, one can spot a metal trunk and other luggage, which led us to believe that the video was probably shot on the campus of a police or armed forces training institute in Pakistan.

Several frames of a red and beige brick building are visible when the camera pans in the video.

A large number of men in the video can also be seen wearing Pathani suits or Pathani Kurtas.

Therefore, we decided to restrict our search to Police Training institutes in the Khyber Pakhtunkhwa region.

We zeroed in on the Police Training College (PTC) Hangu at
Kohat Road, Khyber Pakhtunkhwa, Pakistan.

A photograph of the main building is visible on the dashboard of the institute’s website. The video appears to be taken at the back of one of the buildings which is adjacent to a ground. 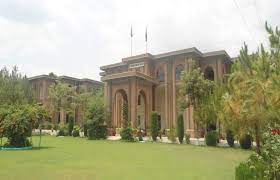 BOOM also found a Facebook page – PTC Hangu. The page though is not verified.

We then used whopostedwhat.com – a free Facebook graph search and in the Location field entered ‘PTC Hangu’ showing us posts from people on Facebook who mentioned the institute.

Among the search results was a profile of one Nasrullah Khan – the man who recorded the original video.

The Man Who Shot The Video

Nasrullah Khan posted the video on September 1, 2019. The clip is the same as the video that has gone viral including the audio and text that has been overlaid on it.

The image of weapon is a stock image photo that has been described as an AK 47 online.

His current Facebook profile picture shows him wearing a uniform of the institute.

BOOM did a side by side comparison where he can be seen in the video with his Facebook profile photo.

It is not clear whether Nasrullah Khan posted the video out of hubris or as a joke as multiple comments on the video suggest the police trainees were being deployed for Muharram duty. Muharram will be observed on September 10, 2019.

An email and a message to the Facebook page of Police Training College Hangu went unanswered till the time of publishing.

A Viral Video Claimed Militants Were Being Trained For Kashmir; Here’s What We Found