Heather Coulombe says it was more of an act of desperation than a clever marketing ploy to offer land to job applicants.

In the fall of 2016, the co-owner of the Farmer’s Daughter Country Market in Whycocomagh, Cape Breton, couldn’t figure out how she would keep her business operating. 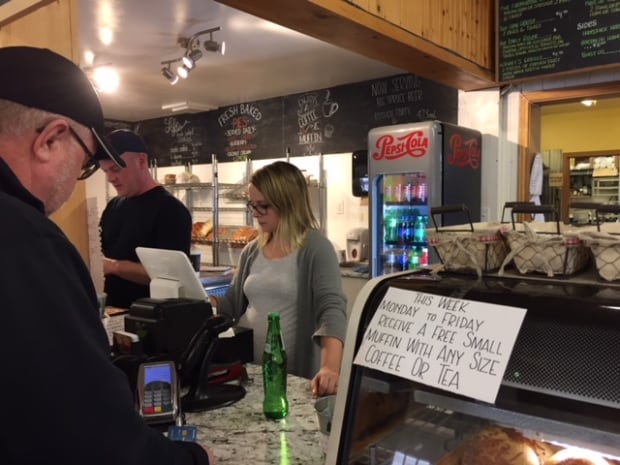 The Farmer’s Daughter Market is a busy stop on the Trans-Canada Highway that employs 100 people.

With almost the entire staff of university students planning to return to class, Coulombe and her sister thought they might have to shut down their year-round business.

“We started putting ads up on Service Canada and stuff like that, and we weren’t getting anyone local, we were getting people from overseas,” said Coulombe.

“We looked into doing immigration and stuff, but that was going to take too long. So we actually put ads on Kijiji right across the country, but we didn’t get anyone there either,” she said. 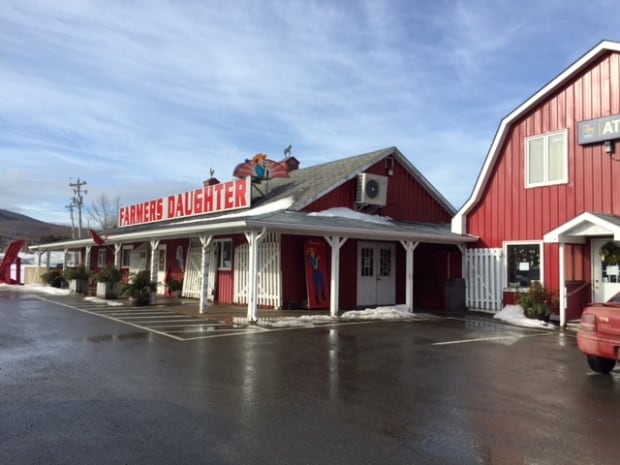 It’s been tough for the Farmer’s Daughter Market to find workers in Whycocomagh, which has a population of only 400 people. (Wendy Martin)

The Farmer’s Daughter Country market is on the Trans-Canada Highway, about an hour from the Marine Atlantic ferry terminal in North Sydney and half an hour from the Canso Causeway that separates the Nova Scotia mainland from Cape Breton.

It’s tough to find year-round workers in Cape Breton, especially for lower-paying jobs. There are only 400 people living in Whycocomagh, with another 600 in the adjacent First Nations community of Waycobah.

‘She said, ‘We’re going to give them our land for free.’  And I just sort of stood there, and was very very quiet.’
– Heather Coulombe

While admiring the view, she came up with an unusual solution to the market’s challenge of attracting and retaining workers, and rushed back to tell Heather about it.

“She said, ‘We’re going to give them our land for free.’ I just sort of stood there, and was very very quiet. And she goes, ‘Are you going to say anything?’ I said, ‘I’m digesting this, I’m thinking about it.’  And then I said, ‘It could work.'” 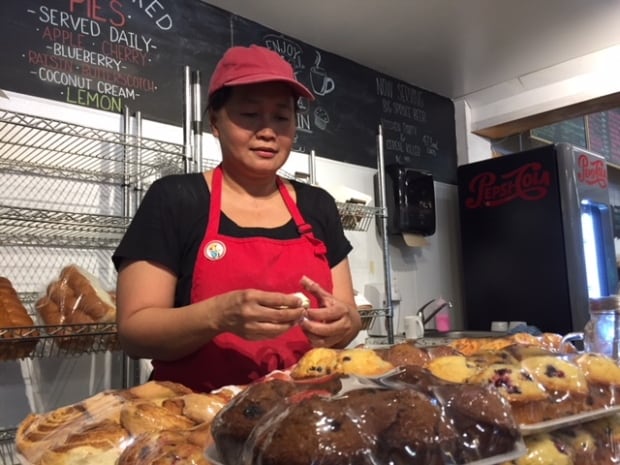 Lina Roxas took a job at the Farmer’s Daughter and feels at home in Whycocomagh. (Wendy Martin)

The sisters posted their appeal in August 2016 on the Farmer’s Daughter Market’s Facebook page.

Their message celebrated what makes life in Cape Breton so special as well as offering to give away parcels of the family land and a job, to anyone willing to move to the community.

“One thing our business does have is lots of land. If you decide this opportunity might fit your dreams and goals for a close to nature and community-focused life, we are willing to offer you two acres of wooded land where you can immediately set up your tiny house or quaint cabin,” Heather Coulombe said.

“If you’re still working for us in five years, and we still like each other after that time, the land is yours for the cost of migrating it and putting it in your name.”

Within a week, they had received 4,000 applications. Right now their inbox has over 300,000 offers from around the world.

The Coulombe sisters may have stumbled on a solution to rural Canada’s immigration problem. The incredible response to their land-for-jobs offer has caught the attention of municipal, provincial and federal levels of government.