Ally Venable Releases New Video “Hate…
Discover the Magic of Venice in Novem…
How Does Blackjack in Latin America W…
Mental Slot Review and Playtest (NoLi…
Homemade No Churn Raspberry Ice Cream
The value of China's imports from Belt and Road countries stood at $666 billion in 2017, an increase of 20 percent year-on-year, or 39 percent of China's total imports value, according to a report compiled by the State Information Center, a State Council think tank.
In the same year, China's exports to those countries came in at $774.26 billion, a rise of 8.5 percent year-on-year. The growth of imports outpaced exports for the first time since the Belt and Road Initiative was proposed five years ago.
China's combined trade with those countries reached $1.44 trillion, up 13.4 percent year-on-year, 5.9 percentage points faster than China's overall trade growth.
The Belt and Road Initiative was proposed by China in 2013 to boost trade and investment among countries along the ancient Silk Road trade routes from Asia to Europe and Africa.
China's trade with Central Asia countries grew at the fastest rate, followed by Eastern Europe. Countries including Republic of Korea, Vietnam, Malaysia, India and Russia rank among China's top 10 trading partners along the routes, contributing nearly 70 percent of China's trade with Belt and Road countries.
China mainly sells mechanical and electrical products to Belt and Road countries, and imports mechanical and electrical products as well as fossil fuel from them, the report said.
Chinese private companies do the biggest chunk of trade, followed by foreign-invested companies and State-owned firms.
Yu Shiyang, director of the department of big data development under the State Information Center, said that amid rising protectionism by some countries, China's trade with Belt and Road countries had risen at a brisk pace, showing the initiative was being implemented well, featuring free trade flow.
The report covers 71 countries along the Belt and Road summarizing the current trade picture and projecting future trends.
One of China’s leading port city, Ningbo is also pitched in its own effort for the Belt and Road Initiative via the establishment of a Central and Eastern Europe Innovation Center. 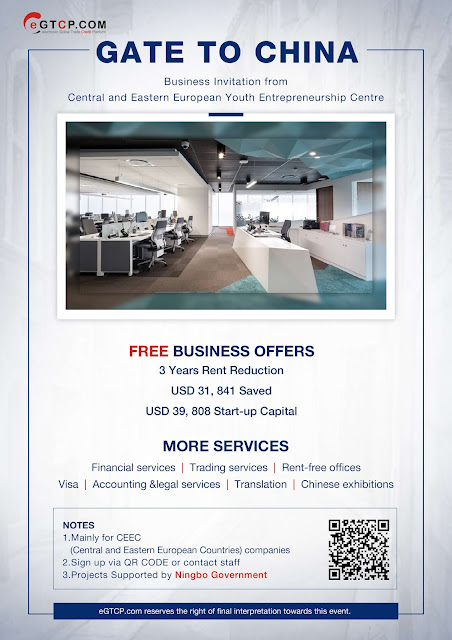 For more details, please contact us or visit us at www.egtcp.com.
Popular services in global trade:
Do you need financial service ($100,000) in global trade?
Why not check your partner’s credit score before doing business?
factory inspection/loading monitor/trade assurance
Follow us:
You can also contact eGTCP.com directly via mail ([email protected]) or phone (+86 400-159-8448).