The bulls are gradually regaining control of the daily bar chart pattern of Sensex. After completely filling the downward 'gap' formed on Mar 12th, the index has moved above its 200 day EMA and the 61.8% Fibonacci retracement level of 35920 into bull territory.

Bears are on the back foot - thanks to net buying by FIIs and DIIs. But they haven't thrown in the towel yet. Why? Because the index has formed a bearish 'rising wedge' pattern during the past four weeks. The likely breakout from such a pattern is downwards.

Daily technical indicators are in Bullish zones, but starting to look overbought. MACD is moving sideways in bullish zone along with its merged signal line. ROC has dropped to seek support from its 10 day MA. RSI and Slow stochastic are rising inside their respective overbought zones.

All four indicators are showing negative divergences by failing to rise higher with the index. Remember that a flood of short-term liquidity can overcome technical headwinds. However, the index has already gained more than 40% from its Mar 24th low. It may be better to err on the side of caution.

A global economic recession is looming ahead. India will not be spared. Periodic announcements - like several investments in Jio and launching of virus vaccines by different companies - have stoked bullish sentiment. That may not be able to sustain the rally much further.

Timely profit booking is a discipline that should be followed by small investors. You only make money when you sell at a profit. 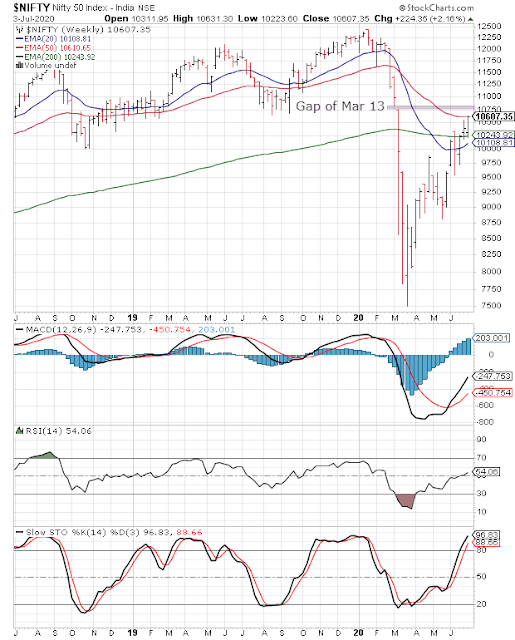 For the third week in a row, the weekly bar chart pattern of Nifty closed above its 200 week EMA in long-term bull territory, gaining almost 225 points (2.2%) on a weekly closing basis.
The breach of the 200 week EMA is a bullish sign. The index has closed above an important resistance level - the 61.8% Fibonacci retracement level of 10550. However, the zone (10610-10750) between the 50 week EMA and the 76 points downward 'gap' formed in the week ending on May 13th may provide stronger resistance.
Weekly technical indicators are looking bullish. MACD continues to rise above its signal line inside oversold zone. The signal line has formed a bullish 'rounding bottom' pattern. RSI has moved above its 50% level. Slow stochastic is well inside its overbought zone. Caution is advised as the upside risk is increasing.
Nifty's TTM P/E has moved up to 27.78, which is well inside its overbought zone. The breadth indicator NSE TRIN (not shown) is falling towards its overbought zone. Near-term index upside may be limited.
Bottomline? Ongoing rallies on Sensex and Nifty charts are gradually overcoming important resistance levels. Short-term liquidity flows have given bulls the upper hand. Bears are not out of the game. Be prepared for corrective moves at any time.