A Complete Guide on How to Watch EPL Online

After the phenomenal win by Leicester City last season, get ready for English Premier League once again. The 2016/17 season start from August 13th and is scheduled to end on May 21st. There are a lot of expectations this season as colossal transfers are being made, new managers are taking charge of some of the best EPL teams, and old rivalries will be sparked once again.

CBD 2020: What to Expect + Our Top Pr…
Coach Depression sent in the play, wh…
A Wonderful Winter Ahead At One Snowm…
How to battle decreasing Testosterone
7 Secrets Tying Runners And Entrepren…

But what good is it if you can’t watch EPL online?

Fortunately, our guide will show you different ways to watch Barclays Premier League matches. Find out which channels to use, how to access them from anywhere, and which are the best to enjoy all the goals, thrills and spills from the world of EPL.

When it comes to finding channels to live stream EPL online, you can be spoiled for choice. There are numerous broadcasters that will showcase various matches. But there is a catch!

These streaming channels are only accessible in certain regions. Due to content licensing issue, these broadcasters will only televise matches within their specified regions. If that’s not enough, different channels will showcase some of the matches, but not all of them.

One way of getting around this problem is through a VPN service. With a VPN by your side, you can unblock all of these channels and watch EPL online from anywhere.

Note: If your region is not mentioned in the table above, then don’t worry. Using anyone of these channels, you can watch English Premier Leagues matches online.

How Does A VPN Help To Watch EPL Online

With English Premier League being broadcasted all over the world, it can be really hard to find a channel that will broadcast your favorite club’s match. This is where a VPN comes into play as it is the best tool to circumvent geo-restrictions. The illustrious server spread offered by VPNs such as PureVPN or ExpressVPN allow you to bypass these geo-restrictions.

To live stream EPL online, all you have to do is connected to a server provided by the VPN service. This way, your original IP address is masked and replaced with the IP address of the VPN server; enabling you to access the blocked channel. For instance, if you want to watch BPL on STAR Sports, just connect to a VPN server based in India and you’ll be able to access the channel from anywhere.

How to Watch Premier League Online In USA on NBC

Fancy watching soccer in America? Then nothing comes close to NBC. It is the largest broadcaster of English Premier League in USA. All the matches are shown in HD quality, allowing you to enjoy the fast pace action from EPL in crystal clear view.

Now if you are someone who is on the move and travels a lot then you can utilize NBC’s mobile app. Just download the app onto your mobile device and gain all access to Premier League action in USA. But what if you are not located in America, then how to watch Premier League online in USA?

Simply connect to a VPN service and unblock NBC to watch EPL online. A VPN will allow you to spoof your location and enable you to access NBC from anywhere.

How To Watch EPL Online In India on Hotstar

For all the Indian EPL fanatics looking to stream their favorite club’s match, Hotstar is the best option to use. Previously, Star Sports used to provide free coverage of all the matches, but things have changed for 2016/17 season. Hotstar is an on-demand streaming service that offers numerous TV shows, movies, and live sports events including EPL.

To watch EPL online in India, all you need to do is subscribe to Hotstar’s premium account and enjoy live action from Premier League. The premium account is available for ₹199, which rounds of to $3.00 per month, not a bad deal in our opinion considering the first month is free.

But what if you’re located outside India, how can you watch EPL online on Hotstar?

Hotstar is an exclusive streaming service that is only available in India. If you try to access the service from any other region except India, you will be blocked off due to geo-restrictions. That said, a VPN will allow you to stream EPL online in India on Hotstar. By connecting to a server located in India, you can easily bypass geo-restrictions and enjoy EPL from anywhere.

Here’s what happened when we tried to watch a video on Hotstar from outside India (without VPN): 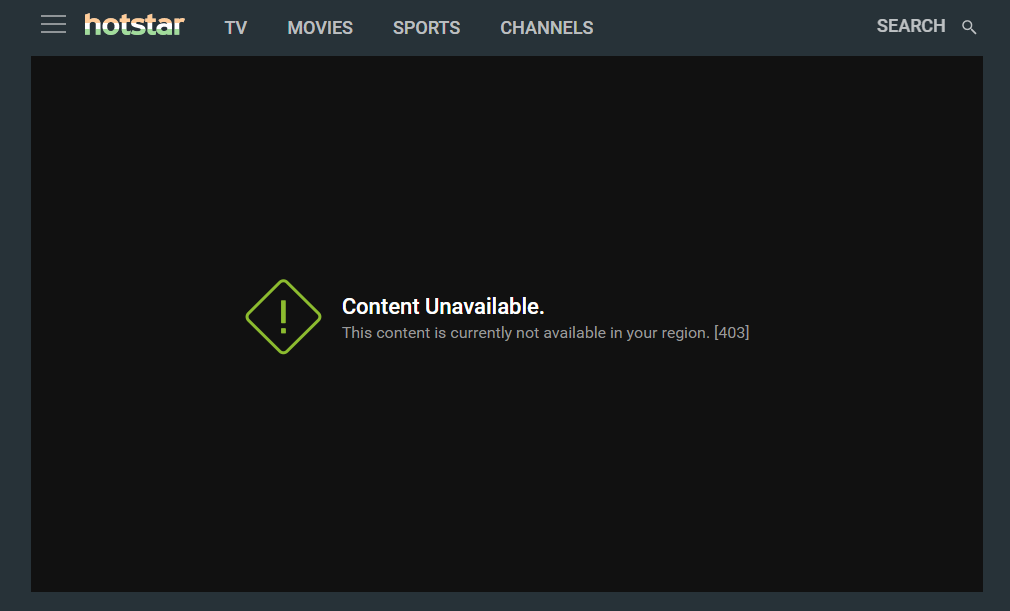 After connecting to a VPN: 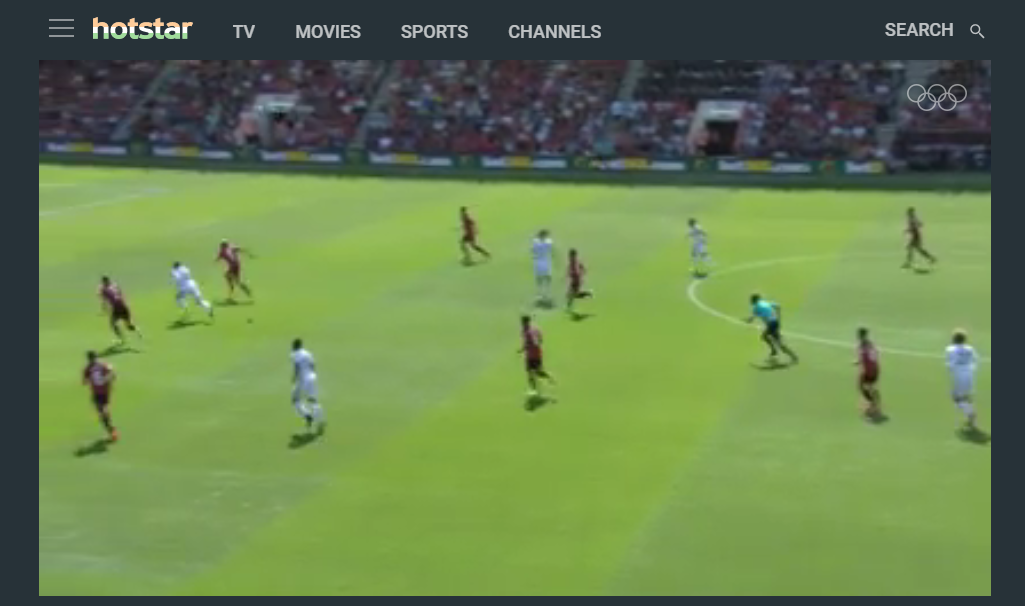 How To Watch EPL Online In Singapore on Eleven Sports

In Singapore, one of the best ways to watch EPL online is through Eleven Sports. The broadcaster offers viewers to watch their favorite football club from English Premier League by choosing from its three subscription plans. Once you have signed up for Eleven Sports, you can watch the entire EPL 2016/17 season online.

Do note that Eleven Sports is exclusive to users located in Singapore. This can pose a problem for anyone trying to access the channel from outside Singapore. The following error message appeared when we tried to sign up for Eleven Sports from New York:

To get around this issue, you need a tool to change your virtual location. The VPN providers mentioned earlier in the table will help you unblock Eleven Sports from any corner on earth. By using a server situated in Singapore will allow you to jump around digital fences and live stream EPL.

How To Watch EPL Online In Australia on Optus

With the global presence of Premier League, it is not hard to see that many Australian viewers also look for ways to watch EPL online. The most suitable option to stream matches from EPL is through Optus. This Australian broadcaster will showcase every match from every EPL team live online. You also get on-demand matches and highlights of your favorite club from Premier League.

Since Optus is an Australian streaming service, it can only be accessed from within Australia. This is where a VPN comes into play. With a VPN by your side, you can unblock Optus to watch EPL online in Australia.

How To Watch EPL Online in NZ on beIN Sports

For Premier League fans located in New Zealand, beIN Sports is the best method to watch EPL online. beIN Sports offers exclusive coverage of English Premier League matches, allowing you to see if The Foxes can repeat the heroics from last year or watching the new managers compete against each other. But like any other streaming channel, beIN Sports is only available in selected countries.

So how do you get rid of this message and watch EPL online in NZ? The answer – virtual private network. As we have mentioned earlier, a VPN is one of the tools circumvent geographic restrictions and unblock streaming channels. Therefore, to watch Premier League online on beIN Sports, just connect to a VPN and enjoy live football action.

Can I Watch EPL Without Cable?

For all Premier League fans that are wondering whether it is possible to watch EPL without cable, we can simple say ‘YES’. Cord cutting is (or might be) the next big thing but one of the worries of all cord cutters is how to enjoy live sports events.

There are many ways through which you can enjoy all the action from Premier League and don’t need a cable subscription for it. These options include:

Sling TV is an American streaming service that showcases numerous channels. You can subscribe to their service and get instant access to sports channels such as NBC and beIN Sports without the need for a cable subscription.

Similarly, different streaming boxes such as Roku, Apple TV, and Chromecast offer various apps for you to use. Among these apps are sports channels that will allow you to watch EPL live online. Likewise, gaming consoles also have their own app stores (Xbox Live and PlayStation VUE) from where you can download different to stream live matches from Barclays Premier League.

So if you are a fan of Arsenal, Chelsea, Manchester United, Liverpool or any other football club, don’t miss the start of 2016/17 season as it begins from August 13th 2016. This is a season that you cannot miss as some of the best managers in the world are heading over to Barclays Premier League.

You can watch Pep Guardiola taking charge of Manchester City, while Jose Mourinho returns to EPL as he heads to Manchester United, and Antonio Conte takes the helm of Chelsea. In the midst of these new managers, old EPL guns such as Jurgen Klopp and Arsene Wenger, and last season’s top manager Claudio Ranieri will be looking to take their clubs to new heights

To enjoy all the action from the world’s greatest league, you can watch EPL online using anyone of the methods mentioned above. Just select broadcasters of your choice, connect to a VPN to unblock the channel, and witness breathtaking action from Premier League online.

A Complete Guide on How to Watch EPL Online