mtPaint is a lightweight open source paint application for Linux and Windows. It is is aimed at creating indexed palette images and pixel art, and is designed to be simple and easy to use. 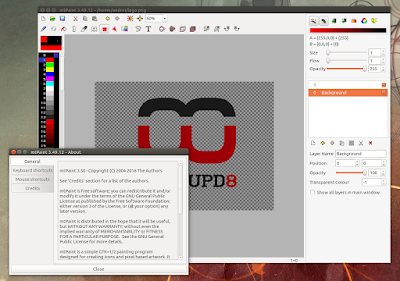 how to improve vision in 7 days
Buying an NFT as it mints can often b…
Christmas gift ideas for 2021
Karen S. Wiesner, Tension and Twists,…
Wuzzuf’s Ameer Sherif Steps Down as C…
mtPaint features:

The latest mtPaint 3.50 development release (3.49.12) ships with a huge list of new features and improvements, most notably:
A complete changelog can be found HERE.

mtPaint 3.40 (stable) is available in the official repositories so if you want to use the old version, released back in 2011, you can install it using the following command:
To install the latest mtPaint 3.50 development release (version 3.49.12 at the time I'm writing this article) in Ubuntu or Linux Mint, you can use the new WebUpd8 mtPaint PPA.
I decided to create a new PPA so you can easily purge the PPA to go back to the version available in the official Ubuntu / Linux Mint repositories, without affecting other packages.
Add the PPA and install the latest mtPaint 3.50 development release in Ubuntu 16.10, 16.04 or 14.04 / Linux Mint 18.x or 17.x by using the following commands:
I also uploaded the latest mtPaint documentation to the PPA, as a separate package. To install it (it's listed as a "recommended" package and it will be automatically installed in Ubuntu in most cases, but not in Linux Mint), after adding the PPA, use the following command:
The documentation can be accessed from the mtPaint Help menu.

If you don't want to add the PPA, you can grab the deb from HERE (but you won't receive any updates!).
For other Linux distributions, download the latest mtPaint source code from GitHub.
Windows users can download mtPaint stable from SourceForge.

If for some reason you don't want to use the latest mtPaint 3.50 development release and you want to go back to the version available in the official Ubuntu repositories, you can use PPA Purge.
PPA purge will disable the WebUpd8 mtPaint PPA and downgrade mtPaint. To do this, use the following commands:

This post first appeared on Web Upd8: Ubuntu / Linux, please read the originial post: here
People also like
how to improve vision in 7 days
Buying an NFT as it mints can often be the worst time to invest if a user hopes…
Christmas gift ideas for 2021
Karen S. Wiesner, Tension and Twists, Part 3 (Writer's Craft Article)
Wuzzuf’s Ameer Sherif Steps Down as CEO, Buckles Up for ITIDA