Start working, you don’t have much time, Rahul tells Modi 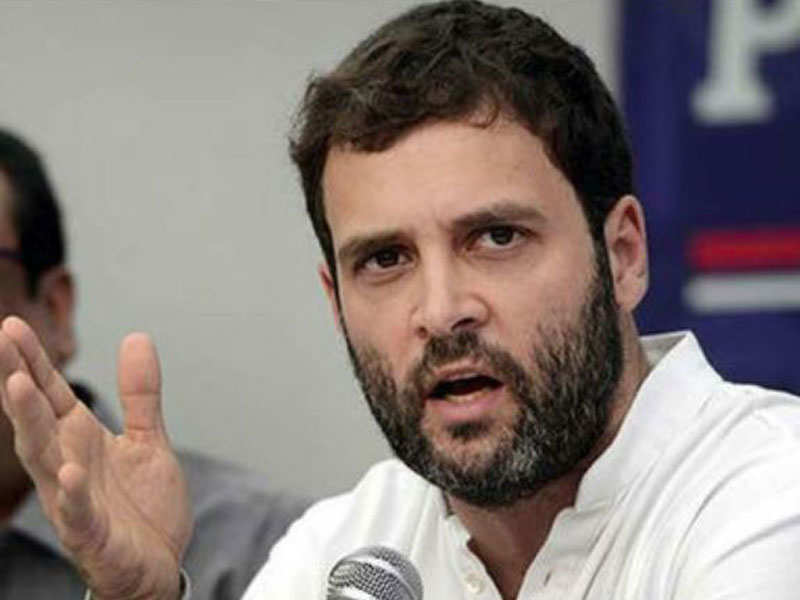 KARATAGI (KARNATAKA): Lashing out at Prime Minister Narendra Modi, Congress president Rahul Gandhi on Saturday asked him to stop giving speeches on the past and start working, saying he did not have much time before completing his term.
“You will have to tell the country during the elections what you did in the last five years. It is going to be five years and you have not even opened your account,” he told Modi, making him the focal point of his attack in a series of roadside and public meetings. On the second day of his ongoing “Janashirvada Yatra” in northern parts of the poll-bound Karnataka, he said Modi was delving into the past to attack the Congress rather than accounting for his own performance.

Rahul said, “BJP failed to create jobs, bring back black money and brought down the economy. All that Modi talks about is Congress is this, Congress is that.”

He said the country had made Modi Prime Minister to provide employment to youth, to help farmers, to establish schools and hospitals and not to talk about Congress party.

“Modi ji stop giving speeches and start working, because you don’t have much time.

Invoking the pithy saying “work is worship for Karnataka’s 12th century social reformer and philosopher Basavanna”, Rahul said, “Modi ji, you keep taking Basavanna‘s name, but you don’t work. You keep talking, but you don’t work. Even if you talk, you only talk about the past.” Claiming that the Congress “does what it says”, Gandhi said his party always worked for the future, while Modi drove the vehicle looking at the rearview mirror.

“That’s the reason your vehicle falls into ditch or faces accident… You only keep thinking about the past and then do something like demonetisation which created loss for crores of people and implement GST ‘Gabbar Singh Tax’,” he charged.

He also claimed that the Modi government was “slowly” waiving the loans of businessmen who had debt of around Rs 10 lakh crore, but refused to write off farmers’ debt.

Rahul Gandhi stepped up his attack on the BJP over the issue of corruption saying, “In the last five years, there was not even a single scam under Congress’s Siddaramaiah government while the BJP had broken world records in graft cases in Karnataka.” The Congress president, continuing with the first leg of his four-day poll campaign in Hyderabad-Karnataka region, said, “when the BJP was in power in the state, there were scams one after the other from mining to what not, different scams.”

Hyderabad-Karnataka region comprises the districts of Bidar, Yadgir, Raichur, Koppal, Ballari and Kalaburagi which were part of the Nizam ruled Hyderabad state till 1948.

At the public meetings, Gandhi hit out at Modi for talking about corruption in Karnataka overlooking his own party’s “track record” when it was in power in the state.

Pointing out that the Previous Bjp Government (2008-13) had seen three chief ministers, he said four ministers had gone to jail and had to resign.
“But still Modiji comes here and speaks about corruption against us,” he said.
The BJP government in the state had seen three chief ministers — B S Yeddyurappa, Sadananda Gowda and Jagadish Shettar — in five years from 2008. “The previous BJP government in Karnataka broke world records in corruption and they come here and talk on corruption pointing at us,” he added.
The Congress president, who is travelling by a special bus along with other state leaders, received an enthusiastic response from party workers and people who had gathered in large numbers on both sides of the road at different places. Gandhi also alighted from the bus and walked some distance along with chief minister Siddaramaiah and KPCC president G Parameshwara at Kushtagi, giving anxious moments to security personnel as the surging crowds tried to get close to him.
Source : timesofindia

This post first appeared on Daily Kiran, please read the originial post: here
People also like
Mental Slot Review and Playtest (NoLimit City)
35 Sanity-Saving Moving Hacks For Families
Twitter Opens Account Verification Program For Everyone; Here’s How You Can Apply
A Balanced Response to Allen Gwinn
What Is the Worst Credit Score?

Start working, you don’t have much time, Rahul tells Modi