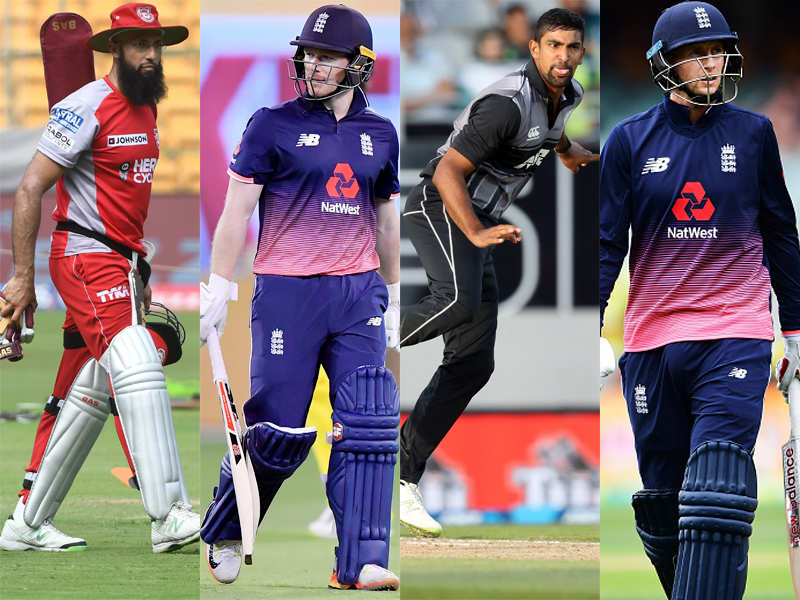 NEW DELHI: While a roster of international and uncapped players went for big bucks over this weekend’s 2018 IPL player auction in Bengaluru, there were many experienced cricketers who went unsold despite. Here are the 10 most prominent of them who failed to attract any bids.

The No. 1 ranked bowler in T20Is, Ludhiana-born legspinner Sodhi would have been eyeing an IPL contract after an impressive run, but it was not to be. During the 2017-18 international season, Sodhi claimed 18 wickets at economy of seven per over, and in the ongoing Super Smash (New Zealand’s domestic T20 competition) has 10 wickets at an economy of 7.30. With legspin the hottest commodity in T20s today, Sodhi’s brand of slow bowling looked like being highly valued in the IPL. But come the auction, he was completely sidelined as franchises spent on legspinners Rashid Khan, Yuzvendra Chahal, Kuldeep Yadav and Amit Mishra instead.

The blonde legspinner has a fine record for Australia in T20Is: 15 wickets at an economy rate of 5.92 and strike-rate of 15. In two IPL seasons for Rising Pune Supergiants, Zampa claimed 19 wickets with a best of 6/19. Outside the IPL, he has success for Adelaide Strikers, Melbourne Stars and Sydney Thunder in the BBL and 15 wickets at an economy rate of 7.07 for Guyana Amazon Warriors in the CPL.

Somehow, Guptill has not cracked the IPL despite his prowess as a big-hitting opener the world over. Having previously been on the rosters KXIP and Mumbai Indians – for whom he scored 132 runs in seven games and 57 in three – the New Zealand opener would have expected a third shot since he kept his base price at a very reasonable Rs 75 lakh. This is a batsman with 1954 runs in T20Is for New Zealand, but maybe his poor run in T20Is last year (55 runs in four games) was a factor. In other T20 leagues, Guptill has fared better: 862 runs in 31 innings for Guyana Amazon Warriors, 265 in 10 for St Kitts and Nevis Patriots, and 476 in 14 for Derbshire. But when it comes to the IPL, his skills do not find much value.

England’s best all-format, all-surface batsman found no interest from IPL franchises largely because, it would seem, he has to report back to England before the end of the 11th season. If there were doubts as to whether Root can score quickly in Indian conditions, there need not have been because his T20I record in India is very good – an average of 53.57 and strike-rate of 128.86. During England’s run to the final of the 2016 ICC World Twenty20 in India, Root hit 249 runs in six innings at a strike-rate of 146.57, with a whirlwind 83 from 43 balls against South Africa one for the ages and another sparkling 54 versus West Indies in the summit clash. Though never part of any T20 league outside of England, Root has scored 743 runs in 23 T20I innings and 582 in 28 innings for Yorkshire.

The left-hand batsman was a pillar for KXIP across 71 games dating back to the first IPL, from which he scored 2477 runs at an average of 39.95 with one century and 20 half-centuries to sit atop their overall chart. Perhaps not playing a T20 since August was a factor in Marsh, 34, going unsold.

England’s limited-overs captain failed to attract any bids over the auction weekend. Though he last played T20 cricket in September, Morgan can point to 5073 career runs, of which 1576 have come at the international level at a strike-rate of 130.46. The left-hand batsman’s skills have been valued in T20 leagues in the Caribbean, Australia and the UAE but in this year’s IPL he will not have any role to play despite being free for the entire tournament. Morgan, 31, previously played for RCB, KXIP, Kolkata Knight Riders and Sunrisers Hyderabad.

The England opener, ranked eighth in T20Is, was another overseas star who went unsold. With 4544 career runs at a strike-rate of 143.52, including success for England, Nottinghamshire and three Big Bash League franchise, the six-hitter did not attract any IPL franchise. With a base price of Rs 1 Crore, he could have been an asset to franchises looking for explosive overseas openers available for the full tournament.

Corey Anderson (base price Rs 2 crore)
The New Zealand allrounder has not played at any level since July 2017 and underwent back surgery in September to repair a stress fracture. This, coupled with a high base price, could have dissuaded franchise owners from chasing his services. Anderson has a 36-ball T20I hundred and an IPL best of 95* for Mumbai Indians, and is a proven partnership-breaker with the ball, but that appears to not have mattered this season.
Lendl Simmons (base price Rs 1.5 crore)
A high base price and a poor 2017 IPL for defending champions Mumbai Indians (137 runs in seven innings) and a middling CPL season for Jamaica Tallawahs (256 runs in 11 innings) may have been why Simmons, 33, did not get picked up at the auction.
Source : timesofindia