There’s certain charm about Indian Hockey that continues to make it a widely debated and followed sport in the country despite years of underachievement. Time and again, hopes of a return to its glorious past are raised but they eventually crash with a surprising thud. The recent India men’s hockey teams might not enjoy the position of an unchallenged authority of its predecessors but nevertheless, every time it takes the field, the expectations invariably are sky high. The 2017 was no different and was another example of the mixed fortunes Indian hockey has become accustomed to endure season after season.

Beard Bib – Solution For Messy Groomi…
Retro PlayStation games coming to new…
Newchic – Up to 20% off Men’s Spring-…
Is Huobi Global Safe? Huobi Exchange …
Save Cost And Time With This Guide On…

It was a season that could be divided into two halves of unequal proportion. In the first half, comprising the first nine months, the men’s team underperformed and the women’s gave mixed results. The men’s season began in late April in Malaysia where they were one of the favourites to win the Sultan Azlan Shah Cup. But for the second year in a row, they failed to make it to the final and had to contend with a third-place finish. Captain PR Sreejesh ended up hurting his knee during the event and he had to sit out for the rest of the year. In his absence, young Manpreet Singh was handed the captain’s armband.

A month later, India travelled to London for the Hockey World League Semi Final. The tournament proved to be a disaster. They lost to a lowly Canada in their final match, finishing a poor sixth. In the space of a month, they had failed twice on the global stage.

The poor results prompted the management to fast track several juniors into the senior team for a 10-day Europe Tour where they faced Olympic silver medallist Belgium and powerhouse Netherlands. They lost both their games against Belgium but managed to upset Netherlands 4-3 and 2-1. They ended the European sojourn with a 4-3 win against Austria. The performances were not outstanding but certainly served as a balm to lessen the pain of their recent struggles.

However, the European tour also triggered the exit of coach Roelant Oltmans as he was sacked in September by Hockey India (HI) during a three-day meet where the team’s performance over the past season was reviewed. ‘Lack of results beyond a certain level’ was cited as the mean reason behind the decision. Thus, the tradition of HI getting rid of high-profile coaches without warning continued.

In a stark contrast, their women counterpart started the year on a blazing note. They blanked a lowly Belarus 5-0 in a five-Test series and then finished at the top in the Women’s Hockey World League Round 2 in Canada. But the results were reversed in the next two tournaments. They suffered 0-5 whitewash at the hands of New Zealand in a Test series in May and then finished 8th at the Hockey World League Semi Final Johannesburg 2017. It also served as a qualifier for the 2018 World Cup and India failed to seal their berth. Mirroring their male counterparts, the women team also toured Europe where they produced mixed results – losing twice to a local Dutch women team but drawing and winning a game each against Belgium junior men’s team.

The hockey management was observing all this quietly from a distance. And after showing Oltmans the door, they surprisingly asked the women team coach Sjoerd Marijne to take over the men’s team in September. And Harendra Singh, who was the frontrunner for the job after guiding the junior team to world title, was given the charge of the women’s team.

The kind of shakeup isn’t a novelty to India hockey setup. Every such decision brings with it a host of controversies which eventually peter out into renewed hopes. And Marijne did no harm to those expectations.

Within just two months in charge, he instilled a change in style of play. Consistency became the keyword for the men’s team. In his first assignment, he led his charges to a gold medal at the Asia Cup in Dhaka. The team returned undefeated, laying hands on the title after 10 years. Harendra also began his tenure on a winning note. They also returned undefeated winning the title after 12 years. More importantly, by finishing at the top, they qualified for the world cup on merit.

The men’s team had one last assignment left and they defended their bronze medal at the Hockey World League Final in Odisha. It was a tournament that saw the worst and best of Indian hockey, leaving everyone puzzled why the team fails to maintain the consistency against top opponents.

Manpreet zealously defended the poor shows but even he knows the team is yet to match the level of the teams of the likes of Australia and Germany – a team that pushed them to their limits in the bronze medal match despite playing with just 11 fit players, no substitution and regular goalkeeper serving as a makeshift forward. While the year might have ended on a good note and Marjine has ‘results’ to show for in his first two attempts, the test of team’s progress will be for everyone to see in a packed 2018.

2017 must have served as the drawing board where the both the teams – men and women – would have identified their weaknesses and strengths. The fact that they played the top teams in high-intensity tournaments must have given them the requisite information ahead of the year when they have Commonwealth Games, Asiad, Champions Trophy and the all-important world cups in the space of 12 months.

While the Asia Cup triumph cannot alone be the yardstick to judge how far the women team has come from the low of Johannesburg, it certainly is a step in the right direction. The players have started exhibiting the confidence and aggression they so sorely missed during the disastrous Rio Olympics.
They pounded 28 goals in six games at the Asia Cup including a 10-0 thrashing of Singapore which is a proof enough of their new-found aggression. If Harendra is to be believed, the performance was a foundation for the upcoming challenges and he is confident the team to win at least two medals in 2018.
As team captain Rani Rampal recently told TOI during an interaction, the team’s ‘mindset’ has changed and they are ‘determined to prove that are good”. And that translated into a much improved and authoritative results. They will need more of that changed mindset and determination in 2018. 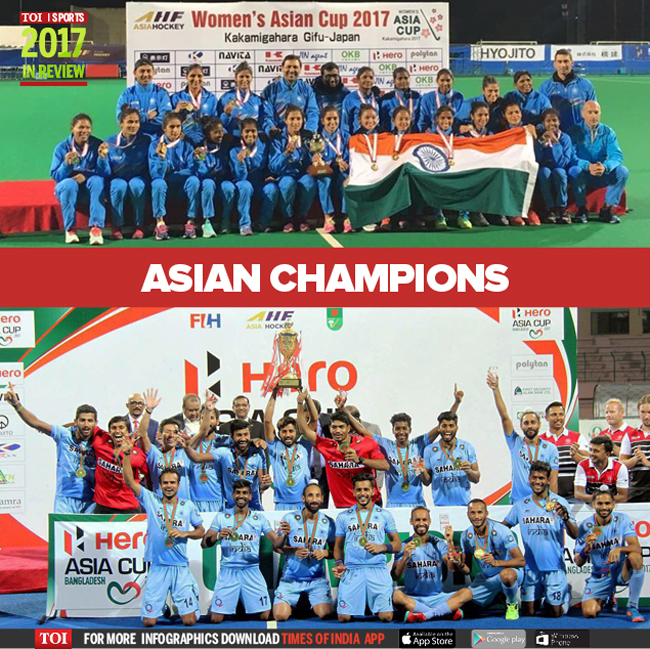