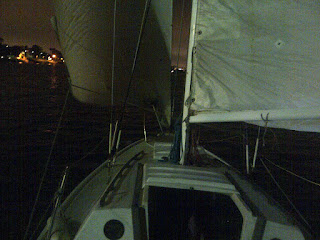 "It was in fact, a week or two - perhaps even a month after the horrific storm - that this lesson dawned on me. But its REALLY important and not one of those lessons you ever forget!!" ~Albie

Captain Brad begins our tale: "It all started more or less when my cell phone rang the other day. Rrrrring! Kinda like that, except right in the middle of something important. Not good timing, but what is this....the caller I.D. displaying the words “Son”. Oh, cool! A call from Braddock no less. “Hey Son.....What’s that? Did I remember that I promised to take you and some friends to Catalina for spring break..... Uhhhhh, oh yeah. I mean....of course not!”          As soon as I got off the phone the thought occurred to me: “No problema”. Since I live on a sailboat, all I had to do is get everyone on board by Friday, undo the dock lines, and start heading the vessel west, by south west, right? Of coarse there’s the small consideration that the engine needs to be fixed. Oh yeah, and the other small non-sequitorial factor that the rudder (for steering the ship) is not working either. And then there’s the minor issue that my wife Brigitte completely vetoed the whole idea, since she didn’t want our home to be missing for a few days, as she legitimately had a bunch of commitments going on that she could not change at the last minute, and unlike me, actually remembered that she had them. Then there’s the.... okay, I suppose you get the idea.
That is where things got seemingly really complicated. I mean a man does not ever go back on his word, right!? After all, that’s part of what makes us real men is our integrity with others, not to mention before God Almighty. But then again, I did forget to look at my calendar, and I’m sure my Son will understand. I better call him back with the bad news......wait a minute.....what am I saying, I can’t possibly let those guys down! What was I thinking (actually I guess technically, now you know what I was thinking).      But what else could I do.  And that’s when the thought occurred to me to call “Captain Albie”. If only I could convince my friend to drop everything and allow us to use his sailboat for a voyage across the channel at such last notice. That was this weekend! A brief phone call latter, and suddenly I felt the warm fuzzies all over. Not only did Albie not blackmail me (which he could have easily done at this juncture) but instead said that he was himself wanting to go to Catalina, and only needed such an excuse to go, such as my phone call for example.“Yeah!”

Well, there was certainly no time to waste. A lot of preparations needed to be done. More than the average Land lubber (lover) could ever imagine. We had to fix the outboard engine on the sailboat, make sure that it was running perfect for the expedition. Inspect and tune the rigging to minimise the chance of a de-masting (the mast falling off), scrub the bottom of the boat. Get the provisions, get extra fuel. Gather the correct paper charts. Do all the calculations for the navigation. Go over all the emergency gear like the flares and radios and extinguishers. Get extra type II life jackets for all personnel, and that was just the beginning of the list. And that’s about the time I decided to check the weather. Not tooooo bad, but it was forecast for a chance of rain late on Sunday. I called Captain Albie to notify him of this issue, and to see if he might want to postpone the trip for a sunnier weekend. Come to find out, he had made some really HUGE sacrifices to be able to take us at the last minute, and would definitely not be able to go the following weekend. I spoke to Braddock who in turn inquired with his friends Max and Louie. They all conveyed unanimously that a little rain was not reason at all to postpone an expedition.  Well, that was that!
It was starting to get fairly late by the time we had all convened at Marina Del Rey Harbor. We stowed all of our individual gear as best we could on to the trusty Columbia 22 foot sail boat. ”Canta Libre” was her name (which means to “Sing Free” in Spanish). Then after some last minute arrangements we again checked the weather broadcast from a repeater tower on Mount Wilson (with no significant change from before).

It was finally time to set the little ship free of her birth as we began to motor out towards the open ocean. In typical fashion, our schedule suddenly changed when the engine began to sputter, and then stopped all together. It started back up a couple of times, but was definitely being un-cooperative. Ironically, the little outboard had been nothing but both faithful and reliable up to this point, so it seemed inappropriate to be too upset about this small misfortune.
We had to decide if we should break out the tools and begin to fix the auxiliary while drifting, or to turn back to the slip to make repairs, and then of course there was option number three….. We were on a sailboat after all!  With the catabatic winds beginning to subside, we knew some offshore breezes were waiting for us not too far away out on the open ocean. After all, didn’t folks sail to the far ends of the earth without an engine for thousands of years? And so would we by golly...well....at least the 30 or so nautical miles to Catalina anyway's, God willing! As we were tacking out of the last hundred yards or so of Del Rey (“The King” in Spanish), little did we know that the true King of Kings and Lord of Lords was about to gift us with some of the most spectacular dolphin interaction just a few short hours later, but then again, I shouldn’t get ahead of the story, now should I.
We finally cleared the breakwater wall and got on our rhum line (straightest possible line of travel) towards the isthmus, bucking gently into the swells on a close reach..." ~Captain Brad


~Captain Albie: Did you notice a few things that we did right? Yes, we packed all the right things and we were careful to check the weather. Now comes the question...did you notice what we did wrong (and didn't mention)?

Well, in attempting to do the right thing we even checked the marine forecast before leaving. But what we didn't mention and what we did wrong was that we didn't check the marine outer water weather report! It was in this report that we may have got our first clue of a gale approaching Catalina on Sunday. It was in fact, a week or two - perhaps even a month after the horrific storm that this dawned on me. But its a REAL important lesson and one not ever to forget!!


Thanks for ALL your comments. They are most welcome! :-)