Telly Savalas was one of the biggest stars of the 20th century, gaining fame from dozens of television shows and films, as well as a string of records. His biggest claim to fame was, of course, his hit television show Kojak, in which he played a Greek American detective who had a thing for lollipops.

Here are nine fascinating facts about the late, great Telly Savalas that you might not know.

Savalas loved his Greek heritage, He contributed heavily to St. Sophia Greek Orthodox Church in Los Angeles and often participated in Greek American community events, including parades and fundraisers. Savalas spoke fluent Greek because English was forbidden in his family’s home growing up.

”I came from a tough neighborhood, he told People Magazine in a 1981 interview. “I used to be a ‘dirty Greek,’ but my father used to say to me, ‘When you grow up and realize what your heritage means, then they’ll need a permit to speak to you.’ He was right. I’m a proud Greek. I carry my Hellenism like a badge of merit.”

Both of Telly’s parents hailed from villages in Lakonia, near Sparta. His mother Christina left the village of Anogia when she was a child and his father, Nicholas left the tiny coastal fishing village of Gerakas and emigrated to America in the early 1900s.

The village of Gerakas where Telly’s father was born (Pappaspost)

Telly had a great connection to the region of his parents’ birth, arranging and paying to connect the village with the country’s electricity grid in the 1970s.

Telly Savalas was the godfather to a baby who would grow up to be another of Hollywood’s famous Greeks— Jennifer Aniston.

Baby Jennifer Aniston in her mom’s arms, with dad John in the background and a smiling godfather, Telly Savalas (Pappaspost)

Family stories have circulated in the press that as Nono Telly held baby Jennifer in the back seat of his Rolls Royce, Aniston threw up on Savalas’ black velvet dinner jacket. Savalas was a close family friend of Jennifer’s father, John Aniston.

Savalas wasn’t shy or humble. He loved appearing in magazines and spoke freely and openly about being famous.

In the 1970s he appeared on and in dozens of American and international magazines, including a 1974 edition of People Magazine, on which he appeared shirtless– considered scandalous at the time. 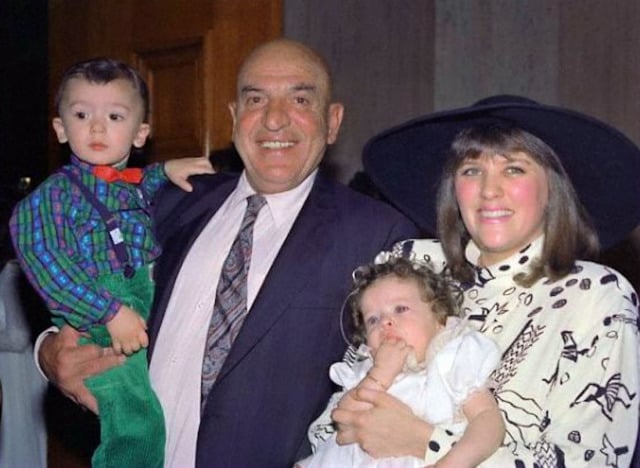 Savalas returned to Greece, and specifically to his mother’s village of Anogia in Lakonia, to baptize his son Nicholas. He actually delays the baptism seven years since he had been busy filming, but insisted the baptism take place in the same church where his grandmother was baptized two generations earlier.

6) Telly the Jack Of All Trades 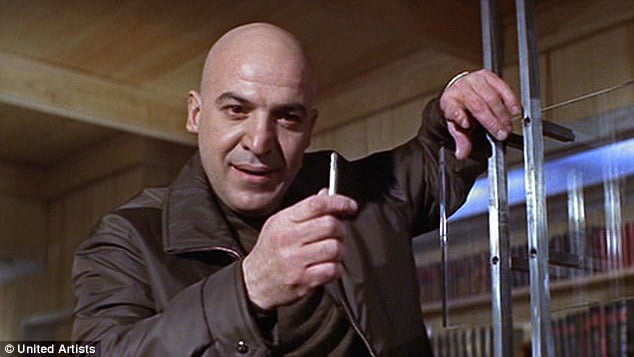 He wasn’t just an accomplished actor. Savalas held a degree in Psychology, was a world-class poker player who finished 21st at the 1992 World Series of Poker, and was a motorcycle racer and lifeguard.

As a singer, Savalas had numerous albums and some chart success. His version of Bread’s “If” reached #1 in the UK in 1975 and his version of Don Williams’ “Some Broken Hearts Never Mend” topped the charts in 1980.

He worked with composer and producer John Cacavas on many albums, including Telly (1974) and Who Loves Ya, Baby (1976).

Contrary to popular belief, Telly didn’t lose his hair. He shaved his head for his role as Pontius Pilate in The Greatest Story Ever Told (1965), and decided to remain shaved for the remainder of his life, becoming the most famous bald man on the planet and giving bald men everywhere, a badly-needed icon and sex symbol, making bald cool. Savalas famously said once that “everyone’s born bald.”

Telly Savalas was considered to be one of the most compassionate and friendly people in show business. He was credited with giving many young actors their first breaks in the business– just as Burt Lancaster gave him his first break.

The post 9 Fascinating Facts You Never Knew About The Late, Great Telly Savalas appeared first on Do You Remember?.

Back! SABC3's Presenter Search on 3: all the audition Dates

Living In Cyprus: Expats and Ex-EU

Mews: Is Your Pet Pawsitivly Part Of The Family?