If good King Wenceslas had looked down on the feast of Stephen today he'd probably have seen people eating Candy canes as as well as being Boxing Day it was also Candy Cane Day. I've tried them before and always found them to sweet. In preparation for today I bought one from the local grocery store.  I thought that it would be minty but it turned out to be pretty tasteless. If it was meant to have a flavour I think that they forgot  about it. I'm not a convert but hey, it's candy cane day so yay for flavourless sugar! 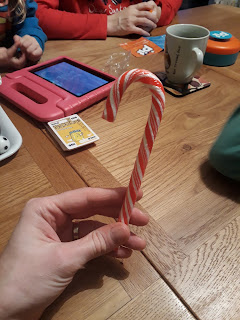 One of today's celebrations which I made a stab at was Whining Day.  This was invented in the 80s so that people would remember what they have whilst whining about what they don't. It's not just about whining about presents but about being tired and having had too much to eat. Right now my belly is bursting, I could use a good lie in and I've given up trying to hold in the stink. Although I can whine about it it's nice to know that I have lovely kids to tire me out and plenty of food to fill my plate. I did lose this afternoon's game of "pit" which is a bit like happy families so whined a good deal about that, but in a good way.
Today was also the day to write your thank you notes so I penned a note to my big brother and his new girlfriend. They bought some lovely bits and bobs for the kids so I wrote them a lovely letter in return. I don't remember the last time I wrote him a letter, I'm not sure that I've ever done it before to be honest.
It's odd thinking that I only have 5 days to go. I'm looking forward to having my evenings back.