Just weeks after Limpopo health department obtained a court interdict ordering Lethebo Rabalago of Mount Zion General Assembly and his church members to refrain from spraying or applying Doom on people, a baffling picture of another South African pastor feeding Dettol to his Congregants has emerged.

The Daily Sun reported that Prophet Rufus Phala of AK Spiritual Christian Church in Makgodu, Limpopo, made his congregants drink antiseptic liquid Dettol, saying they will be healed of their illnesses. 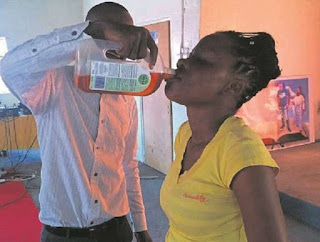 The prophet allegedly made his congregants drink the disinfectant during a church service on Sunday, December 5, 2016. Mysterious Phala said he decided to give his congregants Dettol because the liquid is harmless. He said God instructed him to feed Dettol to his congregants, and has been receiving heart-warming testimonies from those who got their healing. “I know Dettol is harmful, but God instructed me to use it. I was the first one to drink it,” he claimed. Prophet Rufus Phala said he knew Dettol is harmful  to the body but maintained that his own is rather a powerful healing liquid that sends away all manner of diseases and sickness from the body of his congregation.

Since the emergence of the shocking report, the social media has been abuzz with mixed reactions, with many calling on the government to intervene. A few weeks ago, self-styled pastor Lethebo Rabalago of Mount Zion General Assembly made headlines within and outside the country after he was captured on camera, spraying Doom insecticide on some members of his congregation while performing express miracles. According to the church, a congregant, and ulcer patient, Mrs Mitala instantly got her healing after the Prophet sprayed doom on her.


Meanwhile, South Africans have called on the government to intervene in this matter. Many believe the likes of Lethebo, who demonstrate weird power demonstrations – which includes but not limited to eating Omo detergent poses a great threat to the image of the country.