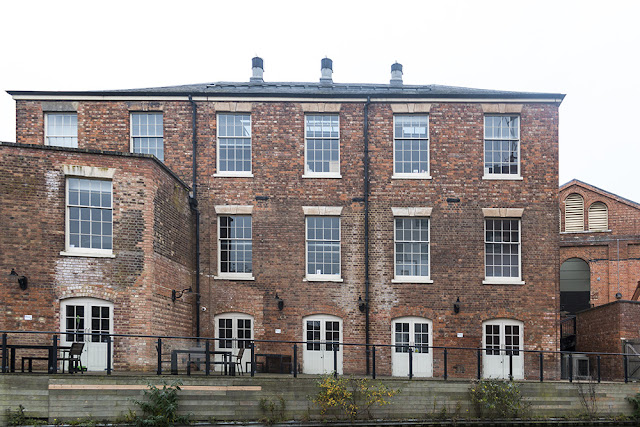 Getting outdoors doesn't always mean heading off in to the wilds of the British countryside, no matter how much I wish it did, sometimes, just being out in the fresher air of your local town or even city is enough to recharge the soul. Raising your lazy backside off the sofa and exploring the area around you can be enough to reinvigorate you for the days ahead. Today, as a family, we headed off to the local town of Wolverton and its downhill neighbour in search of a few well hidden geocaches.

Starting out in Wolverton, an old Victorian town built exclusively for the railway between London and Birmingham, and just down the road from us, we began our long walk around these two historic and interesting towns.
Everything started off well, our first find, hidden in a wall cavity of all places, was found in record time and with very little notice of us by "muggles", in fact even though it was sat opposite an evangelical church (formerly Wolverton Cinema) and a local pub, there was little footfall passing as we ducked into the bushes to search.

Things started to go downhill a little from here.

Our next cache was meant to be a quick pick one, if you are driving by Wolverton Tesco you can just pop in, however the road/carpark it was likely in was VERY busy today, and we didn't really want to risk the kids on the pavement-less road edge, so we decided to skip it.
Next we headed to Wolverton station and another "quick" find, after about 20 minutes looking suspicious hanging about below CCTV cameras and around the bins we gave up, deciding cutting our losses was easier than risking arrest for loitering, or worse!
Crossing the busy road we headed off downhill into New Bradwell.
Heading towards the allotments, we ducked into the "tall Trees" looking resplendent decked out in the browns and reds of autumn; As we crunched and kicked through crackling, sulphur coloured leaves, littering the floor, we began yet another fruitless search. No matter how hard we looked today (see photo below of Tubs deep in the brambles) we couldn't see for looking when it came to caches today.

Getting desperate now for a little success we wandered on through New Bradwell heading past the war memorial clock tower, in all its 1960's glory, it does stand out as odd in this town made up of Victorian terraces, and heading for the church yard and a multi-cache, something we have had good successes with in the past.
We quickly located the clues for the final location, but rather than head straight there popped to the local Co-op for a bite of lunch.
Having sated our appetites sat by the local swings and roundabouts of a local park, we once again dived into the caching and soon found ourselves deep in the surrounding bushes, caught between park and river and had the cache in hand.

Leaving the park we were confronted by a rather large and loose tan coloured dog, heckles up, teeth bared the beast barked at us from down the road before rapidly approaching us. A break in traffic on the busy through road allowed us to cross sides before the dog arrived, but rather than just rush off and leave the kids of the park to have to face such a large dog alone we stayed over the road keeping an eye whilst phoning the local police.
Sadly with the dog not obviously being a danger (it wasn't hugely aggressive once we were over the road and didn't look too much like it would attack) we were passed onto the dog wardens however in probably the most ridiculous situation I have ever heard I was informed if the dog was loose and not cornered or being held by someone they couldn't send anyone! Fortunately while I was picking my jaw up off the floor at this another lady recognised the dog as being a "guard dog" for a local garage (the dog was in front of the closed yard when it first barked at us) and called the owners. by the time they arrived the dog had found its way back into their yard, thankfully no-one was hurt but it could have been so much worse with a kids park so close!

We headed back through New Bradwell and onto the Grand Union Canal and our route back home.
At the edge of New Bradwell there stands an old windmill, built in 1803, by Samuel Holman, to mill the locally produce grain ready to be dispatched to London down the Grand Junction Canal (now known as the Grand Union), it is believed to have ceased operation in 1876, the last miller being Robert Saxby, it has been restored (1970 - 1990) by Milton Keynes council and in 2014 was once again made operational (through the use of an electric motor).

Of course we learned this today, thanks to the volunteers having the windmill open today, we even managed to buy a little flower milled from the old structure, a nice strong flour that I hope will make excellent yorkshires!
We had one last cache to locate on our long walk back along the canal, and thankfully this was another success story, we quickly located the largish tub and not only signed off on over 40 geocaches in total but also found a new home for the trackable owl we had collected on a previous hunt.

Our geocaching may have been done for the day but our walk was not over there were still some 2 km between our current position and the home end of the canal so we set off once more, walking along side the slow moving, green waters of the canal, we headed around the back of Wolverton and passed the historical old railway buildings, once home to the queens train and building works for many a locomotive, now lying in semi ruin, broken windows and crumbling bricks.

Our final tally was 3 Geocaches found, 2 Did Not Finds and 1 skipped due to traffic, some 13 kilometres walked and a good deal of fun and chat had by us all. Not quite as successful as our trip the Cosgrove area of the canal but still any day spent outside is better than one spent on the sofa.
Don't forget to check out our other Geocaching posts, via the menu above.
One Final Photo
My daughter stole my hat today and I couldn't resist showing this sassy photo of her in it.

If you enjoyed this post, or found it useful, then please do share it with your friends using the links below

Please feel free to leave me a comment, I really appreciate the interaction and will reply as soon as I can. I apologise for any issues with posting comments, but sometimes Google's blogger platform plays up. ALL comments are moderated for SPAM, so please don't bother if the comment is unrelated to the post it will likely be deleted.

Healthy Mother, Healthy Baby: 4 Ways that You Can Safely Exercise while Pregnant