Oh – I’m so glad you’re back! The Brother Luminaire Innov-is XP1 feature I covered yesterday, scanning the “Snowman” sticker was so easy – you gotta love it. It’s perfect for getting the design exactly where you want it, such as a chest crest on a t-shirt, or a design smack dab in the middle of a quilt block.

But…(yeah, there’s always a but, isn’t there?) what if I kinda want to decide as I go? Like maybe I want to embroider a butterfly design on fabric printed with flowers, and I want the butterfly just perfectly perched on the flower? Then it can be more of an exercise in trial-and-error – and who has time for that?

Today I’m going to show you another feature that takes away the guesswork in design placement: the built-in scanner. I love the scanner function because it’s also easy, and totally WYSIWYG (What You See Is What You Get). From my students, I’m constantly hearing “I’m a visual learner”. Most of us are, and being able to truly preview the end result simplifies any project. That’s where the scanner truly excels.

So, I do have a little home decor project in mind to use the scanner. But truly, this tool is so easy, I felt guilty and decided to sneak an extra little goody in – the built-in border function in the Luminaire. It’s a quick ‘n easy project, so I hope you’ll grab some materials and follow along with me. 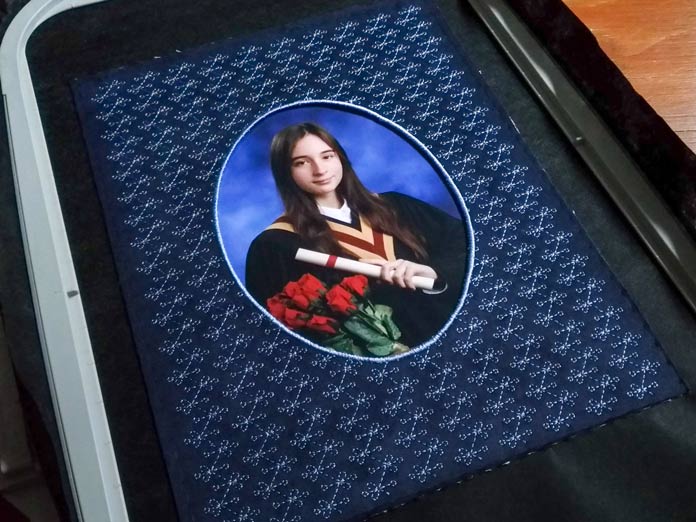 An overview of materials required for this little project…

So now, please bear with me. I’m going to build this project bit-by-bit, so no peeking at the end result – that would just be cheating, LOL.

Here’s the quick prep: Thread up the machine; hoop the stabilizer and place the fabric on top, centered in the hoop. (set aside the WSS for a later step). Now lay the picture over top of the fabric. You can tape the corners, if you like, but I didn’t bother. Its location isn’t really important, but it should be straight in the frame. And don’t worry, I won’t Stitch on the picture – I’m just trying it on for size, so to speak. 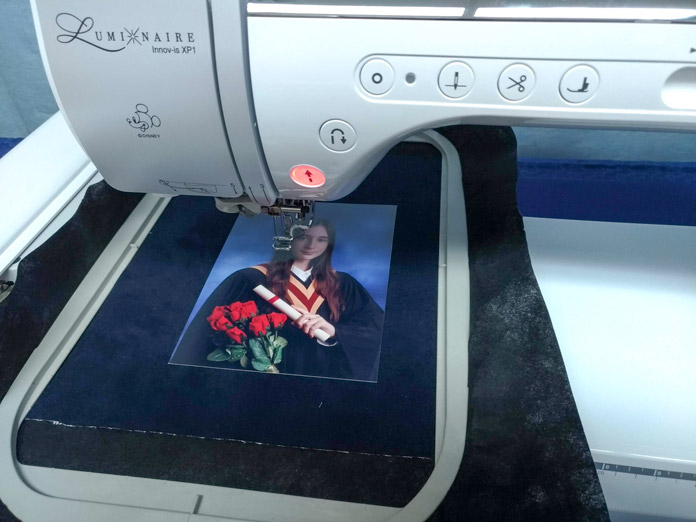 Lay the photo on the fabric, anywhere in the hoop, but keep it straight!

Next choose Category 4 (Frames), and from the ten available frame shapes, choose the Oval (4). Assign it the running stitch pattern (#10) and Set it. 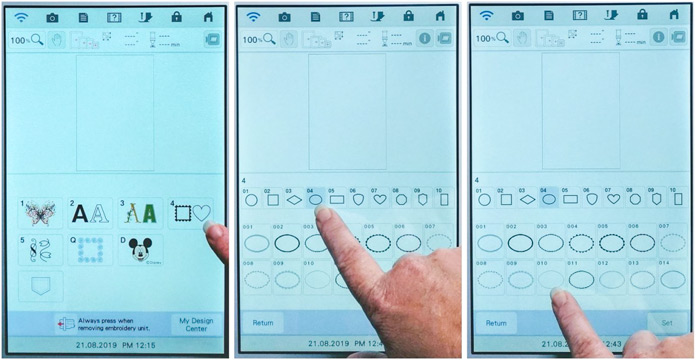 Now for the second magic trick (the first was snowman magic, yesterday). Touch the camera icon near the top right of the screen to open the scanner options, and touch Scan (OK the frame-will-move message). When it’s done, I see an image of the fabric and picture on my machine screen, overlaid by the oval I retrieved. I can now remove the picture from the hoop, and close the scanner window. 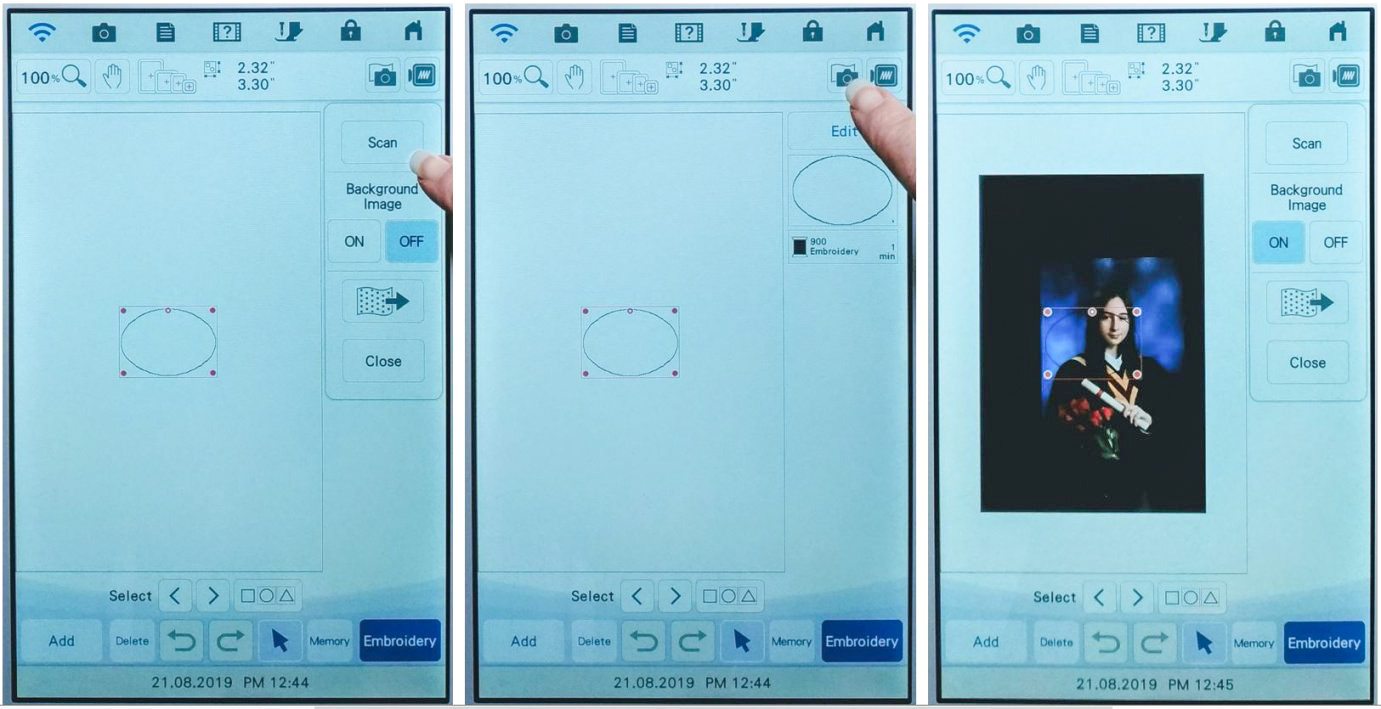 The scanner function is easy and gratifying – the display shows exactly what’s in the hoop – and where!

This is where the “visuals” come in: now I can reference the photo to create a perfectly sized oval to frame the photo subject. And not that it’s necessary, but I like to change the thread color of the oval to a contrasting one for easier visibility. Drag the oval over the picture image, touch the size icon and adjust the dimensions to suit the picture.

Once that’s done (be sure to keep it slightly smaller than the picture), touch the Applique tool, set the distance to 0, and touch OK. I now have an applique sized perfectly for the photo. Ungroup the set, move the applique to center and delete the original oval shape. Save the applique to the machine’s memory. (If you joined me playing with Luminaire last month, these should be familiar steps.) 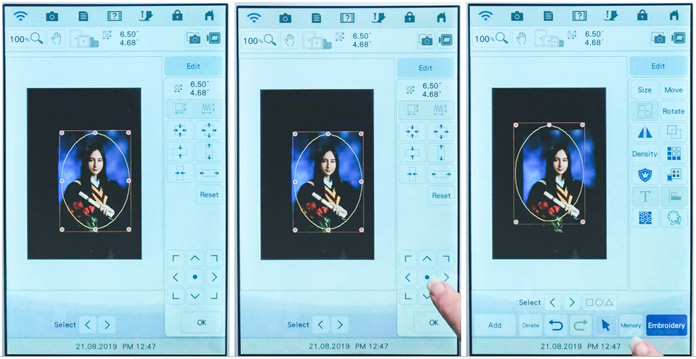 The scanned image provides an exact template over which I can customize the design.

Now for the next part: touch Home, and OK to cancel the current pattern. From the embroidery menu, select Category 5, and then Tab 3 (Utility Embroidery Patterns). Browse through the selection and choose one that appeals to you – I kinda like #36 – and Set it. 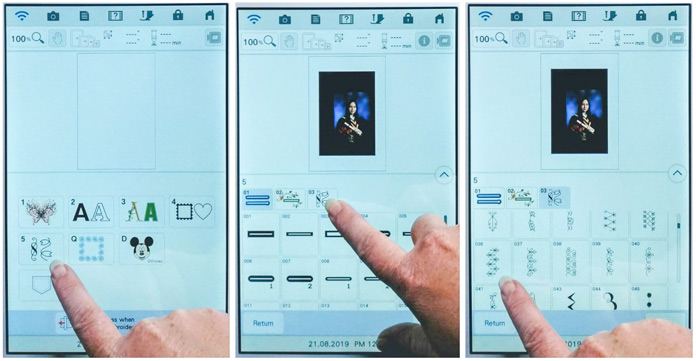 There are a ton of decorative stitches to choose from!

See the last scan I did is still on screen; since I no longer need it, touch the scanner button and turn the image off. Close that and touch the Edit button, and then the Border Layout function. This is such a cool option for arranging repetitive embroidery elements, and not only from this design category, but pretty much any embroidery design. I lu-u-u-v this toy! 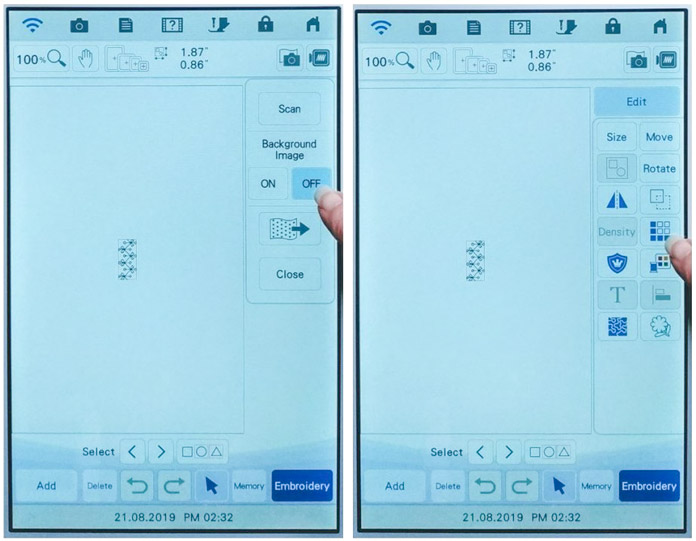 Turn off the image and open the Border function options.

Now, the Border Layout tool can be used to create design repeats for “endless embroidery”, which is particularly effective when used with one of Brother’s border hoops, but I especially like using it to subtly texturize fabric, which is just what I’ll  do. My goal is to fill an 8″ x 10″ area. I’ll be adding repeats downwards, and towards the right, so start by dragging the design to the upper left of the embroidery area in order to make room.

By default, the vertical layout is selected; so I’ll begin with that. Touch the “add to bottom” repeats until there’s just more than 10″ worth (I can see the overall design size along the top of the screen). For my pattern, I added five more. Switch to horizontal addition and add to the right, to fill at least 8″. I used a total of ten. I can also fine-tune the spacing, and I spaced mine just a touch closer to minimize the stripy effect. 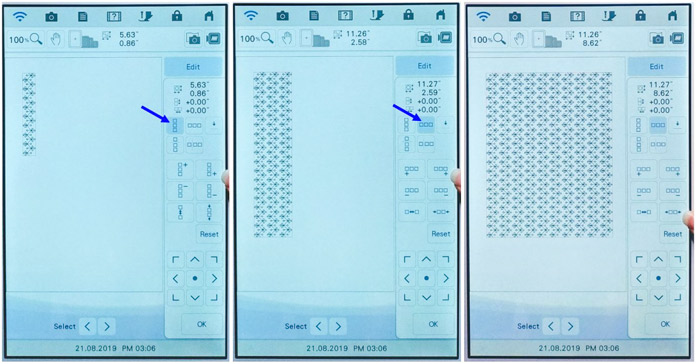 Before leaving the border options screen, center the whole kit and caboodle in the frame and touch OK. Advance to the Embroidery screen, touch Layout and add a baste stitch; this will tack the fabric down to the stabilizer, since it isn’t secured by the hoop. And now it’s time to start stitching. Stitch the baste, which is automatically sequenced to the beginning, and then start on the fill. When I did this, only one pattern repeat stitched before the Luminaire stopped and prompted me to change color. To force it to stitch right on through, touch Layout again and touch the “Uninterrupted Embroidery Key” (that mouthful is straight out of the book). This tells the machine to stitch straight on through without stopping for color changes – a real timesaver! 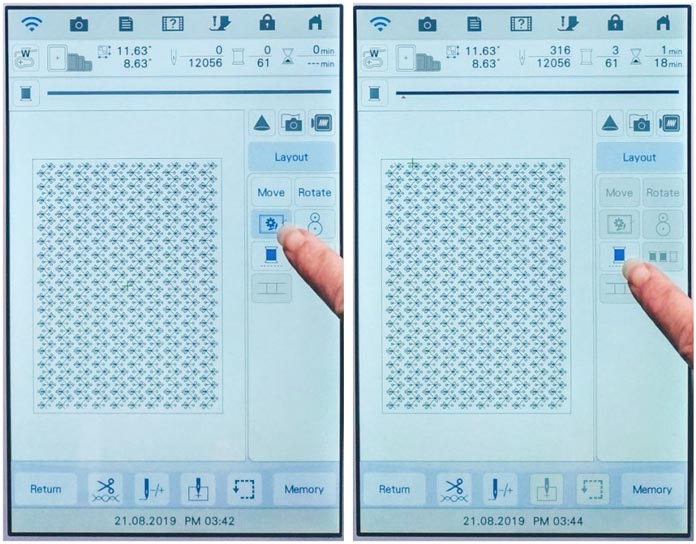 Wait – what about the oval applique I made? Well… applique needs attention, and if I had included that design, turning on Uninterruped Embroidery would have stitched right on through that one, too. So, now that the background fill is finished stitching, I’ll delete it and retrieve the oval from the Luminaire‘s memory. Touch Home (OK the cancel request) and touch the pocket icon; the oval applique is the most recent. Go ahead and Set it; advance right to the Embroidery screen.

Stitch the first step of the applique; this is the cut line. Once it’s stitched, remove the hoop from the machine (NOT the fabric from the hoop), and lay it flat on a self-healing cutting mat. I used a small rotary cutter to carefully cut out the middle of the oval, a little more than 1/16” from the stitching line. 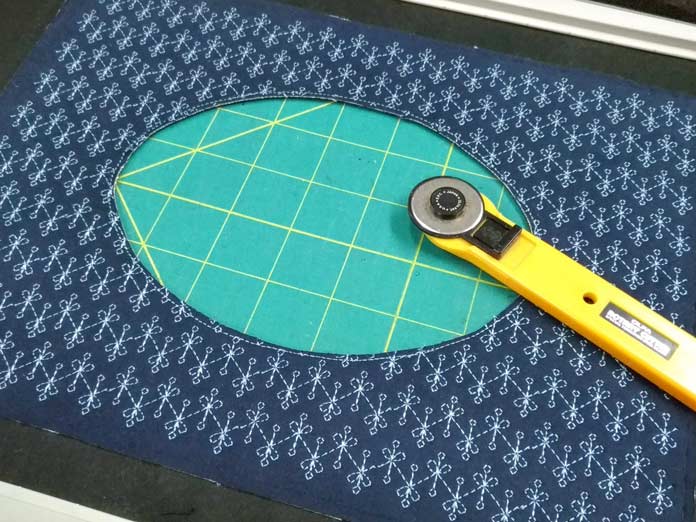 Cut out the center of the oval, about a generous 1/16″ from the stitching line.

Return the hoop to the machine, patch the hole with water-soluble stabilizer (feel free to tape the edges in place), and stitch the next step to secure it. Then, start the third and final stage, the covering stitch. It’ll begin with a loose zigzag; watch it stitch to make sure it’s trimmed closely enough. The zigzag should just nicely enclose the raw, cut edge. When the underlay zigzag is done, it’ll immediately begin the covering stitch, so if I need to stop the machine and adjust my trimming, catch it just before the covering stitch starts..

When it’s done stitching, remove it from the machine and gently tear away all of the water-soluble stabilizer. Unhoop the fabric and trim it down to 8″ wide x 10″ high, being sure to keep the oval centered. Oh, who am I kidding – I’ll trim it down later; right now I want to see my photo mat (yes, that’s what I just made) on my photo. What do you think? All it needs now is the frame to put it in…

Now that the project is done, it’s confession time. The most observant of you may have noticed I stitched this with light blue thread, but my initial supplies picture showed a navy thread. Well, I was trying for a tone-on-tone effect, and my match was a little too close – you couldn’t even see the stitching at all. So I ripped it out (lucky I had only sewn one motif), and restitched with the lighter blue. Does this ever happen to you? I had a couple of other little set-backs along the way which initiated some “design changes”, but overall, I’m pleased with the result. And did you like the “twist” – the applique wasn’t appliqued? Had you known the steps for basic applique and cutwork are the same? Cool, huh?

There’s another cool feature to play with tomorrow, so I hope you’ll be back for another play-date with me so we can explore yet another wonderful innovation in design positioning: the Luminaire‘s projector.

This is part 2 of 5 in this series.
Go back to part 1: Automatic design positioning on the Brother Luminaire Innov-is XP1

Go to part 3: A wonderful innovation in design positioning: the Luminaire projector

The post Design positioning by scanning with the Brother Luminaire appeared first on QUILTsocial.