The PFAFF quilt expression 720 and its spectacular built-in stitches

The weather is nice and road trips are beckoning – or maybe just a quick visit to a sewing friend’s house. In reality, as a quilter, you can never have too many tote bags, right?! This week I’m using the Stitches on the Pfaff Quilt Expression 720 to make a simple pieced tote spectacular.

In the last post, I started to make the front panel of the bag, adding tapered stitches to a large shoo-fly block using the built-in Tapered Program. In this post, I’ll continue working on creating the front panel by making some more blocks and adding even more stitches! 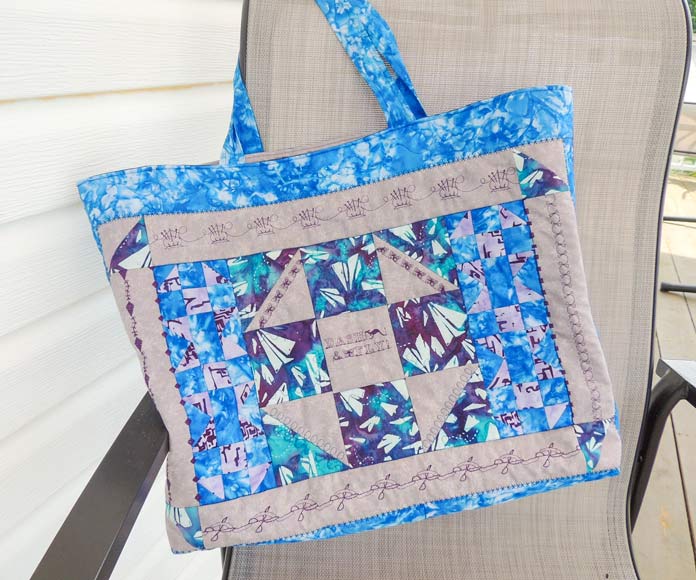 There are some more shoo-fly blocks to make for the front panel. Instead of making the blocks individually, I decided to make them as two long units which changed how to construct them. The three simple units below will easily make these side units for the front panel. 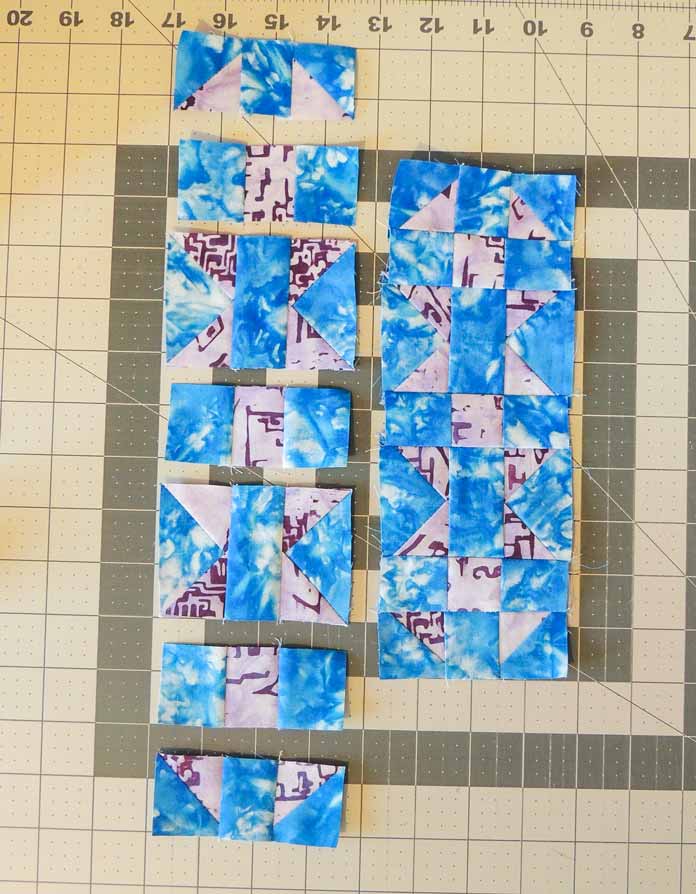 To complete this unit, sew one 1½” x 2½” blue rectangle vertically between two of the flying geese units with the background light purple towards the middle. Press the seams to the blue rectangle. 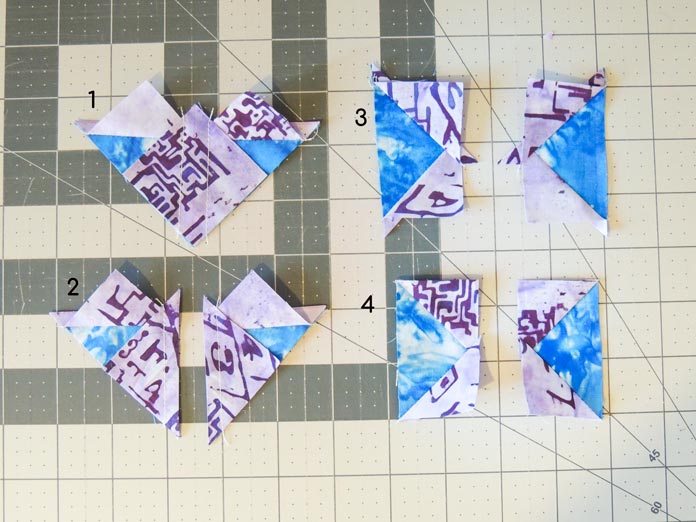 Steps to follow to cut and trim set of flying geese.

To complete this unit, sew one blue 1½″ square between two of the HSTs with the light purple right angle towards the blue square. Press the seams to the HSTs.

Refer to the photo below to layout and assemble the small shoo-fly block units. I love how using the IDT system with the OA presser foot helps me sew even these small hsts together into blocks and keep my points!

Sew an end row to a middle row unit then to a geese unit. Press each seam to the row beneath.

Then sew a middle row onto this unit, followed by another geese unit, then middle row, then end unit. Continue to press each seam to the one beneath it.

Repeat with remaining units to create a second column of small shoo-fly units. 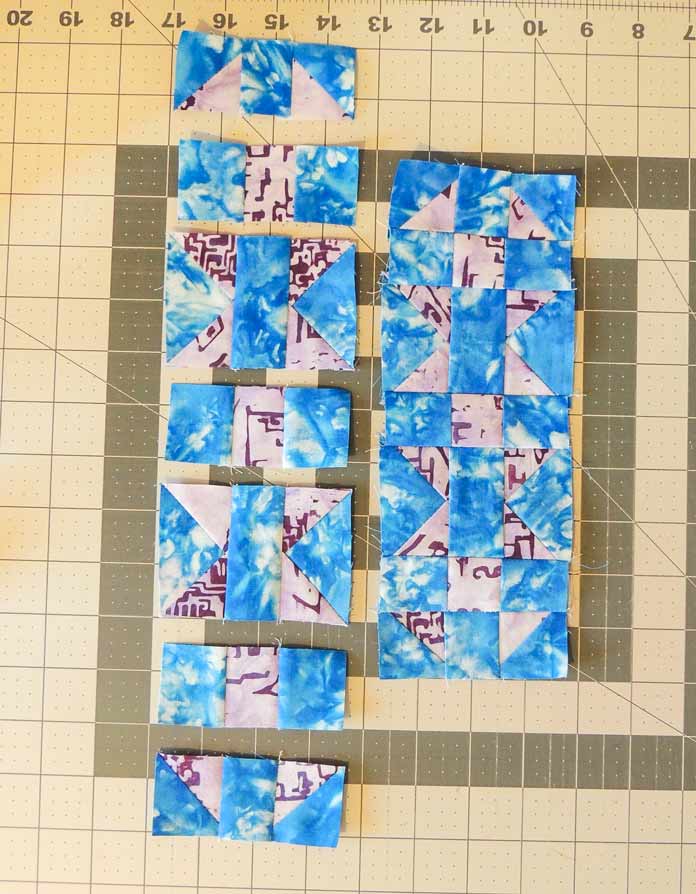 Now it’s time to add some spectacular stitches to the gray borders before assembling the front panel.

Cut stabilizer panel of 12″ x 15½″ then subcut into 4 strips.
Put stabilizer beneath each grey border strip and add decorative stitches.

You can see below why it’s important to try out different stabilizers before stitching on your project. I had planned to add all of my stitches after assembly and simply using batting. Below you can see the scissors decorative stitch on the batting I used: 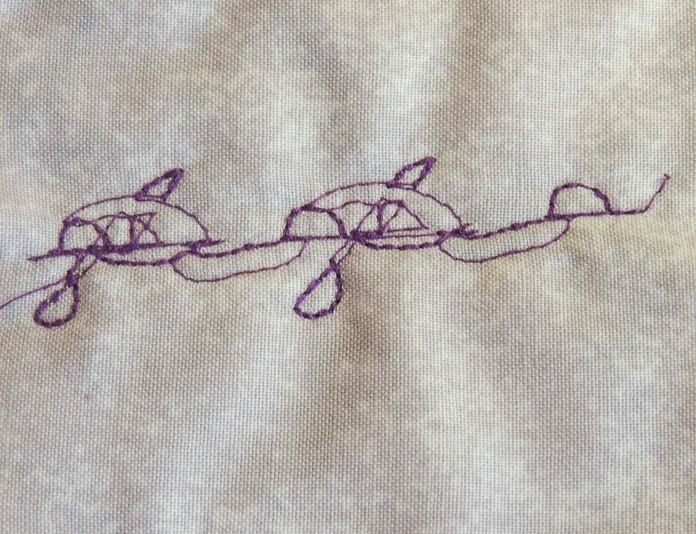 Here’s the same stitch but on stabilizer:

Obviously, I was much happier with the results using stabilizer and decided to add the stitching to my gray border fabrics before sewing them to the project. I cut the borders wider than I needed and trimmed each to 2½″ when I was done.

Two of the stitches need to look good vertically and two horizontally. It wasn’t a problem to find stitches that I liked and that fit with my ‘dash and fly’ and sewing theme. 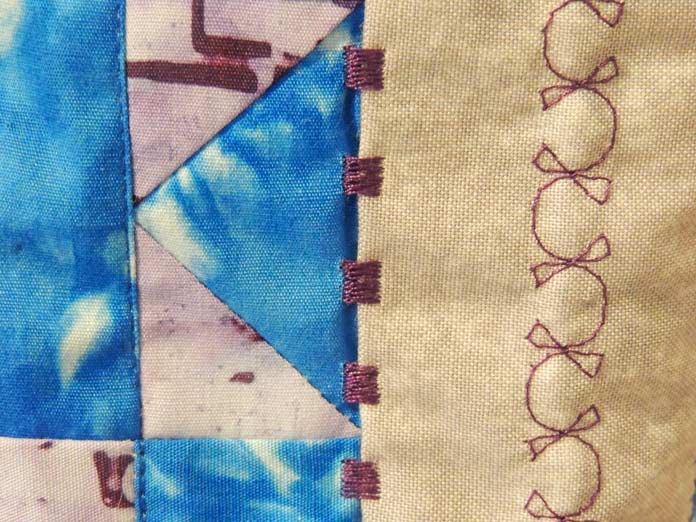 Use the Sequence program

Before joining the shoo-fly units together I decided I really did need to add something to the middle of the large shoo-fly block. I ended up using the Sequencing program to stitch my name on the bag – Dash and Fly – plus I added a hopping kangaroo and another butterfly.

The stitching is made up of two separate sequences which were easy to line up using the presser foot; I simply placed the edge of the foot directly under the first line of stitching to stitch out the second line directly beneath it. Using the Sequence program is even easier: it is accessed from the Color Touch Screen by pressing its icon which has a capital A with a zigzag beside it. The screen changes to a teal color with a blank area where the selected stitches will go. From here you can select a font to type out words and symbols; I like to use the included stylus to accurately and quickly tap the screen to select my letters. You can also add a stitch (like the kangaroo) and insert thread snip instructions or press the ‘stop’ icon to stop the sequence from stitching again. 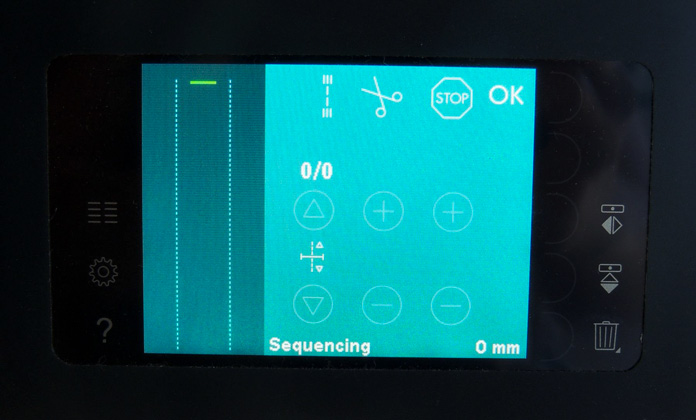 I did a practice run of my two lines of sequencing and decided to add an exclamation mark to my second line. I saved my second line in the personal menu so I could use it again – I forgot to save my first line, but I was able to sequence it again quickly.

Then it was a matter of adding stabilizer to the back of the middle gray square on the shoo-fly and stitching out the first line. Next, I went into the stitches menu and selected my saved sequence and stitched it out. 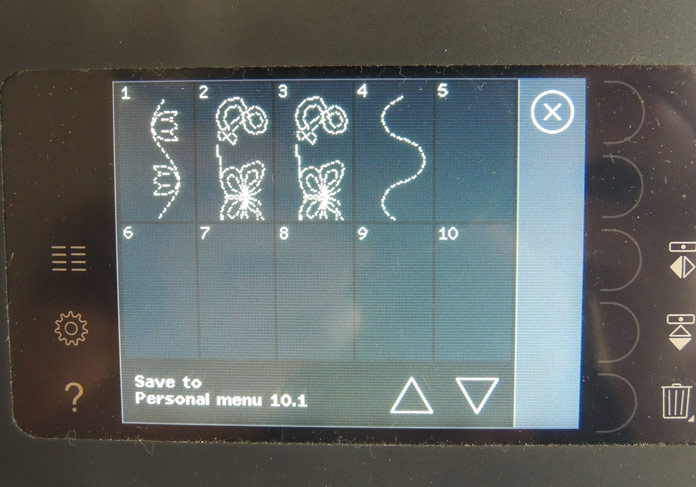 Now it’s ready to be sewn to the rest of the front panel! 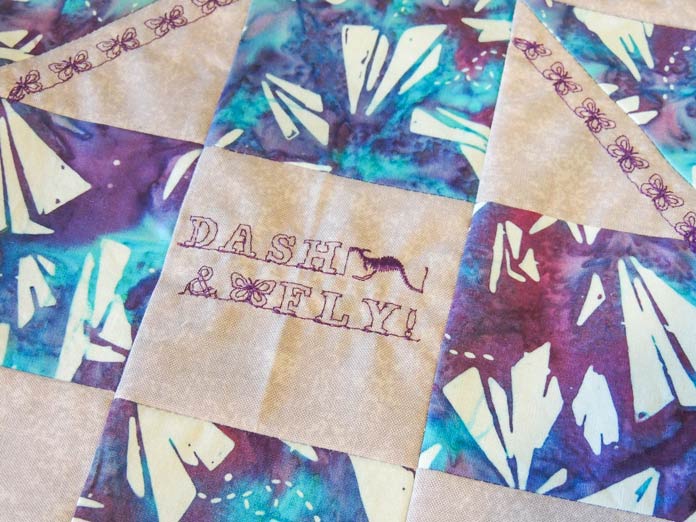 Sew each small-shoofly block column unit to a side of the middle shoo-fly block, pressing the seams to the middle.

Make two more sets of half square triangles before we can add the top and bottom gray borders.

Use the two background print and two gray 3″ squares to make a total of 4 HSTs. 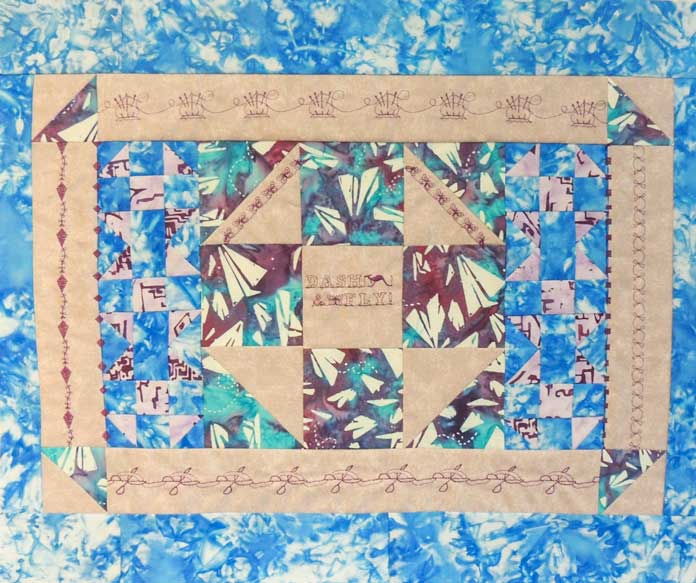 The front of the tote bag is now ready – only one more side to go! It takes a bit more planning to add decorative stitches before assembling the pieces, but I love the results. The extra layer of design created by combining the stitches from the PFAFF quilt expression 720 is all mine! I’m excited to keep going. Join me again tomorrow for more spectacular stitching.

This is part 3 of 5 in this series.
Go back to part 2: PFAFF quilt expression 720 makes tapered stitches out of built-in stitches

The post The PFAFF quilt expression 720 and its spectacular built-in stitches appeared first on QUILTsocial.

The PFAFF quilt expression 720 and its spectacular built-in stitches