Polynomials and Curve Fitting in MATLAB 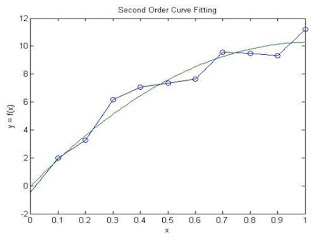 Polynomials and Curve Fitting in MATLAB from Shameer Ahmed Koya

Curve fitting is the process of adjusting a mathematical function so that it lays as closely as possible to a set of data points. MATLAB provides a number of ways to fit a curve to a set of measured data. One of these methods uses the “least squares” curve fit. This technique minimizes the squared errors between the curve and the set of measured data. The function polyfit solves the least squares polynomial curve fitting problem.


This post first appeared on Electrical Engineering Tutorial, please read the originial post: here
People also like
How to Take Proper Care of Your Teeth
How to Get a Phone Number of Sweden for Calls?
Shinnecock Indian Nation To Host Cannabis Operation Little Beach Harvest's Groundbreaking Ceremony
Painting with Acrylics | Do I need to prime my canvas?
18 Trendy Salt and Pepper Hairstyles for Men: Ideas to Try
64 Awesome Things to Do in Costa Rica, Where to Stay, Know Before You Go
Hip Hop Bling – Gold Grillz
Should the ends justify the means with Donald Trump?

Polynomials and Curve Fitting in MATLAB