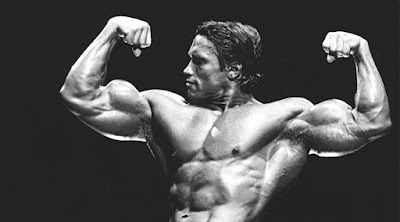 As a former Mr. Universe and seven-time Mr. Olympia title holder, Arnold Schwarzenegger's gym technique is nothing short of excellent — and at the age of 72, he can still lift with the best of them. So he gets pretty irate when he sees people snoozing through their own workouts. Speaking to LADBible while promoting Terminator: Dark Fate, Arnold described himself as a "fanatic" when it comes to cultivating the proper technique, and revealed the bad habits and lazy form that he absolutely hates to see in the gym.

"When they do half a rep, or when they do chin-ups and they just go half way up," he said. "Or if they do a pull-down exercise or curls and they just sit there and do half a curl. You have to concentrate when you do everything. You've got to feel the bicep, you've got to squeeze it and do it the right way because then that rep really has an effect, otherwise it doesn't have any effect and therefore you're wasting your time."

best fruits for weight loss - best fr…
Art Has a Money Laundering Problem. N…
Five Things You Don’t Need To Get Hea…
A Run Down of Ashton Kutcher Brazilia…
Here’s Our First Unofficial Look at T…
"It drives me nuts when I see them in the gym," he continued. "I've been seeing this stuff for 50 years because I was always a fanatic about doing the movement the right way. Don't cheat on yourself, just do the exercise the right way. Even if you have a trainer and they don't look, you should still do it the right way. Those are the kind of things I see in the gym."
On some occasions, his secondhand cringe is so powerful that he feels compelled to correct people. "Sometimes I feel comfortable enough to walk over to someone and just say, 'I think you would be better off if you did full reps and if you do them the proper way,'" he said.
It would be a pretty surreal experience if you were just going about your workout and Arnold goddamn Schwarzenegger came over to offer you advice. If you're not lucky enough to have a membership at Arnie's gym, though, don't worry: he stopped by Men's Health recently to give us his six best tips for building muscle.


This post first appeared on Fitnezz.net, please read the originial post: here
People also like
best fruits for weight loss - best fruits to eat
Art Has a Money Laundering Problem. NFTs Could Make It Worse
Five Things You Don’t Need To Get Healthy and Stay Fit
A Run Down of Ashton Kutcher Brazilian Jiu Jitsu Journey
Here’s Our First Unofficial Look at The OnePlus Watch
My Powerful Home Workout For Arms (Explode Them Now!!!)
ElCoach Releases 2020 Numbers- DB Exclusive
30-Day Fitness Challenge Ideas for Busy Moms
Things You Should Stop Worrying About in Bed
Batman vs The Predator I An fine example of how to make a crossover
Summer Amazon Favorites
Best Coffee Beans – Everything You Need to Know
इसे खाकर तो देखो टाॅप करोगे |Perfect Diet Plan For Student |Healthy Meal for study |Healthy eating