The ancient practice of Smudging and why you should do it 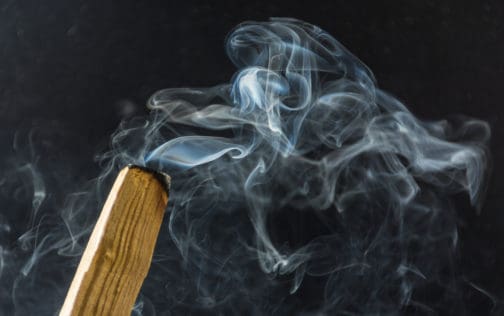 Smudging has been around for centuries and is based on the Native American cleansing practice, also known as The Sacred Smoke Bowl Blessing. This ritual is performed to remove negativity or negative Energy from the space, person, or object. The name we know it more commonly by is Smudging.

This practice is used by many other cultures, and all practice their own version of this cleansing practice. In the sense of cleansing energy, we see it as a way to cleanse or remove old, stagnant, or negative energy to higher more positive energy.

Sage is a member of the mint family. White Sage is what is commonly used for smudging and what you’ll find in most store-bought bundles. What you’re burning is a dried bundle of sage. These are easy to make if you grow your own sage or other herbs.

Other Common herbs to Smudge

Palo Santo is my favorite to burn, but I don’t use it as much as sage. I find Palo Santo, which smells amazing, not strong enough to cleanse the space, but I do use it when there is subtle energy that needs cleansing.

Other than Palo Santo and Sage, I haven’t used the others for smudging per se but have used the essential oils like Frankincense and Lavender for additional benefits.

Why do you use Sage?

One of the benefits is that the smoke from the sage can reduce airborne bacteria by 94%! That is just an awesome byproduct of cleansing your space from a spiritual aspect to being a disinfectant.

As a spiritual person, there is nothing more enjoyable at its purest pleasure than smudging myself and my home. May seem odd to you, right? But have you tried it yourself?

The first time I started smudging, my home was a few years back when I started to get into all the spiritual stuff. However, some people probably didn’t experience the same thing I did, which is ok, but what I felt was a noticeable change in my spirit.

What was that noticeable change I felt?

Well, it was the immediate release of a weight that was on my shoulder. No, it’s not stress. It was different in the feeling of being energy heavy. Does that make sense to you? If not, let me try again.

It was a physical weight that could not be seen but was weighing on my whole being. Different than stressed shoulders that you feel physically in the muscle. This sat on top of my spirit for lack of a better term. In the space above my physical body.

Even now, as I write this after taking my dog on a walk, I came back with a feeling of something dark standing right behind me. I felt this after I walked by someone on the way home. I can only explain that this was their energy that attached itself to me as I walked by. As a claircognizant empath, this happens frequently. You can read about being an Empath here and how to protect yourself from Energy Vampires here.

The feeling of having a dark energy rest behind and over your right shoulder, specifically right now, is hard to ignore. I recognize what it is and immediately cleanse myself by smudging with sage.

Yes, it does. I’m not sure if everyone can feel the immediate lifting of the negative energy, as I can, but it does work. You don’t just use it on yourself or others either. You have the option to use it on whatever you think needs to be cleansed.

What does it mean to smudge your house?

Again, you can smudge any space or anything you would like. Some to include a new house, your current home, new or used car, item or object that you bought, during meditation, after a series of negative things happening. The options are endless. 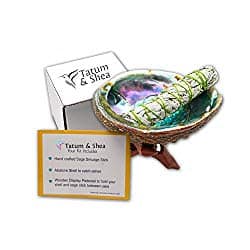 How do you smudge your house?

Then open windows in several of the rooms that you are smudging to allow negative energy to leave the space. Not to mention to help the smoke leave the space. Sage has a powerful and distinct smell that may be overpowering for some.

Next, you’ll light the sage bundle, gently blow out the flame and let the embers burn. Smoke will begin flowing up. You can then place the sage in a fireproof bowl or abalone shell. And allow the sage to emanate smoke.

You’ll start wafting the smoke with your hand or feather if you get a kit that has one like this one, and begin saying your prayer. More on the prayer in a minute. You’ll start by going clockwise to bring in energy or counter-clockwise to remove energy in your home and from room to room while smudging. I prefer counter-clockwise and go to each corner of the room while wafting the smoke.

Go to every room in your house, even bathrooms, closets, laundry rooms. I always make sure to do my closet and my husbands’ suits and travel bags to remove any energy he may have picked up while traveling. I make an extra pass over my daughter’s bed if she starts having nightmares. It makes us both feel better.

Say a blessing or prayer to cleanse the energy while you are walking through the house and room to room. I have found this to be a very personal thing that best suits you and your intentions. I have read many variations of other people’s prayer and found them not to be – me. It was someone else’s prayer, and that doesn’t feel right to me.

So I urge you to find your own prayer that resonates with you and recite this while smudging. I pulled different pieces of prayers and put them together and made it my own. Then I added my spin to it. There is no wrong way.

Mine goes something like this, but I change it according to what is going on in our home. I prefer shorter prayers, as it’s easier for me to remember.

Bless our home with peace, prosperity, and positivity. Remove all negativity and low lying energy and return it to sender.

I also state the following when blessing my front door and other entrance doors, this is just what works for me. You don’t have to do this. I do this to keep ill-intentioned people and/or drama out of my home. I can attest it works.

Bless our home with peace, prosperity, and positivity. Remove all negativity and low lying energy. Let no one with any ill will enter our home.

For added good measure and because the first time it happened naturally, I made the sign of the cross while smudging my front door and reciting the above prayer.

We’re done smudging the home, and now its time to put out the burning sage. You can stamp out the smudge stick in the bowl or shell, place it in sand or allow it to burn out. But only allow it to burn out if you’re watching it and ensure it burns out.

If you have little kids running around like me, its best to put it out and store it up high. I leave the smudge stick in the bowl and ensure it is out before putting it away.

You may not be able to use an actual burning sage bundle and have the smoke in some spaces such as offices and other public places.

I too ran into this problem in my office at work.  I smudged the whole office as the energy in the office was always heavy and negative.  You do your best to work in the environment and to protect me from this energy.

So what did I use as burning a candle or open flames is against fire code?  You can use a smudging spray. I recommend this one as it smells lovely and is reiki charged. Perform the same ritual but instead of smoke you spray the space.

You can also make your own spray with sage essential oil if you prefer. There are tons of DIY on Pinterest.

Try this great scented Reiki Charged sage smudging spray. You’ll love the scent and you don’t have to worry about smoke. Give this great alternative a try here. 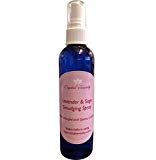 You can also use incense scents in Palo Santo or sage in this form for smudging.  You can pick whichever option works best for you and the space you’re in, it’s your choice.

Great to do after family gatherings such as parties, Thanksgiving, Holiday dinners and the like.  You can do this after everyone leaves or even the next day to clear the energy that was brought by others and cleanse the space.

You and I have different preferences for what we feel works best for us.  Try different techniques and do what feels right for you. You may prefer Palo Santo over sage or spray over burning.  There is no right or wrong way to smudge. The point is to do it and adapt as needed.

I wish you peace and guidance on your journey. Take care and be well.

The post The ancient practice of Smudging and why you should do it appeared first on Inspire Health and Spirit.

The ancient practice of Smudging and why you should do it