Daily Cialis comes in tablets of 2.5 or 5 milligrams, which are to be taken daily to ensure you’ll be ready for action whenever the need arises

John Mcafee: I’m not an anarchist, I’…
A guide to male enhancement – Tacklin…
Incidence and Prevalence of Top 5 Eye…
Bed Bugs Bites: What Do Bed Bug Bites…
Quote of the day

Medical science has not yet developed a cure for erectile dysfunction. In other words, there is no one-and-done medical procedure or short-term course of medication that will restore an impotent man to normal erectile function.

The next best thing, however, is a pill that, taken daily, ensures a man the ability to get and keep an erection whenever the need arises. Known as daily Cialis, that pill contains the same active ingredient — tadalafil — as the original Cialis, an on-demand medication designed to be taken 30 to 60 minutes before sexual activity is expected to begin.

Each daily Cialis tablet contains a relatively low dose — 2.5 to 5 milligrams — of tadalafil that over a period of less than a week builds up sufficient levels of tadalafil in the bloodstream to restore erectile function to men who’ve lost it because of insufficient Blood flow to the penis.

Such vascular problems are the single biggest cause of ED, which was once believed to be mostly psychological in origin. Actually, impotence that has its roots in psychological causes accounts for only 10 to 20 percent of all impotence and is not likely to respond to medications such as Cialis, which focuses on vascular insufficiency.

Daily Cialis differs from Cialis as needed and other ED medications, such as Viagra, Levitra, and Stendra, primarily for its ability to deliver 24/7 erectile function when needed to those men who take it faithfully every day. As previously noted, it also differs from its on-demand counterpart in its smaller dose of tadalafil, the active ingredient in both formulations of Cialis.

The medical scientists who developed the original Cialis — designed to be taken as needed in a dose of 10 to 20 milligrams — realized early on that the drug’s active ingredient had a surprisingly long half-life. Half-life refers to the time it takes for the blood level of a medication to fall to half of its original concentration. This lengthy half-life gave Cialis as needed a duration of action — up to 36 hours — far longer than the other ED drugs on the market, which typically last for four to six hours.

They theorized — correctly, as it turns out — that if a man were to take a dose of 2.5 to 5 milligrams daily, he would in a short time build up enough tadalafil in his blood stream to allow relatively normal erectile function whenever the moment was right. Thus was born daily Cialis, which was first approved by the Food and Drug Administration in early 2008, less than five years after the drug’s on-demand version got the go-ahead from the FDA. Although daily Cialis’s recommended starting dose is 5 milligrams daily, some men find they can get the desired results with a daily dose of only 2.5 milligrams.

Takes Up to a Week to Start

Because the daily drug’s effectiveness depends upon the maintenance of a certain blood level of tadalafil in the bloodstream, it takes up to a week before its effects are fully realized. However, from that point onward, a man taking daily Cialis should be able to get and keep an erection strong and long-lasting enough for intercourse whenever the need arises.

Although the dosage strength of daily Cialis is lower than that of the drug’s on-demand version, it still can cause some side effects, most of which are mild and may disappear altogether after the pill has been taken awhile. The most common of these side effects include back pain, flushing, headache, diarrhea, indigestion, muscle aches, and runny or stuffy nose.

Men who take nitrate-based drugs for the treatment of angina or persistently high blood pressure must never take Cialis. Both nitrates and the active ingredient in Cialis depress blood pressure, Taken together, they could cause a potentially life-threatening drop in blood pressure.

Talk to Your Doctor

It’s probably best to consult with your doctor before starting Cialis, which like the other ED drugs belongs to a family of medications known as PDE5 inhibitors. While clinical trials demonstrate that the drug is safe and effective for most men, it may be inappropriate for those with certain medical conditions, including cardiac problems, pulmonary hypertension, low blood pressure, blood cell problems, kidney or liver problems, stomach ulcers or some other bleed problem, and stroke.

The tadalafil in both formulations of Cialis is known as a PDE5 inhibitor because it temporarily disables the phosphodiesterase enzyme that can interfere with blood flow to the penis. The PDE5 enzyme breaks down a substance known as cyclic guanosine monophosphate, or cGMP, a key player in the erection process. It is cGMP that triggers the relaxation of the smooth muscle tissue lining the arteries that supply the penis. As these muscles relax, the blood vessels dilate, temporarily increasing the blood flow into the penis and facilitating erection. 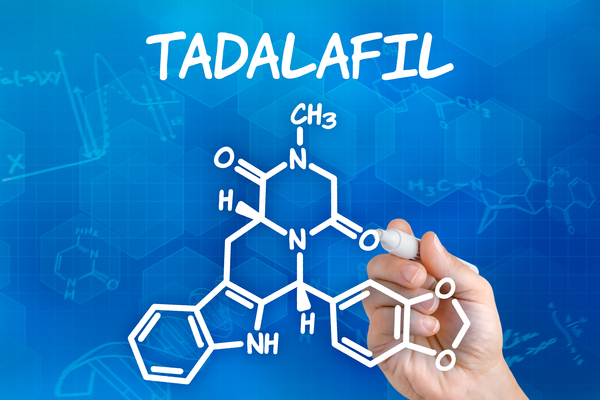 The active ingredient in daily Cialis is tadalafil, a member of a family of drugs known as PDE5 inhibitors.

If daily Cialis appeals to you and you would like to order it online, consider placing your order through eDrugstore.com, a reliable online supplier that’s based in Tempe, Arizona, and sells only FDA-approved medications sourced from licensed U.S. pharmacies. If you don’t yet have a prescription, eDrugstore can set up a convenient online consultation with one of its team of licensed U.S. physicians. To get started, click below to visit eDrugstore’s ED Medication Guide.