He came. He failed. He conquered.

The last 10 years had been spent in a mad rush, executing the following:

7 hours of each day were spent behind the wheel, alone.

He’d wake up every day at 3 am, drive 3.5 hours to Changad in Kolhapur, where the farm was located, pick up the produce of the day, drive back another 3.5 hours and then deliver it individually to 60 restaurants and hotels across Goa.

And he was successful. In part.

His soil, enriched with vermicompost, Amrit Pani and other organic inputs, was now fertile and the envy of local farmers.

The vermicompost unit was yielding 10 tonnes of high grade organic fertiliser per year and was widely reproduced by peers.

He had come to be well-known in the procurement circles as the lettuce-giving Salad Baba. Every 5-star hotel property in the state bought his organic vegetables.

There was just one problem: he hadn’t made any money. The salad business, he discovered, was not lucrative.

“If you’ve been doing a business for 10 years and haven’t made any money, people look at you sideways. They think you’re a complete idiot,” laughed Gower, during a recent interview.

Gower decided to attempt a pivot away from the salad produce business towards organic groceries.

He realised that although he had not earned much money during his decade-long slog, he had managed to earn the one important asset that could tide him over—warm relations fostered over a decade with a large network of farmers across Maharashtra and Karnataka.

“At the time, farmers were paid very poorly. Between the farmer and the consumer would be a succession of 4-5 middlemen eating away at the profits and leaving precious little for the farmers,” says Gower.

He decided to sell organic foods and create markets for these farmers.

He took on the incumbencies of logistics, marketing, and sales to become the all-in-one middleman. The farmers were pleased with the premiums being offered.

Gower was clear he did not want to enter the Indian kitchen items space, with spices, etc, as it was crowded.

As he had done with the salads, he wanted to offer products directed at the expat crowd in Goa, which was prolific back in the 90s.

He zoned in on Rice Cakes, as he noticed no one else was making them and their production was relatively cost-friendly.

His reverence for legacy grains led him to come up with a range of millet-based and traditional rice cakes. In fact, Ambrosia is the first company in India to have come up with Millet-Based Rice Cakes. 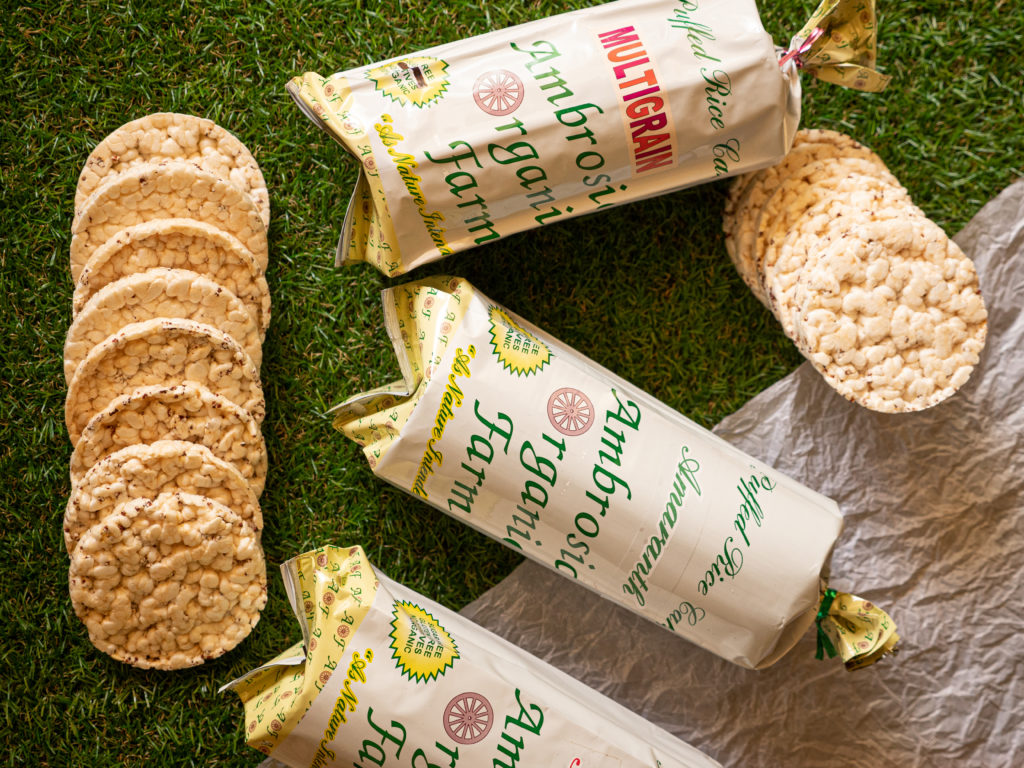 The idea worked. The business took off.

Wild Honey from the Nilgiris

A sugarcane farmer, impressed with the success of Ambrosia’s wild honey, requested Gower to sell his organic jaggery blocks. The latter asked him to crush them into powder and then sold the powder as ‘Golden Sugar’ to foreigners. It eventually became a crowd favourite.

Along with his German wife, Michelle Keleman, he lives in his Parra (Goa) house, which doubles up as a packaging unit for the company.

Backbreaking 14-hour work shifts have given way to cursory supervision. And some well-deserved leisure time.

He is no longer the solo nose-to-the-grindstone worker he once was, nor does he need to be. He now has a team of 45 shouldering the weight.

Ambrosia has amplified its acreage to 35, with another 95 acres belonging to 10 associate farmers from neighbouring areas.

Across India, they have a trusted phalanx of 2,000 farmers spanning Karnataka, Maharashtra, Rajasthan, Tamil Nadu and Himachal Pradesh.

Since most of the farmers in India have small landholdings of 2 acres on average, Ambrosia does not insist on organic certification. However, they do screen their farmers carefully and only associate with those that are strictly organic. 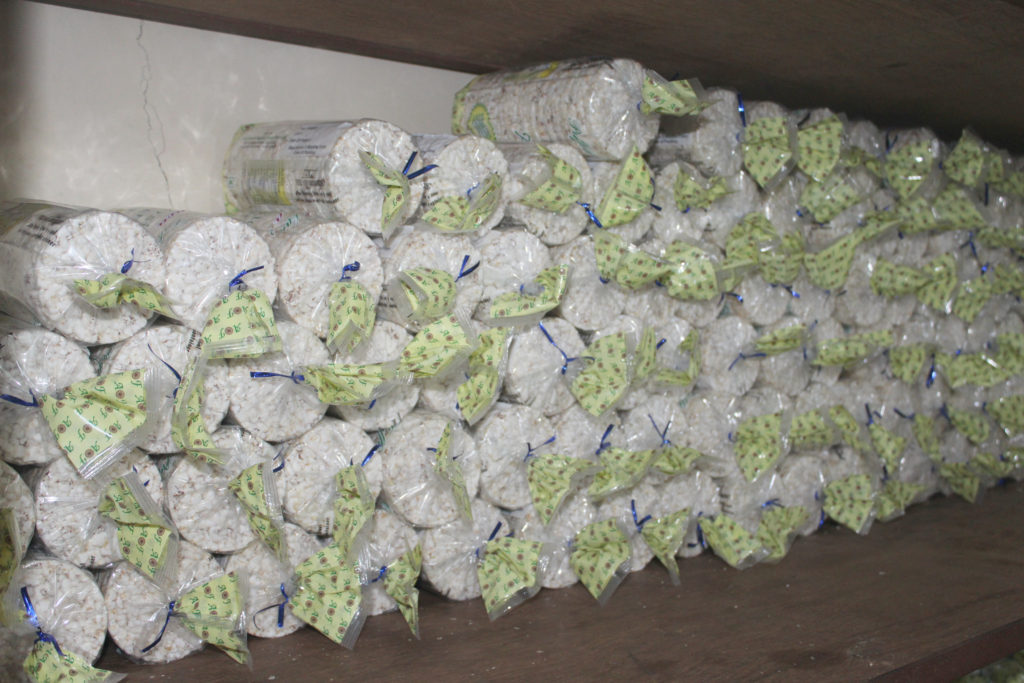 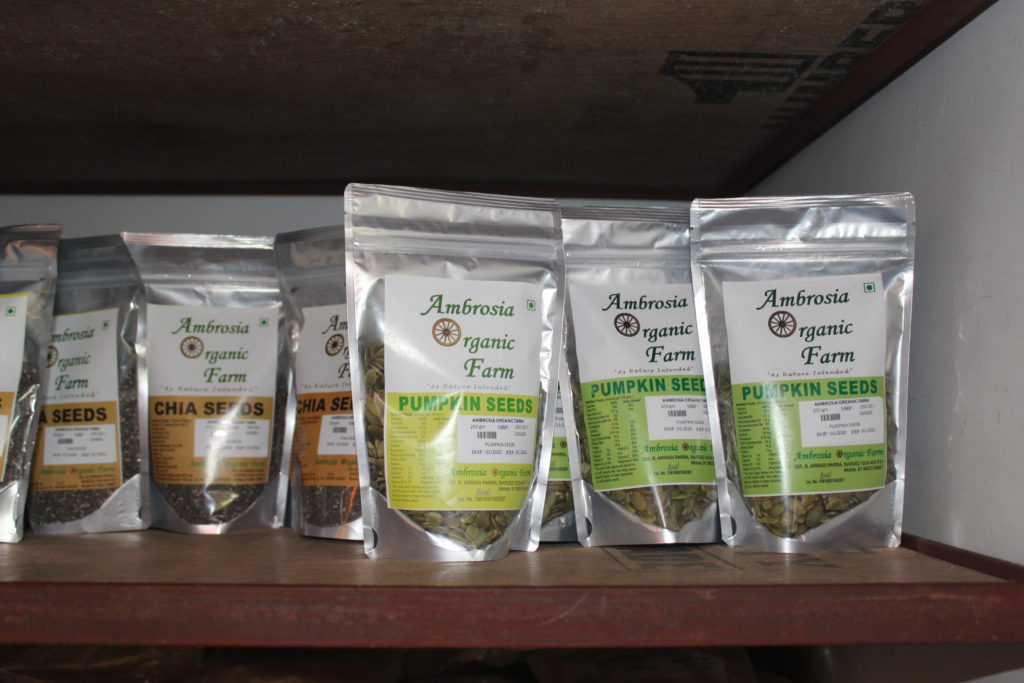 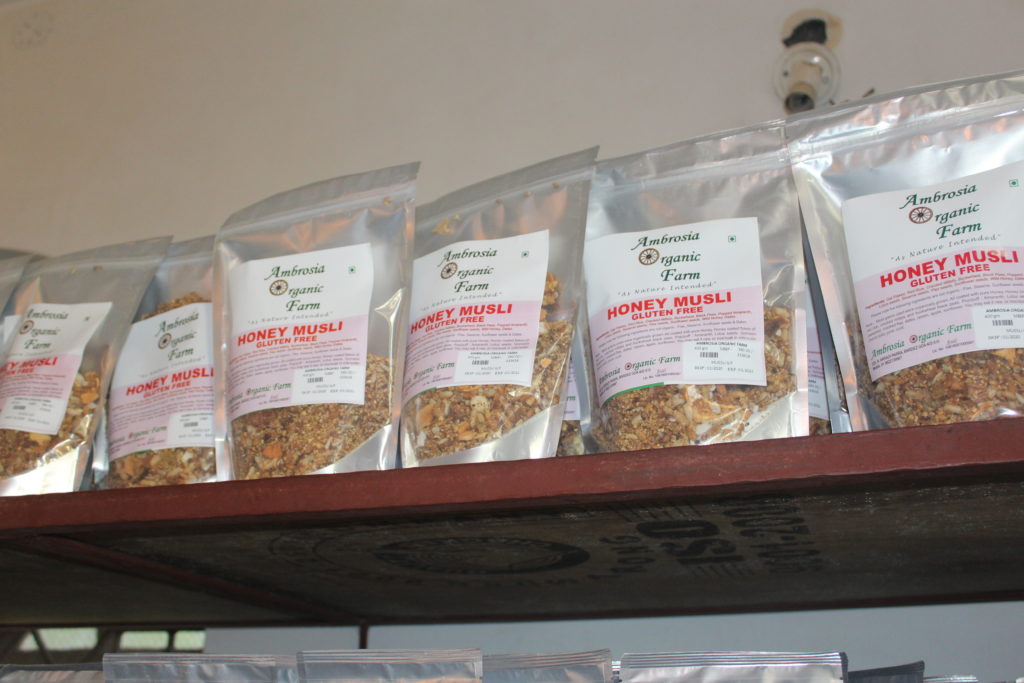 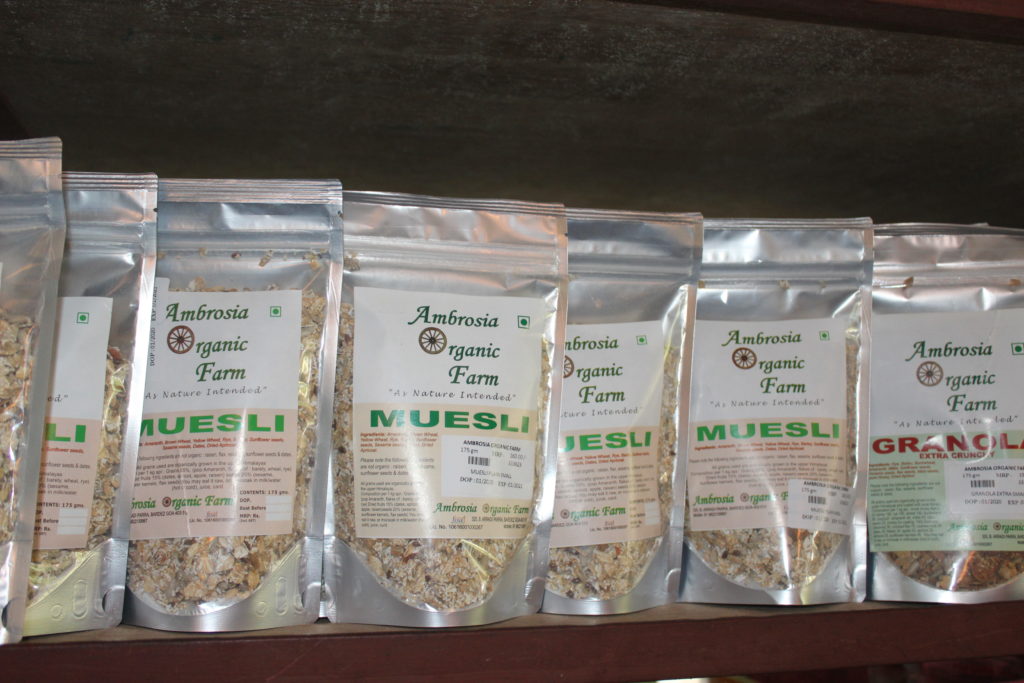 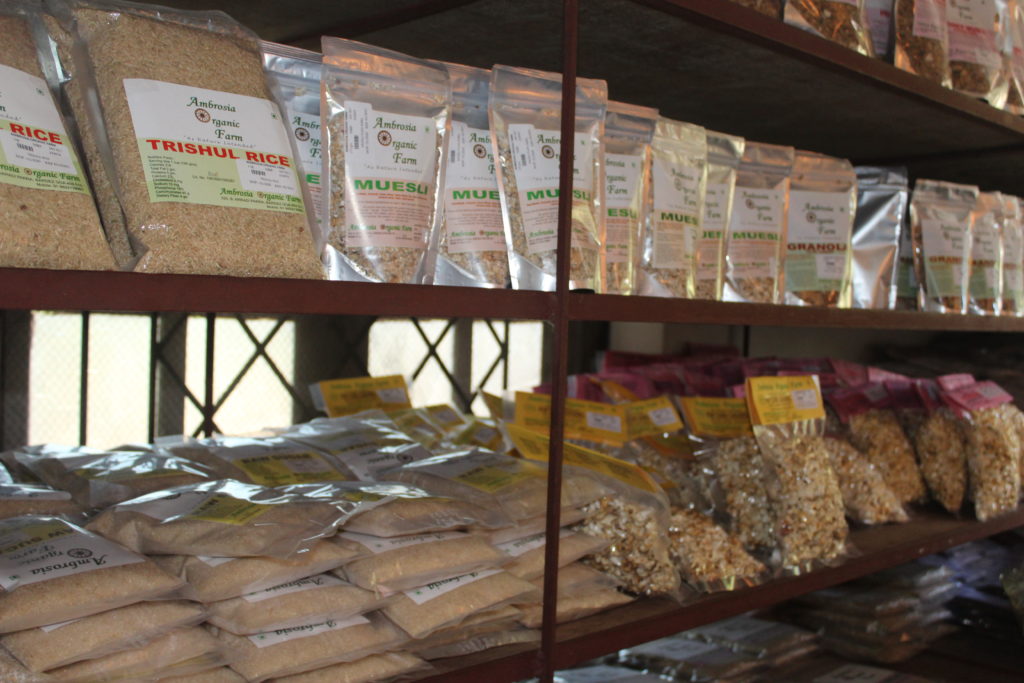 The growing business needed new blood, and in 2018, Gower passed the baton to business partner and adopted son, John Dmello (Janardan Khorate prior to adoption), who has taken Ambrosia pan-India. The company now has two directors—Dmello and Gower.

“I’m the old Ambrosia. I represent where we came from. Where we are now, and where we’re going, is generation next. He’s young and he’s done so much for building up the company. I’m very old school. He’s the new school. He understands marketing,” Gower showers praise on his son.

Dmello’s biological father is a farmer, as well as, a neighbour of Gower’s. In 2008, a freshly graduated Dmello joined Ambrosia as an intern and helped the business grow manifold.

The brand also sells its products through its e-commerce website, 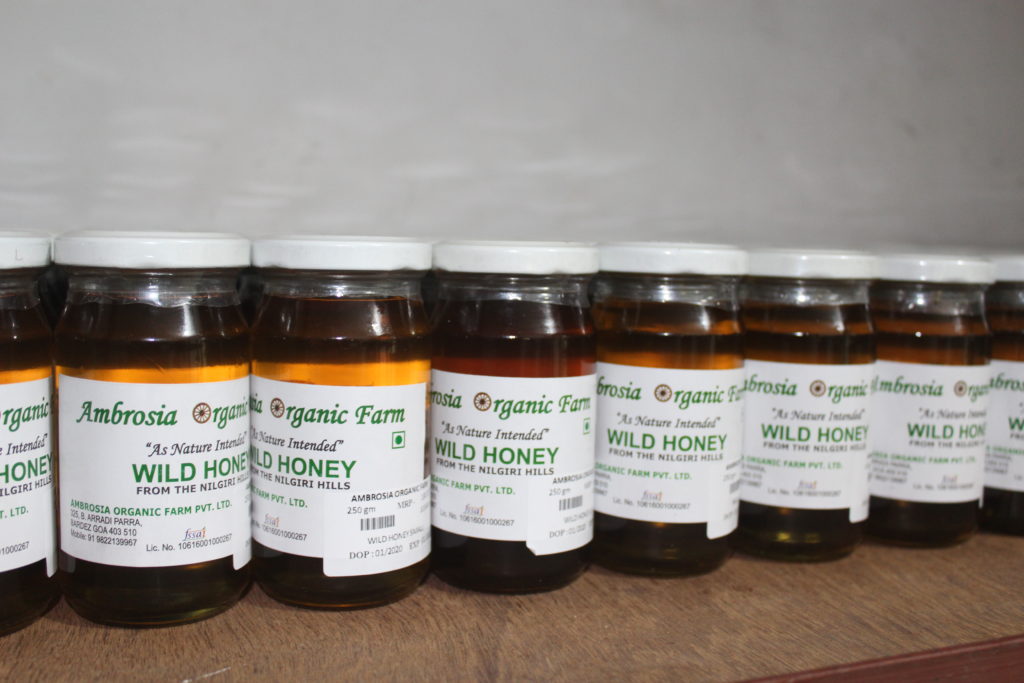 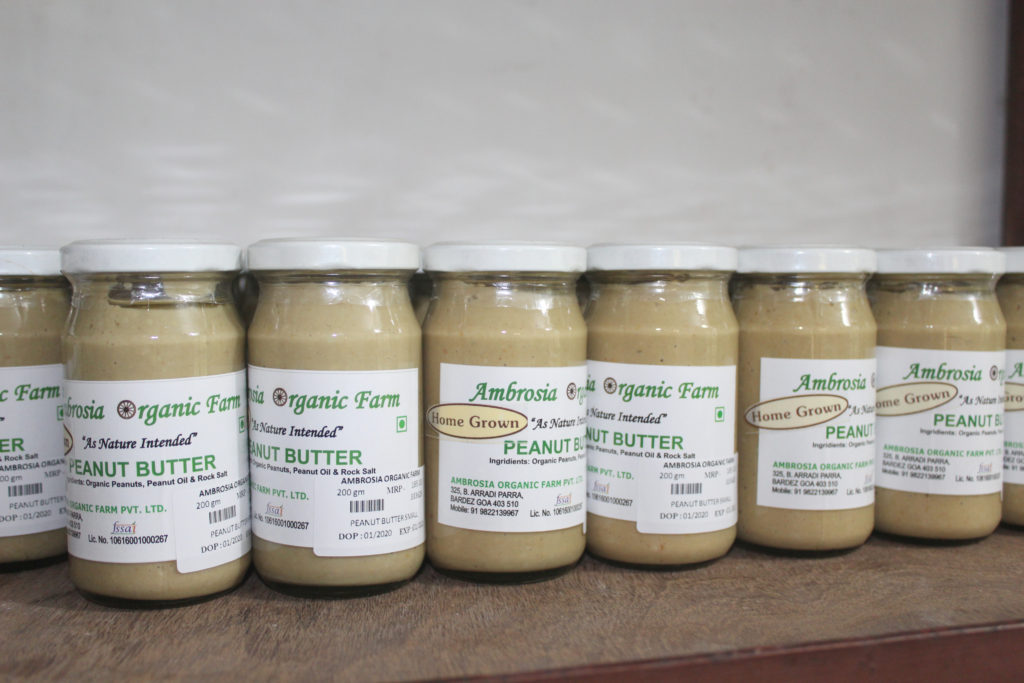 Although Ambrosia’s product range was conceived as snacks for the western palate, the domestic market has matured and indigenous demand has long surpassed meagre expat consumption.

The company has been growing steadily at 35-40% year-on-year, with the exception of 2020. For Ambrosia, the pandemic served as a tailwind, leading to a surge of 300% in sales.

With Dmello at the helm as General Manager, Gower is keen to go back to what he loves best: learning.

He wants to learn about the latest developments in the field of organic cultivation and is hatching a return to fresh produce farming, which he misses dearly.

“For me it’s always been about the learning process. And I’m still learning,” says Gower.

Ambrosia was the first to cultivate lettuce, arugula and heirloom tomatoes in Goa. In the beginning, fellow farmers would ask Gower about the lettuce, “What flowers are these?”

Most of them thought that they were looking at foreign flowers and had difficulty understanding that lettuce was a vegetable that was consumed uncooked!

The Bestselling Peanut Butter in Goa

What Drew David Gower To Goa

Previously, Gower lived in London and worked in the oil and gas industry.

He also briefly tried his hand at the floriculture business in Holland.

The Goa of the 70s reminded Gower of his childhood as it was behind the UK by 20 years in development. This was the main reason he had been visiting the state since 1978.

Finally, in 1995, he took the plunge. He moved to Goa, bag and baggage, with the intent to build a new life.

How Gower Nurtured His Soil

In the initial days, Gower would collect wet waste from restaurants to use as soil input. Then, he discovered vermicompost. He purchased 2 kg of vermiculture from a gentleman in Pune and eventually made a ‘worm house’.

The soil in Goa and the Deccan at large, is calcium-deficient, so Gower started mixing seashell powder into the soil in order to compensate. He also added crushed blue stone (rock phosphate) in the compost.

Using these techniques, along with the application of vedic organic practices and cow-based inputs such as Amrit Pani, he made his soil rich and fertile.