Mutations in BRCA1 or BRCA2 tumor suppressor genes increase the risk of breast and ovarian cancer. In clinical practice, these cancer patients often receive targeted poly ADP ribose polymerase (PARP) inhibitors treatment. According to a recent study published in the journal Science, Stephen C. West from the Francis Crick Institute in the UK showed that inhibition of DNPH1, a protein that eliminates the cytotoxic nucleotide 5-hydroxymethyl-deoxyuridine (hmdU) monophosphate, enhances the sensitivity of BRCA deficient cells to PARP inhibitor (PARPi). Further studies revealed that the drug’s lethality is based on the effect of SMUG1 glycosylase on genomic Hmdu, leading to PARP capture, replication fork collapse, DNA fragmentation, and apoptosis. By using hmdU and DNPH1 inhibition, PARPi resistant BRCA1 deficient cells could be re-sensitized. Since genomic hmdU is a key determinant of PARPi sensitivity, targeting DNPH1 provides a promising solution for BRCA deficient cancers to improve their tolerance to PARPi therapy.

In this study, the CRISPR technique was used to screen the regulatory elements of PARPi sensitivity. Based on the lentivirus method, the CRISPR whole-genome library was introduced into Mus81 – / – cells (a cell line with homologous recombination defect), and then treated with olaparib for 10 days. This screening method helps to identify the deletion (sensitization) and enrichment (drug resistance) of sgRNA (gRNA). MAGeCK (model-based genome-wide CRISPR-cas9 knockout analysis) algorithm was used for bioinformatics analysis of gRNA readings, and several determinants of cell sensitivity to PARPi were identified. 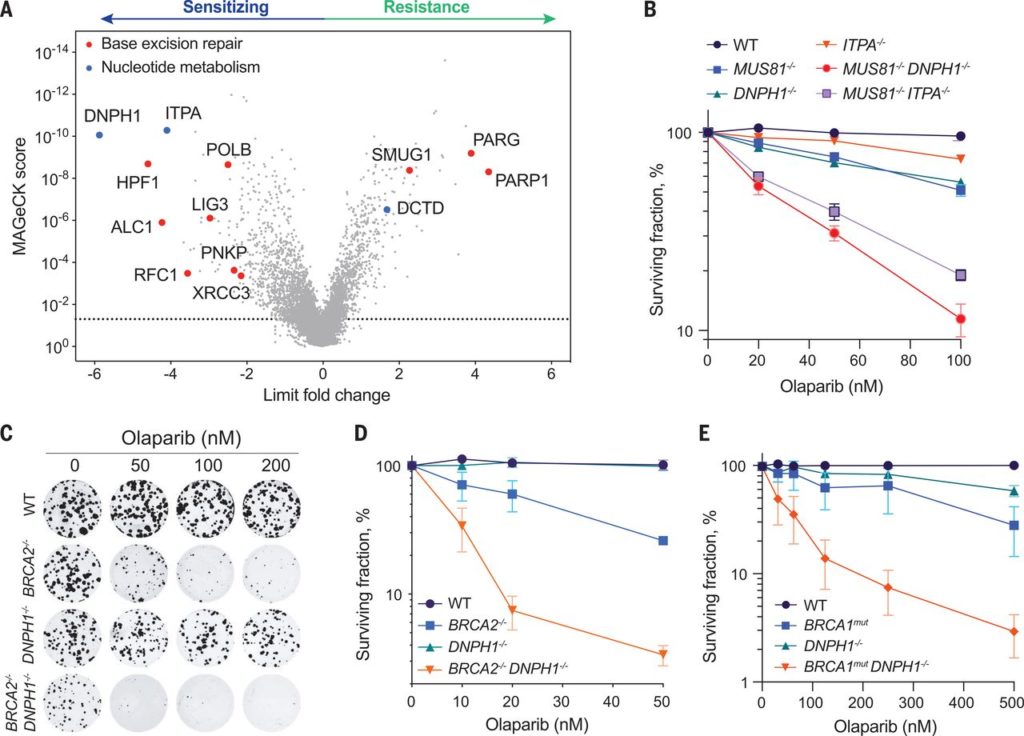 DNPH1 (2 ‘- deoxynucleoside 5’ – monophosphate N-glycosidase, also known as RCL), which is the target of c-Myc protein overexpressed in a variety of tumors, ranks the highest in the screening results. Therefore, scientists believe that DNPH1 may participate in the “rescue” pathway of nucleotides and play a defensive role: removing modified or abnormal nucleotides from the nucleotide library to prevent their incorporation into DNA. The destruction of ITPA (inosine triphosphatase), the second nucleotide “rescue” molecule, also makes Mus81 – / – cells sensitive to olaparib: by dephosphorylating deoxyinosine triphosphate to limit its incorporation into DNA. DNPH1 and ITPA have also been identified in previous PARPi screening. In order to verify their functions, they used a single CRISPR knockout cell line for a second test. The results showed that the destruction of any gene in eHAP cells would not affect the growth or survival of the cells, but the defect of any gene would make Mus81 – / – cells lacking HR sensitive to olaparib therapy. These results suggest that the target nucleotides of DNPH1 and ITPA are potential sources of endogenous DNA damage in PARPi cells.

Previous studies have shown that DNPH1 has the ability to hydrolyze DNMP in vitro, but its target and biological function in vivo is still unknown. In order to identify the target of DNPH1, they performed a metabonomic analysis of the nucleoside composition of genomic DNA in WT, DNPH1 – / -, and ITPA – / – cells. The results showed that more genomic deoxyinosine (DI) was found in ITPA – / – cells. However, in DNPH1 – / – cells, 5-hydroxymethyl-deoxyuridine (hmdU) in genomic DNA increased specifically. HmdU is a cytotoxic nucleoside, which is caused by oxidative damage of thymidine or deamination of 5-hydroxymethyl-deoxycytidine (hmdC) during epigenetic regulation. In addition, the authors did not observe significant changes in other genomic nucleosides. The quantitative analysis of hmdU showed that the number of DNNS in wild type and DNPH1 – / – cells was about 5 and 15, respectively. Because DNPH1 hydrolyzes DNMP, these results indicate that DNPH1 acts on hmdU monophosphate (hmdUMP) in the nucleotide pool, thus limiting its incorporation into genomic DNA. By analyzing the nucleotide library, they found that the hmdUMP in DNPH1 – / – cells treated with hmdU increased 10 times compared with WT cells, while the hmdU modification in the genome increased only about three times. These results indicate that DNPH1 acts on hmdUMP to limit its incorporation into DNA.

Finally, the author found that hmdU genome modification can make HR deficient cells more sensitive to PARPi, which proves that targeting DNPH1 is a new method to improve the therapeutic effect of PARPi tolerant cancer cells.