Genes And Vitamin B9 (Folate) Requirements

Folate, also known as Vitamin B9, is a water-soluble B vitamin. It is naturally found in many Folate-containing foods like spinach, broccoli, avocados, and lentils.

Apart from natural sources, the synthetic form of folate, Folic Acid, is also sold as a supplement. This form is supposedly absorbed better by the body.

Lucy Wills, a researcher, was the first one to identify folate and its function, in 1931. She demonstrated that anemia in pregnant women could be prevented/reversed with brewer's yeast. In the late 1930s, folate was isolated from brewer's yeast.

It was first extracted from spinach in 1941 - the term "folic" is from the Latin word 'Folium', which means leaf.

Further, the crystalline form of folate was extracted in 1943, which was the basis of the synthesis of Aminopterin, a derivative of folic acid.

Aminopterin was the first-ever anticancer drug developed, and its clinical efficacy was proved in 1948.

The Significance of Vitamin B9

Vitamin D and folate are linked by their disparate sensitivities to Ultra Violet Radiation (UVR). While UVR stimulates the production of Vitamin D in the skin, it degrades folate through oxidation.

The hypothesis suggests that skin pigmentation may have evolved to maintain a balance in the levels of these vitamins.

The VDR gene provides instructions for making a protein called Vitamin D Receptor, which allows the body to take in vitamin D. The different variants of the VDR genes are present in different frequencies across populations.

The difference in the frequency of these alleles across different ethnic populations can be attributed to the different UV regimes.

For example, in regions where there’s a higher exposure to UVR, the frequency of a thermolabile MTHFR variant, C677T, is less.

These findings collectively provide strong molecular support to the Vitamin D-Folate hypothesis and showcase the existence of interactions between UVR, skin type, and vitamin D and folate genes.

In order to understand the recommended dosage of folic acid, the following terms are important:

It is important to note that the bioavailability of folate depends on the source. Synthetic vitamin B9 (folic acid) is readily absorbed (about 85%) into the body, compared to folate from food sources (about 50%). Dietary Folate Equivalent (DFE) was developed to reflect the total amount of bioavailable folic acid.

1 mcg DFE = 1 mcg food folate = 0.6 mcg of fortified foods/supplements taken with foods = 0.5 mcg folic acid in the form of a supplement (taken on an empty stomach).

A healthy adult needs 400mcg DFE folate daily. Pregnant women need 600 mcg of folate per day to meet the requirements of the growing fetus as well.

MTYL1 gene is located on chromosome 2.

It codes for myelin transcription factor 1, which is expressed in the neuronal tissues.

A variant in this gene is linked with serum folate levels.

This gives an initial idea of an association between folate levels and depression and schizophrenia. 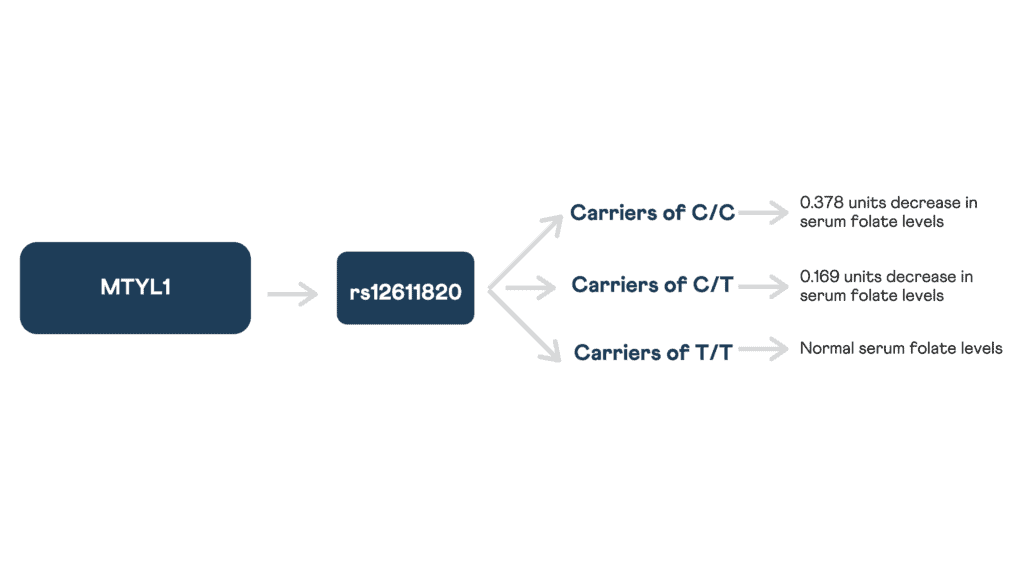 The MTHFR gene is located on chromosome 1. It codes for an enzyme called methylenetetrahydrofolate reductase, which plays a role in processing amino acids. This enzyme is involved in a chemical reaction that processes folate to its primary form (5-methyl tetrahydrofolate) found in the blood.

This compound is necessary for the multistep process that converts homocysteine to methionine.

In the normal functioning of the body, there is a balance between homocysteine and folate levels. However, when this balance is disturbed, it leads to health effects.

Mutations in the MTHFR gene have been associated with high homocysteine and low folate levels, both of which are harmful to the body.

rs1801133The most-studied variant of the MTHFR gene is 677T←C (rs1801133) in exon 5. The 677T variant has been studied to be less effective in the conversion of 5,10-methylenetetrahydrofolate to 5-methyltetrahydrofolate.

Thus, the serum folate concentration is lower in individuals with the 677TT genotype than in those with 677CC or 677CT genotypes. 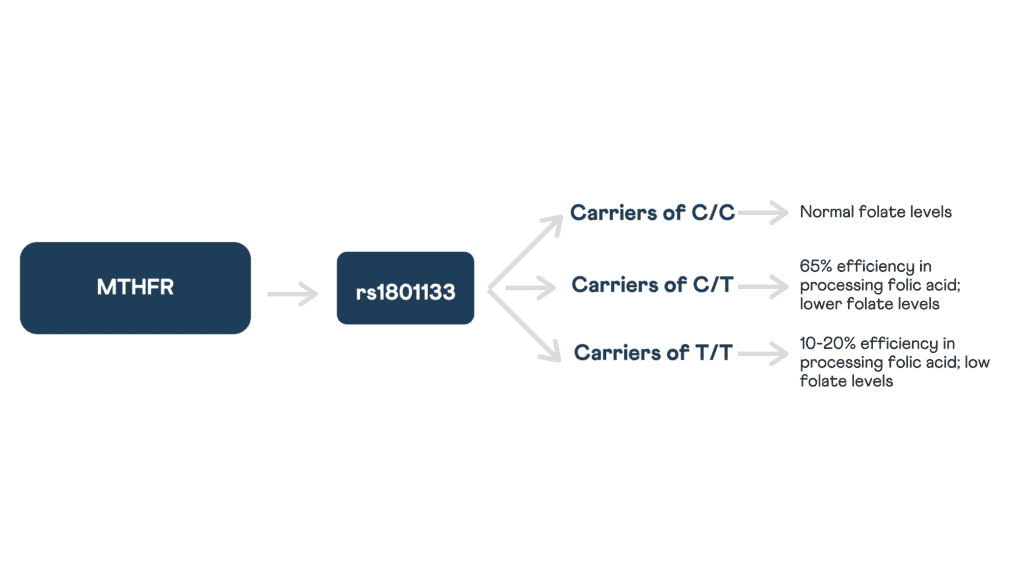 Can Folate Deficiency Be Inherited?

This condition is inherited in an autosomal recessive manner.

Now, for the expression of a recessive trait, both parents must pass on their recessive versions of traits.

A random process selects the gene to be passed down to the next generation.

In the case of autosomal recessive conditions, there is a 25% chance of occurrence.

If just one parent passes it on, the child will remain healthy but acts as a carrier of the gene.

Carriers could potentially pass it on to the coming generations. 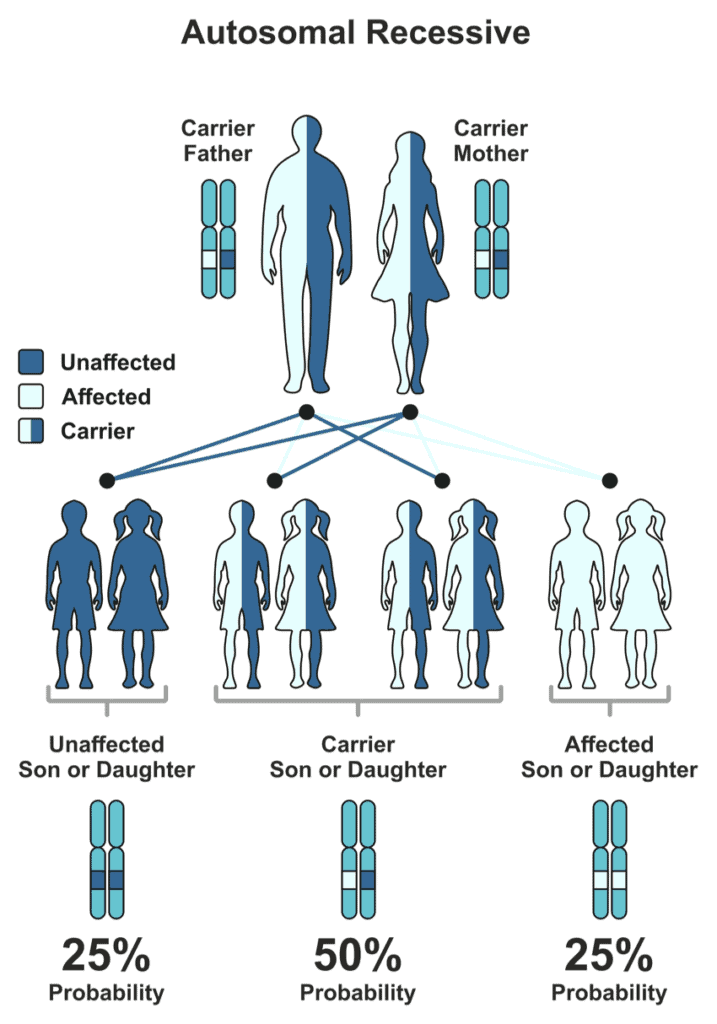 What Are The Signs And Symptoms Of Folate Deficiency

Who’s at risk for folate inadequacy

It is rare to reach a toxicity level from consuming folate via natural food sources. An arbitrary upper limit for folic acid on a daily basis is 1000mcg.

Since vitamin B9 is water-soluble, it needs to be replenished in the body on a daily basis. There are a lot of sources of vitamin B9.

Folate is also available in the form of dietary supplements. Multivitamin supplements and B-complex tablets usually contain folic acid. These supplements are advised for individuals that have a mutation in the MTHFR gene.

It is recommended to take the active form of folic acid (L-methyl folate, or 5-MTHF). It is beneficial to have folic acid supplements daily to ensure optimal nutrient health for an individual.

Folate is an important vitamin that helps in cell replication, production of RBCs, and the maintenance of healthy cells in the body.

It is a water-soluble vitamin and should be included in the daily diet for a healthy individual.

There are vast implications if an individual has folate deficiency, with symptoms ranging from mouth sores to life-threatening anemia.

Pregnant women should also be wary of the amount of folic acid in their diet, as it can heavily impact the health of the fetus.

An individual can have inadequate folic levels because of an unbalanced diet, genetic variations, or other risk factors.

Folate deficient individuals can meet their requirements by adjusting their diet or taking supplements. When it comes to supplements, the dosage is an important factor.

Excess folate consumption can lead to folate toxicity the could result in a decline in cognition.

Thus, as always, it is recommended to consult a physician before starting any supplementation.

The post Genes And Vitamin B9 (Folate) Requirements appeared first on Xcode Life.

Genes And Vitamin B9 (Folate) Requirements