Which Programming Languages are Best for an eCommerce Site? 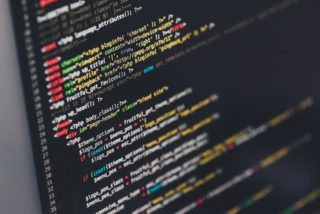 The Programming Language you choose has to be able to handle all the functions and aspects of your growing eCommerce store.

If you are familiar with or interested in programming languages, you may wonder which language you should use to build your eCommerce website. There are many different languages to choose from, each with its own benefits and drawbacks.

Keep in mind, you don’t have to code your entire website yourself. You’ll soon see why many entrepreneurs who are not familiar with code use an eCommerce builder to create their website instead. It’s simpler, easier, and helps you get on with building your business faster.

However, if you have a dedicated programmer on staff, or aren’t too shabby writing code yourself, there are certainly benefits to programming your ecommerce website yourself; among them, ultimate customization and complete ownership of your process.

So if you do decide to take the programming reigns yourself, consider the following languages that can help you do so.

PHP, or hypertext preprocessor, is one of the simplest server-side programming languages in existence. Plus, it was designed specifically for web development.

WordPress is largely built with PHP, so you could definitely use it to create a blog, website, or eCommerce store.

Many hosted eCommerce platforms are built with Ruby.

Ruby on Rails is a popular web framework built using Ruby programming language. Ruby itself is most commonly used in Rails applications to create all kinds of things online.

Python is a very popular general purpose programming language. You can create web pages, games, even a search engine using Python. Python is easy to read and easy-to-learn, especially for first-time coders.

With Django, you can build better web apps quickly with less code. It could be a compromise for someone looking to code their own website, without having to reinvent the wheel.

Java is versatile, compatible, and functional for so many different applications. You can use Java to code software, apps, and websites. Plus, it works across devices!

Here’s the question: do you really want to code an entire eCommerce website? Are you looking for a challenge? Do you want to flex your coding muscles? Or are you looking to build an eCommerce business?

Some coders might enjoy the challenge of coding an eCommerce website, but for most business builders, there are easier ways to get an eCommerce store off the ground.

You can certainly use a programming language to customize your website, but starting with a framework instead of from scratch can save you a load of headaches.

That is, if you’d like to build from scratch at all.

However, the temptation to get down to business faster by opting for a hosted platform is always there.

In the end only you’ll know your immediate and long-term goals, and weighing whether to go hosted or self-hosted for your eCommerce undertaking depends on it!

Which Programming Languages are Best for an eCommerce Site?