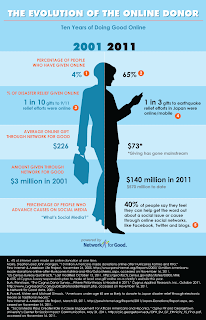 In 2001, only 4 percent of donors had given online. This year, about 65 percent have given to charity through the Internet.

In 2001, the average donation through the site was $226. But this year the average gift is $73, a change that Network for Good interprets as a sign that online giving has “gone mainstream.”

Just a couple of the comparisons made in a new graphic from Network for Good, a fund-raising and volunteerism Web site that celebrates its 10th anniversary this month.